0 Comments
It seems like there’s a lot of turmoil in the world right now, maybe there always has been. But it’s good to be aware of what’s happening outside of your bubble and help where you can, writes Fraser Thompson.

And in this case, one of the ways you can help also involves experiencing some great live music. 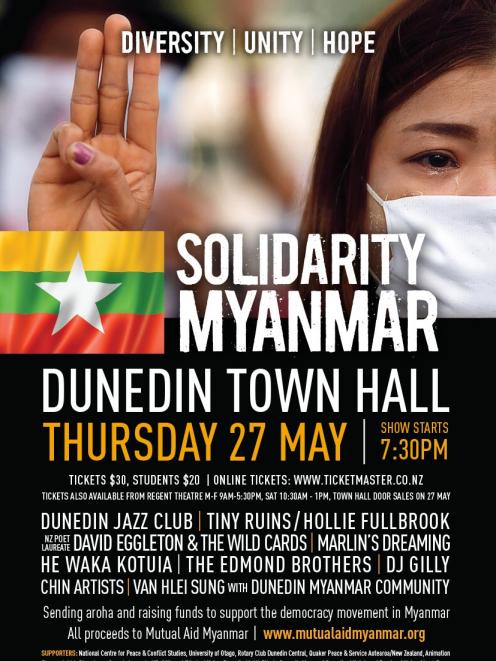 Solidarity Myanmar is a concert organised by the local Myanmar community with the aim of spreading awareness and raising funds for the people of Myanmar.

Playing at the event will be performers from the local and national Myanmar community, as well as Hollie Fullbrook, of Tiny Ruins, local indie band Marlin’s Dreaming, and many, many more.

I spoke to Su Dali Than, one of the organisers. She explained the gravity of the ongoing situation.

"Since February 1, the military have taken over; they’ve staged a coup on the basis of fraudulent voting, but there’s been no evidence of that.

"And things have just escalated from that, and now [there are] weapons, real live machine guns, to kill innocent people, arrest people, raze people’s homes ...

"They’ve shut off internet [so] there’s no contact coming out. The only way you can get contact is if your family is able to find a line whenever they are comfortable to call you, without being listened into."

One of the issues the Myanmar community faces is a general lack of awareness of Myanmar, a country that has a population equivalent to that of England.

Su Dali says she hopes this event will help spread awareness of Myanmar, and the adversity its citizens face, but adds that the fundraising aspect is also crucial as homes can’t be rebuilt with awareness alone.

"The funds we send back home will be through Mutual Aid Myanmar, which is a subgroup of I Support Myanmar and they have grass roots organisations that they work with in Myanmar and through Thailand.

"They haven’t fully disclosed those grassroots organisations for security reasons because if you’re seen helping people ... you will be arrested or you will be called for treason.

"Our country was already affected by coronavirus and people have already lost homes and family members, but now that this has happened even more people have lost their homes."

The concert has a great line-up for an extremely solid cause, and is a rare opportunity to experience the culture of Myanmar alongside more familiar entities.

"Our performances, we will have a few from our community in collaboration with a few other members from around New Zealand," Su Dali says.

As she explains, there’s some controversy about the country’s name. In the late 1980s, the military suppressed a democratic revolution and changed it from Burma to Myanmar as part of asserting control. Many people still living there refer to it as Myanmar but those who fled tend to refer to it as Burma.

"It’s a personal choice, some refer to it as Myanmar, especially those who’ve lived and grown up there, not as refugees like myself," Su Dali says.

"But nowadays we don’t have a problem if you want to call it Myanmar or Burma. I refer to it as Burma because I don’t want to be supporting the military."