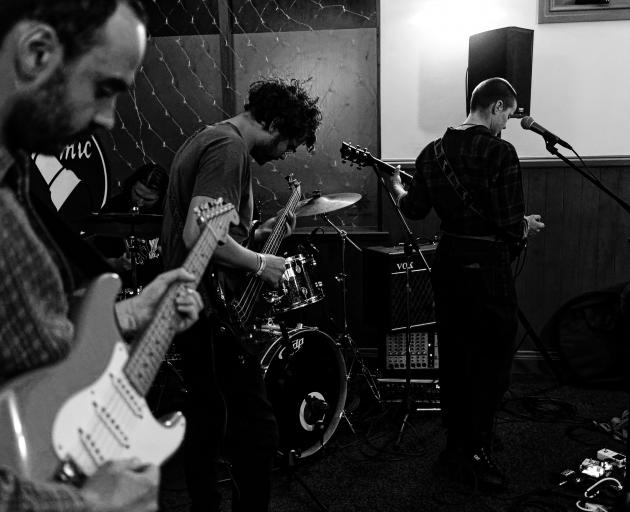 Bathysphere (from left) Peter McCall, Josh Nicholls and Richard Ley-Hamilton. Vocalist Julie Dunn is out of shot. PHOTO: SUPPLIED
The evolution of Bathysphere has been fascinating to witness.

Initially just Julie Dunn and a guitar, Bathysphere was a little rough around the edges, but then all the best music is, and the vibe was there.

It’s a hell of a line-up, and Dunn knows it.

"I just feel so safe with them because I just know that anything they’ll do will be amazing. It’s much more collaborative now, which I enjoy, I prefer that way of making music," she explains.

"It’s cool. I’ve liked that kind of development of the band because it felt like you can focus on one thing at a time at the start.

"It’s funny, I feel like the sound is very much a product of the four of us. I don’t tell Peter and Richard and Josh what to play, they just come up with their own parts."

Which brings us to their first album, Heaven is Other People. Smattered with heavy breakdowns, sporadic vocals, and mid-tempo riffs, it’s a cold mix of indie jangle and coagulated sludge. It feels perfect for transitioning into winter.

"When we recorded it was real overcast and Peter came in and was, like, ‘it feels like a real Bathysphere day today’.

That vibe is the one thing which has stayed constant throughout the evolutions of Bathysphere, even from Dunn’s chilling first performance in the crypt of St Paul’s Cathedral.

The songs are spacious, and it works perfectly with musicians of this calibre, allowing them room to move around Dunn’s vocals, which are embedded in the music rather than sitting on top. The mixing is excellent, and it has the intensity and authenticity of something which was tracked fully live with minimal overdubs or massaging in post.

"We actually planned to do it in the The Attic, but on the day we had booked to do it, that was the day we got evicted forcibly and locked out.

So we just recorded, I think we did it in one day of live tracking, and then we just did overdubs and stuff the next day.

"It’s definitely been nice to just, like, not listen to it for a while and just have it sit there and now to release it. I feel like I’ve got a good space from it, which is good because it’s a bit of an emotional rollercoaster, to be honest."

Heaven is Other People Bathysphere album release, Saturday, May 8, the Crown Hotel with Dale Kerrigan and Francisca Griffin. $15