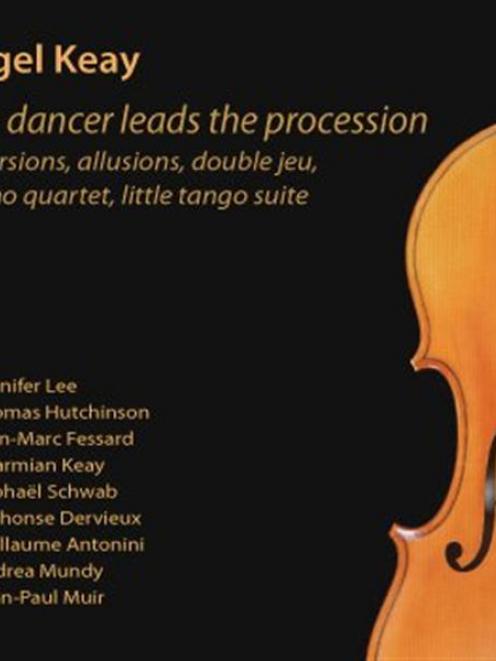 Nigel Keay, Mozart Fellow at the University of Otago in 1986 and 1987, has lived in Paris since 1998, being a full-time composer and viola player.

His music has not fundamentally changed with a French influence and this programme is partly retrospective, including Piano Quartet (1986) and title work The dancer leads the procession, begun in New Zealand but finished in 1999.

Diversions for quintet (2003), in three movements, is musically interesting for effective use of unusual instrumentation: oboe, clarinet, violin, viola and double bass.

(Oddly, only Prokofiev appears to have previously written for such a combination and then it was after he also had moved to Paris!)

The disc opens with its title track, a nine-minute solo piece played by pianist Jennifer Lee.

The three other works in its procession are: Little Tango Suite (2004), for solo piano; Double Jeu (2012), a viola duet; and Allusions (2013), for solo clarinet. Keay features on viola in two works, liking to be involved in performance as conductor or violist.

Other fine musicians employed are mainly French, an exception being the composer's daughter Charmian Keay, now an Auckland violinist.

Nigel's earlier works were sometimes atonal but since the 1990s his compositions have included more tonal elements.

They are often inspired by literary and philosophical ideas.

His early one-act dramatic opera At the Hawk's Well, based on W. B. Yeats' play, was once performed in Nelson but, sadly, has not been restaged since, so is not yet available on disc.

This CD was assisted by the New Zealand-France Friendship Fund (sales via www.nigelkeay.com).