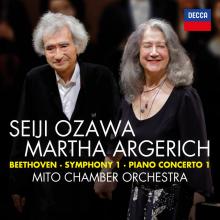 Musical legends Seiji Ozawa and Martha Argerich are together on record for the first time. They certainly prove music can keep people young and age is no bar to their brilliance.

Conductor Ozawa (82) and Argerich (76) first performed together 39 years ago when Argerich made her debut with the Boston Symphony Orchestra with a performance of Prokofiev's Piano Concerto No.3 that was "incendiary", according to the Boston Herald.

Since then, the pair have graced the world stage and their friendship has grown, but this is a first recording together (captured live during performances last year in Japan).

The 26-strong Mito Chamber Orchestra is a hand-picked group of international players established in 1990 under Ozawa's direction. This is its first international record release with the conductor.

The CD is also Ozawa's first since his Grammy award-winning Ravel in 2015. The symphony is played with sure spirit, learned by him when he first studied Beethoven under Japanese conductor Hideo Saito. He went on to study with Herbert Von Karajan in Berlin, and as Leonard Bernstein's assistant with the New York Philharmonic in the early 1960s.

Argerich plays the concerto with crisp and exciting speed, while the orchestra makes energised and sympathetic sounds to accompany her sparkling fingers on the keys - the dancing finale, in particular, is sure to impress. Beethoven's first concerto also shows all the spirit of his youth. It is pleasing to hear these sure performances. One may hope to hear more music from these musicians.