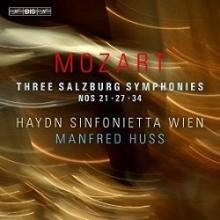 This splendid Vienna-based period-instruments ensemble (conducted by Manfred Huss) gives some thrilling performances on this disc.

They were originally released in 2006 but have now been remastered to give a clean and sparkling sound.

Symphony No.21 in A major and No.27 in G major belong to the period of Mozart’s music when he was a teenager, but are brief works that skip along with witty and joyful sounds.

They may be outclassed for most listeners, though, by Symphony No.34 in C major, which was composed in Salzburg seven years later (1780).

By then the Salzburg orchestras were bigger in size and in this recording the larger forces impress.

The music itself clearly moves away from the earlier "light music" conception of a symphony to a more serious and interesting symphonic musical style, containing more drama.

On this disc Mozart’s Menuetto K409 has been inserted as the third movement because the original minuet had been cut from the manuscript and this one fits perfectly.

Huss suggests in his notes in the accompanying booklet the composer actually intended it as the replacement.

Symphonic minuets were popular concert pieces in Vienna in the 1780s and may be why Mozart’s first publisher treated it as a stand-alone work.

Menuetto is the longest of any of Mozart’s minuets and certainly one of the most charming of his compositions.

For my ears the C major’s exciting finale and opening Allegro Vivace (without belittling the Andante) are also outstanding tracks in this disc.

Great to hear such wonderful energy and artistry in this performance.