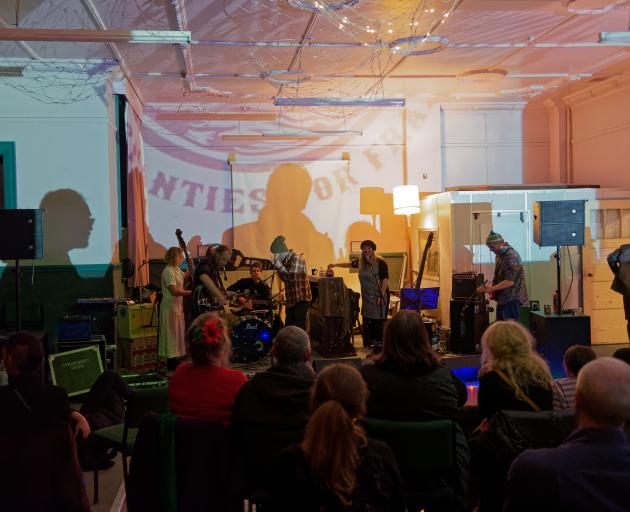 Tiny Pieces of Eight performing at King Edward Court earlier this year. Photo: Dunedinsound.com
Tiny Pieces of Eight are an amorphous five-piece which sometimes features three guitarists, two double basses, a pump organ, and a hell of a groove, and their wonderful 2019 album She Shanties for Frank is finally on vinyl.

Among the first bunch of records to be pressed at the brand-new vinyl pressing plant Holiday Records, in Auckland, the record was a DIY labour of love for the band.

"I guess I've always wanted to make a record because I love records, I love the sound, I love the bass sound," explains vocalist and songwriter Deirdre Newell.

"Yeah, so I think we were number five and then the steam thing exploded and we were late ... But they upgraded us to 180g."

For the record sleeves they adopted a technique used in Jamaica. They recycled old sleeves, turning them inside out and printing their album art on what was previously the inside. If you peek inside your She Shanties for Frank vinyl sleeve you'll catch a glimpse of a totally different record from a completely different time.

It's pretty neat, and makes sense given the amount of unwanted records sitting around in op-shops.

"There's a run of 200, so it's first in, first served. It's really exciting, if Holiday Records manage to keep it going it's really, really good because it just makes it so much easier," adds Grant Ramsay, guitarist and another of the group's songwriters (as a band they're sort of like a collective, with multiple songwriters and instrument swapping.)

The album was recorded in Room 216 of the historic King Edward Court which, in a previous life was a technical college and is now used by hundreds of community groups for everything from yoga to karate. The woodiness and high ceiling, combined with Forbes Williams' engineering, all add up to a thick and dense wash of sound, which is perfectly suited to the vinyl medium.

"It comes down to a feeling," explains Grant. "It's definitely what we're feeling in the moment, so there's a lot of improvisation, like call and response bits going on.

"And when you're playing in a group in a circle like that there's a lot of harmonics that build up, and then you get a certain vibration going on, and then you're just working with the acoustics of the room and the sound itself. And then the songs kind of ride over the top of that."

That feeling definitely resonates with audiences, too. Tiny Pieces of Eight is one of those rare bands that span different "scenes", rather than just attracting fans of a particular genre. People are attracted to their vibe and engaging live performances.

"It's been lovely the way the audiences have responded to it because you don't know when you put the stuff out there. You never know how people will respond or if it'll make a connection or not, and we've had some great crowds who've come along.

"Dunedin's great like that; it's a creative community where I think you can take quite a lot of risk and stuff and not care too much about it, and also people are going to not let you take yourself too seriously, which I think is great."