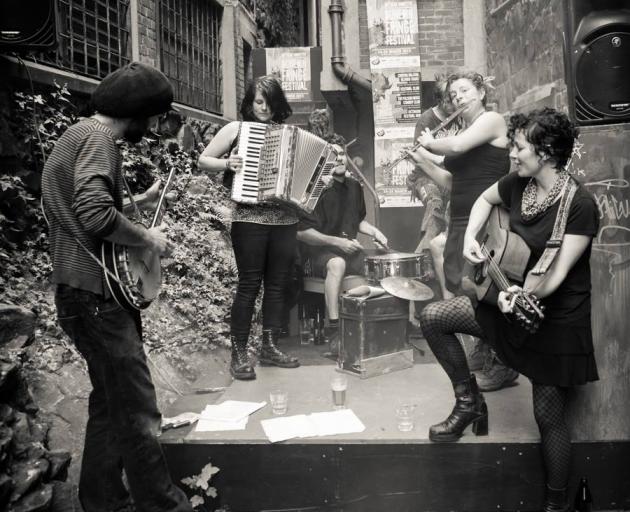 Whiskey and the Wench play Inch Bar on Thursday night. Photo: Supplied
Whiskey and the Wench is widely regarded as Dunedin's loudest folk-punk band, with around a decade's worth of blistering (sometimes literally) live jams behind them. On Thursday, it will be adding another to the pile in the form of an album release gig for its long overdue album After ...

I spoke to accordion player and vocalist Ruth Evans ahead of the gig.

Q You've been a band for about a decade and are only just releasing an album. Why did it take so long?

Technically, we have released two albums before ... These albums were just never released on the digital platform. We kept it to the physical copies only. Old-school styles.

That being said, After ... did take a very long time. We recorded that album at Chicks Hotel, on day of Yule [winter solstice] in 2015.

There's a number of factors that slowed it down, but they all come back to the challenges of being in a band with lots of people with busy lives. We're more of a collective than a band, and we wanted the album to show this. The album comes with a zine/song book, and creating that was what really slowed the process.

Q Would you say the band is more about playing live?

Well, I'd say we're more about playing music together first. So jamming out, really. We don't call them "practices". They are, have always been, and will always be, "jams". Then playing live comes second to that. That's where we get to share those moments with the rest of our community.

Q How do the songs happen? With so many band members how do you all end up playing the same thing?

We play a lot of covers, and traditionals. In these cases someone brings a song to the crew and we play it together. If they stick, they often change, taking on the "Wench" flavour. We're all about that folk tradition of sharing and adapting songs by others. As for the originals, it really depends.

Some are written by an individual member alone, and shared with the crew. Sometimes half-songs will be brought to the crew and they are completed as a group. Then some songs, like Old Friend of Mine for instance, manifest in the jams. Someone will start singing, others will join in. There's no fixed way that we do things.

As for how we manage to all play the same thing? That's not how it always goes. Ha ha ha ha. I can be a bit of a pain in the arse and get excited about a new song and want to play it real badly at a show, when others have maybe never even heard it before. Luckily, I play music with a talented bunch, and they always keep up.

Q How would you describe your collective beliefs or politics as a band?

We are very political, as a band and as people, but then, who's not? Politics is a huge part of our lyrical content.

While I can't summarise our political ideologies into one easy category, I would say that we are all leftist. And I mean LEFTIST, not liberal. A few of us identify as anarchists. But others cringe at the concept of labels being imposed on us in any way. Ha ha ha, it's like they don't realise they're anarchists. But yeah, politics is a big part of what Whiskey and the Wench is all about. Hard-line, anti-capitalist, anti-racist, anti-sexist, leftists. Anti-fascist, too. Needs to be said these days, eh.

Q Have any thoughts on the local body elections?

While I'm personally of the opinion that electoral politics is insufficient, I do think that Aaron Hawkins' win for mayor - the first ever Green Party mayor in the country - that could be a very good thing for Dunedin and the New Zealand left.

Q Cool, so what should people expect from the gig at Inch Bar? And who should come?

Everyone! Ha ha ha. What should people expect? Lots of music, lots of booze and then even more music. We can jam for hours.