Guy Masterson as Shylock. Photo: Christine O'Connor
Shylock
Fortune Theatre
October 9
Reviewed by Helen Watson White
The Shylock of Shakespeare's Merchant of Venice, famous in stage history, is only one among 19 named characters, appearing in only five scenes. 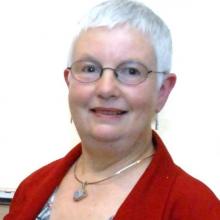 Helen Watson White
Listed simply as "a Jew'', he is, however, anything but simple: sometimes jocular, at other times savage and ruthless; miserly and domineering with a daughter whom he's supposed to love; good at commerce, debating, usury - making money out of lending money - yet doggedly suspicious of his enemies, even when doing business with them.

He has, in fact, few trusted colleagues. That's why the one named next to him in the play's character-list is important: Tubal he's called, described as "a Jew, his friend''.

Guy Masterson has taken up the cause of these two characters, the only Jews in Shakespeare, and used them to create a semi-documentary, semi-theatrical exploration of the western world's treatment of Jews. It is a unique presentation, enthralling in depth and variety.

Somehow, in a thoroughly entertaining medium, he communicates an appreciation of Shakespeare's complex play, the riches of Jewish humour and wit, and the grisly history of persecution Jews have suffered for centuries.

In the person of Tubal he presents the history of the underdog in the story of a bit-part player who, like all actors, was unemployed when Cromwell closed the theatres in the 17th century.

Some little-known episodes from history are put under the spotlight, in a series of mini-tragedies; but the main thread of the writing follows the theme of Shylock's humanity (undoubtedly present in Shakespeare's text), set against the horribly normal antisemitism of the privileged.

We learn that the tale of the "pound of flesh'' exacted on the forfeiture of a contract was found in folklore; Masterson has produced a rich re-vision of that well-known story.