What we get instead 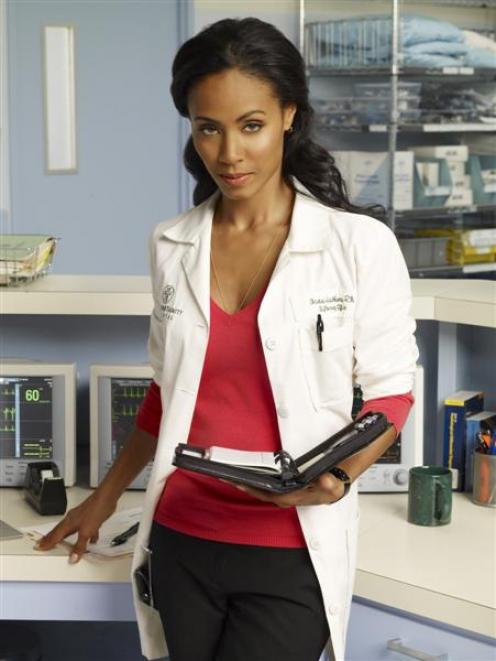 Jada Pinkett Smith stars as Christina Hawthorne, a recently widowed head nurse, in HawthoRNe.
You would think that into a vacuum, greatness would rush.

At a time when so many ground-breaking shows - ER, The Shield, Battlestar Galactica, Boston Legal - have triumphantly concluded, you would imagine networks killing themselves to come up with the next innovation.

Instead we get HawthoRNe.

Balancing her grief, her rebellious teenage daughter and, of course, her bottomless capacity to care, Christina constantly battles with doctors who don't respect her, patients who desperately need her and the crazy pace of a city hospital.

Following fast on the heels of Nurse Jackie, HawthoRNe covers some of the same themes but in a strangely unapologetically risk-free manner.

With a sensibility neither Housian (Pinkett Smith is no comedian, sardonic or otherwise) nor Greysian (there's some early dating among the staff, but no action in the supply closet), writer and producer John Masius seems to think ground-breaking is overrated.

Except for Pinkett Smith being a black woman, two descriptors still rare in a lead character, HawthoRNe nestles cozily right smack in the middle of either the box or the envelope, depending on your cliche preference.

Now this may have been a conscious decision, a form of firmly placid protest of the current frenzied and often gratuitous emphasis put on pace-shifting and quirkiness.

But "character-driven" shouldn't mean boring, and the front-loading of righteous pro-nurse speechifying by Christina doesn't do HawthoRNe any favours; when a show makes Saving Grace seem subtle in terms of delivery, you know you're in trouble.

Pinkett Smith does her best to quickly establish Christina as a sad, tough, competent rule-breaker with the obligatory broken heart of gold.

In the way of medical dramas, Christina performs duties normally left to surgeons and social services, none of whom are up to her standards.

There are the odd moments and overarching familial tensions, but in the first few episodes these don't seem to add up to much.

Maybe it's that the tough and pretty rule-breaker needs something fresher than widowhood to hold our attention.

Maybe the patients are too by-the-book - Cloris Leachman is wasted as a crabby old lady who requires a lecture on respecting nurses.

Maybe it's because the blond nurse is named Candy (Christina Moore) and offers "special services" to injured soldiers (yes, that was the sound of me screaming).

Or maybe it's that the one male nurse (David Julian Hirsh) is assumed to be gay. (Me screaming, again.)Whatever the reason, I found myself thinking less about the characters - oh, Christina's so pretty, but she's so sad and tough, and her daughter's a royal pain, but then, you know, she just lost her father - than I did about the enormous amount of work that goes into making a television show. Everyone working so hard, everyone talented and professional and doing their very best to make this a terrific television show, and it just isn't.