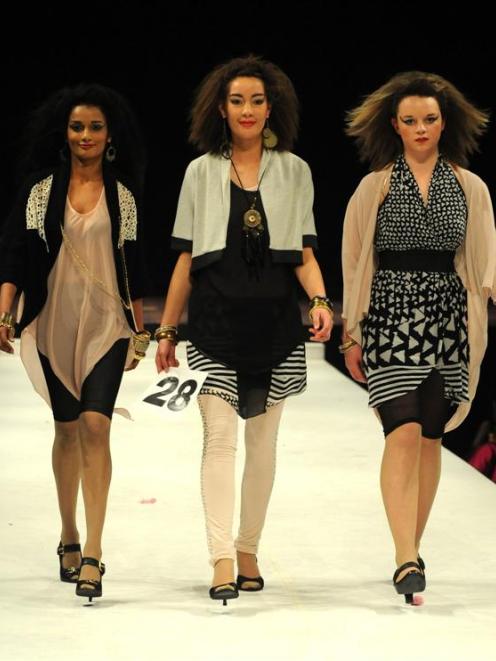 The house was full, and the mellow mood complemented by the lighting and music, as models strode the runway to present the 190 outfits selected for the finals of this year's Hokonui Fashion Design Awards in Gore.

Southlanders know how to celebrate and on Saturday night a crowd of 700 at the Gore Town and Country Club found every reason to do just that.

This was the 22nd year of the show, which began in Gore as a modest local event in 1988.

Only one year was missed.

Today it's a national fashion happening - and the most longstanding of its kind in the country - encouraging designers to put their work forward to be judged by a select group of fashion design industry leaders.

And this year the judges formed quite a force.

Heading the panel was Denise L'Estrange Corbet, co-founder of the heady World brand.

With her were Anjali Stewart, who with Rachel Easting is behind the directional twenty-seven names label, and Theresa Brady, general manager and designer for the fashion house Urban Creative and its high-flying Doosh, Sable and Minx labels.

It was Theresa's second year and another exciting Auckland designer, Adrian Hailwood, was also back for a second time.

From the home province was Invercargill award-winning designer Emily Kerse, who has established an online self-titled brand.

Their brief was simple.

To select winners and runners-up in the eight categories made up of 190 finalists gleaned from the total of 280 entries.

There were, they said, the stand-outs that made for unanimous decisions and, as Ms L'Estrange Corbet pointed out to the audience, "a garment is judged by viewing it up close rather than on the catwalk".

The crowd was treated to a marvellous mix.

The Howl At The Moon streetwear section had everything from pert fine-knit dresses to flirty skirts, shorts and hoodies.

There were ruffles and lace and a little bit of Goth, while accessories included chunky hand-knits, fake fur and plastic hoods.

Wool's famed versatility was borne out by the Southern Institute of Technology's wool section.

There were the inevitable feathers, flax, wool and cartoon images for the Hokonui Heritage Kiwiana section, while the fabulous Doosh Collections Award provided the spectacular visual impact of a series of three outfits coming down the runway as a combo.

Boundaries were pushed to bring a mix of fun, funk and beauty to the VnC Cocktails Avante-garde section, while the heartland Hotel Nightlife awards attracted the romantic, glamorous and pretty.

Although a smaller section, the Fredricks Menswear award packed a punch.

There was also cool sophistication and Euro flair.

Saturday's show and after-party marked the end of another awards year for the convener Heather Paterson, her committee and dedicated volunteers.

It was a year that had seen entry numbers remain high despite the economic climate and a further step up in the design calibre.

It had also attracted entries from Sydney and India.

And, before the show's end the intrepid Mrs Paterson was already announcing plans to further develop the awards next year.

"This is an event that encourages creativity here and overseas.

And all going well, from next year it will include a national secondary school competition that will run in conjunction with the main Hokonui Fashion Design Awards," she said.