In this country, whitebaiting is a time-honoured tradition laced with unspoken rules and rituals, with stands often handed down from generation to generation.

Everyone seems to have their own preference as to where to fish, how to go about it and which area the best bait comes from.

Catches vary every year and from coast to coast, so the only thing that's certain is you never can tell when the whitebait is about to run.

Luck is fickle and tales of success and failure abound but still every year the faithful return to dusty cribs to renew old friendships and try their hand once more for the shimmering prize.

In recent years, pressures on the resource have been voiced, concerns we all should share. As such, whitebait is all the more special and should be treated with respect.

For many of us it is the gift from a generous distant relative or friend. A thing of beauty to be savoured, and rightly so.

Method
Heat the oil in a large pot over a moderate heat until it reaches 170degC. Test temperature using a heat-proof thermometer.

Finely slice or shave red onion and fennel into a bowl. Add herbs, mix to combine and set aside.

Toss whitebait in flour and sift off as much excess flour as possible.

Carefully place whitebait in the hot oil and cook for two minutes or until lightly coloured and slightly crisp before carefully removing with a slotted spoon and draining on absorbent kitchen towels.

Season to taste and serve immediately with the salad, aioli, lemon and ciabatta on the side. 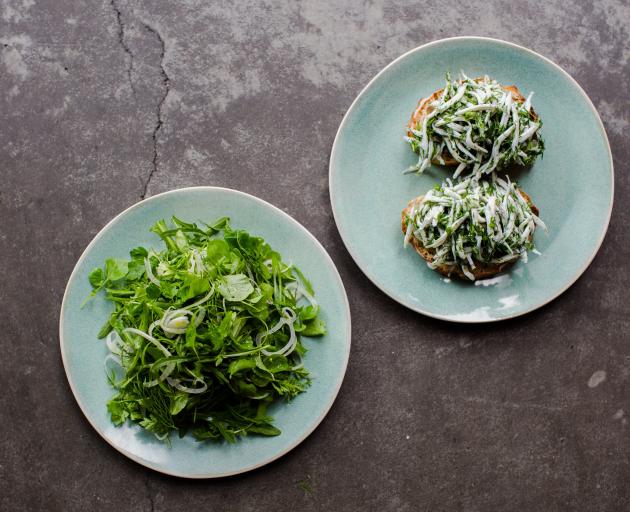 Method
Toast ciabatta and place two slices on each plate.

Finely chop half the parsley and fennel tips.

Finely slice or shave the onion and fennel bulb into a bowl and add the remaining herbs.

Toss salad ingredients to combine and set aside.

Warm the olive oil in a frying pan over a moderate heat and cook the garlic for 10-15 seconds, without colouring, before adding the whitebait and a generous couple of pinches of salt and pepper.

Reduce the heat slightly and gently shake the pan to move the whitebait around until they are just cooked.

Remove from the heat, add chopped herbs and lemon juice and stir gently to combine.

Spoon whitebait over the ciabatta and serve immediately with the salad on the side.

Whisk the egg briefly in a bowl before adding whitebait and seasoning to taste.

Melt butter in several small frypans over a medium heat. Spoon whitebait and egg mix into the pans and cook briefly until the egg begins to set at the edges.

Transfer the pans to the oven and continue to cook until just set.

Remove from the oven and serve immediately with plenty of toast, butter, lemon and some watercress if you feel the urge.