Pupils see from Garden to Table 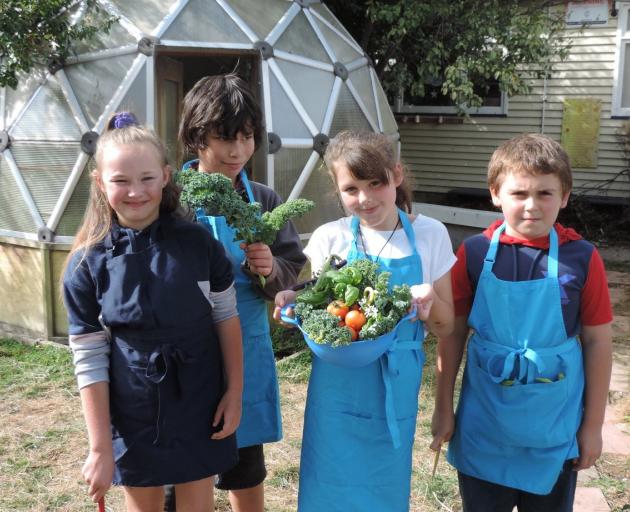 Proudly displaying produce harvested from the school garden for their Garden to Table session are (from left) Chloe Freeman (9), Tano Parker (9), Tayla Cornish (9) and Jacob Balloch (9). Photos: Charmian Smith
The Garden to Table trust believes every child in New Zealand needs to have the skills to grow, cook and enjoy fresh fruit and vegetables. Charmian Smith learns how they are doing it.

''We've learnt that cucumbers grow on plants!'' exclaimed Ann Ruxton as she came out of Carisbrook School's greenhouse during one of their Garden to Table sessions.

The 9-year old girl who had just seen a cucumber growing, explained: ''I never knew that. I always thought that they like kind of make them somehow, not that they grow them.''

Some of the year 5 children were collecting vegetables from the school garden. Rachel Gibb, who looks after the garden, was pointing out white butterflies hovering around the brassicas and aphid eggs on the underside of leaves.

''Do you know what this vegetable is?'' she asked, holding up some silver beet leaves. 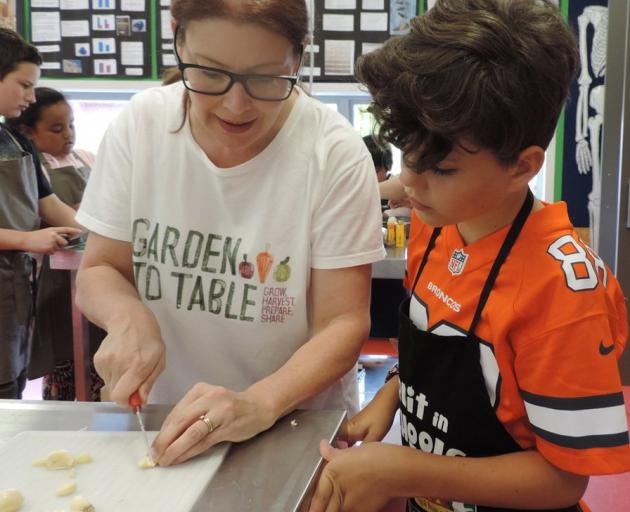 This is only the third Garden to Table session for these children and Linda Taylor, the trust's executive officer who is now based in Dunedin, says it's common for children not to know much about vegetables but after a year of the programme, their knowledge, skills and tastes will be greatly expanded.

In the kitchen, Ms Ruxton is getting a child to read the recipe for apple crumble and a reluctant boy looks as if he's actually enjoying rubbing butter into flour. If they have apples they can do this at home, she tells him.

At another table, under the watchful eye of a volunteer, a girl is stirring vegetables cooking in a pan and some children are breaking eggs from the school's chickens into a bowl for the mixed vegetable crustless quiche.

Nearby, Ashleigh McClenaghan, the class teacher, is talking about halves and quarters to a girl cutting up a tomato for a salad.

Another child is surprised and intrigued by the smell of fresh basil he is chopping. 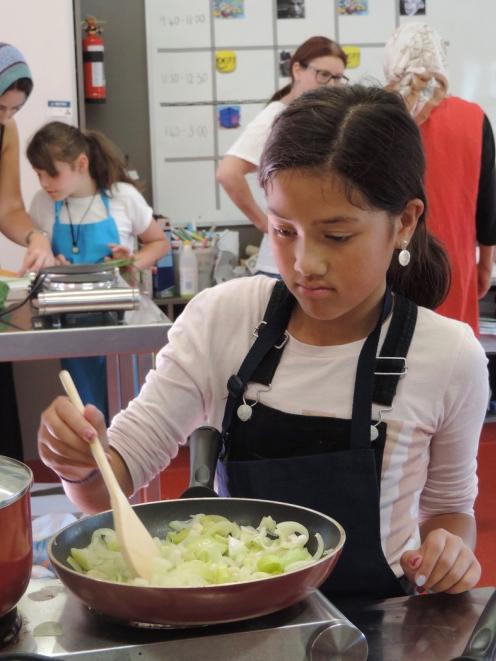 Erena Piho (9) stirs vegetables for the vegetable quiche.
''[Garden to Table] is maths, reading, science, literally covering the whole of the curriculum in an hour and-half session,'' Miss McClenaghan says.

''Because it's practical, reluctant learners take it in here and take it back into the classroom. It's amazing. And it's skills they need to learn.''

The programme was started in New Zealand a decade ago by Auckland food professional Catherine Bell who based it initially on Stephanie Alexander's Australian programme. Now it's run by the Garden to Table Trust and has a local focus, according to Taylor.

''We strongly believe every child in New Zealand needs to have the skills to grow, cook and enjoy fresh fruits and veggies, irrespective of how well off their parents are or what area they live in. Children in higher decile schools are just as likely to be eating takeaways, just a different style of takeaway,'' she says.

Every week or fortnight an entire class spends 90 minutes on the programme. For the first hour, half work in the garden and half cook produce from the garden, then for the last half hour they share the food they've cooked.

''This is a really important part of the programme because for us it's all about getting kids to eat more fresh fruits and vegetables by choice and we know that if they've grown it themselves and cooked it themselves, and sit down with positive peer pressure from their mates, then they are more likely to try it,'' she said.

It was also important to include the whole class, as those who would benefit the most weren't necessarily the ones who would opt in, she said.

''It really helps those kids who don't thrive in a normal classroom environment because it is education outside the classroom, real world learning, hands on. That's part of the reason our ambassador, Al Brown the chef, got involved, because he is dyslexic and had to repeat fifth form at school and was made to feel like the dumb kid. He was hooked when he went to a school and saw slightly naughty boys who usually cause trouble really get stuck into Garden to Table. They calmed down, modified their behaviour, and they were learning and building self-esteem as well.''

Brown has made videos demonstrating knife skills, one of the important things taught in this programme. When children have acquired the five knife skills they receive a knife licence. There is also a wheelbarrow licence for those who learn to steer a full wheelbarrow.

So far 175 schools around the country (9% of all the primary schools) are running the programme and there's a waiting list of schools who want to join, Taylor says.

''Our main barrier to that is having enough staff to support schools to implement the programme in a way that is sustainable,'' she explained.

The trust employs 14 part timers (6.7 FTE) who source funding and partners for both the trust and schools, develop learning resources and support the schools.

''Our main challenge is funding. It costs around $3000 a year to support a school - that's not what a school pays, it's what it costs us as a trust,'' she says.

The trust is funded by grants from gaming trusts and lotteries, and schools make a financial contribution towards the programme, although the trust usually manages to find a funder for lower-decile schools. Ode in Wanaka funded Carisbrook into the programme.

The trust also puts schools in touch with corporate partners that support in kind or financially, and sources of volunteers, such as retirement villages and student volunteers from Otago Polytechnic and University.

''It's hands-on, active doing by the children. The volunteers are there generally for safety, just making sure that if you have five children standing round with chopping boards and knives they are using the correct technique or that if children are digging in the garden with spades they're wearing shoes or gumboots.''

Kitchen and garden specialists are needed to take responsibility for the menus to be cooked and for the garden and to lead the sessions. They may be employed by the school or be passionate volunteers.

''We do it that way so the classroom teacher can float around the sessions and pull out learning outcomes she sees. It's really important to us that Garden to Table is not just something that is an add-on. Anything that is done in schools today has to benefit the core curriculum,'' Taylor says.

Even if a school has no kitchen or garden it can start the programme.

Children can bring old gumboots or buckets which they decorate and are given seeds donated by Kings Seeds and soil by Tui Garden Products, and the children grow peas in the classroom, she says.

''A lot of what we do is connecting corporate volunteering with schools so you may have a working bee where we can help you build some raised gardens.''

There are no-cook recipes, but most can be made on a couple of trestle tables in the school hall and a plug-in frying pan. Most staff rooms have an oven if it's needed.

''You work with what you've got. For us it's about being resilient and self sustaining,'' she said.

''One of our [funding] challenges is that we're a top-of-the-cliff programme. We are not giving lunches to hungry children, although what we do find for some of our lower-decile schools where we know there are hungry kids, sitting down at Garden to Table is a great way for those kids to get a regular healthy meal with no discrimination, no labelling, because the entire class is sitting and eating together. We know of other programmes where there is embarrassment and stigma for kids. But it is only once a week or once a fortnight. We would love for schools to be able to do it more often but it's a case of resources,'' Taylor says.

Back at Carisbrook, as the kitchen and garden sessions are finishing, the children lay plates and cutlery and flowers to decorate the tables in their classroom. There's excitement as the food is brought in and served to everyone - children, teachers and volunteers. Some children eat everything, others only taste and scrape their leftovers into the compost bucket - they know they have to try at least a thumbnail-sized piece.

One girl says she doesn't like the lemon in the yoghurt and lemon dressing on the salad, but Miss McClenaghan tells her that's the good thing about cooking, if you don't like something you can change it next time you make it.