How to make cheese rolls 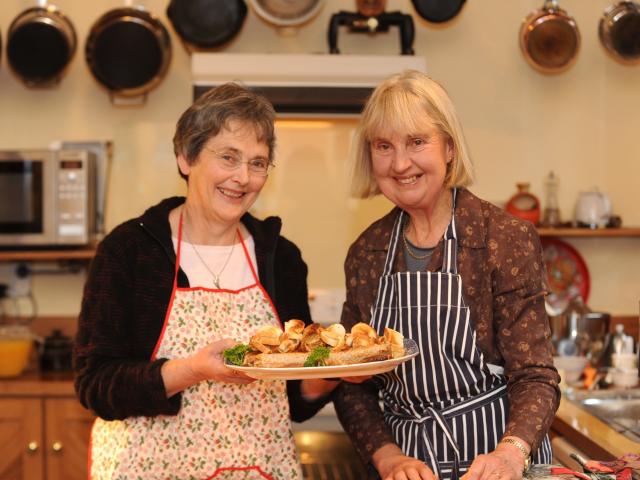 Flavours of home is a series of recipes from around the world cooked by people at home in Otago. This week Helen Leach and Mary Browne, from New Zealand, show us how to make traditional southern cheese rolls.

Cheese rolls became a specialty in the 1950s when sliced bread became available.

Several fillings were used and Prof Leach and Mrs Browne each have their favourite.

Thanks to Afife Harris and Gardens New World.

Research by Prof Leach and Raelene Ingles has shown the earliest known cheese-roll filling was a home-made copy of Rex Cheese, a commercially processed cheese available in tins.

It had been around for years.

This version comes from Bring A Plate Recipes from the Mornington Methodist Church, 1984.

Put all the ingredients in a small, heavy-based saucepan and mix.

Stir continuously over medium heat until the mixture melts, then thickens and just begins to boil.

Remove from heat and allow to cool.

It will thicken as it cools.

Store in small jars in the fridge.

When Mary Browne edited Favourite Recipes from Rural Otago for the Waikouaiti branch of Rural Women in 1994, all the cheese-roll recipes she received originated from McGregors Bakery tearooms in Palmerston, which had been making them for many years.

Use a food processor to chop the onion finely.

Tip into a bowl.

Cut the cheese into small cubes and place in the processor.

Add about cup boiling water and pulse until the cheese is well chopped.

Add extra boiling water, a tablespoon at a time, and process until the mix is soft, smooth and thick.

Mix in the onion.

You can trim the crusts or leave them in place.

Spread the filling evenly over the slices and roll tightly.

Brush with melted butter if desired.

The rolls can be cooked immediately or stored up to a day in the fridge or three months in the freezer.

To make the rolls

To cook the rolls

Preheat oven and pan with a grilling rack to 200degC.

Place the rolls on the hot rack on the pan and position above the middle of the oven.

Grill the rolls until golden brown.

Use tongs to turn rolls over and grill the second side.

Or, toast in an electric grill and sandwich press with an adjusting lid.

Serve hot with the traditional cup of tea or with a hearty soup for lunch.

Spread the filling thickly to the edges of the bread.

Some people like to cut off the crusts but they don't prevent the bread being rolled.

Mrs Browne likes to leave them on.

Roll up the bread, place the seam at the bottom and press to flatten the roll.

Watch the rolls carefully while cooking as they may burn.

Some ovens require you to leave the door ajar when grilling, but others don't.

Rolls may cook at a different speed so remove them as they cook and put the rest back to brown.