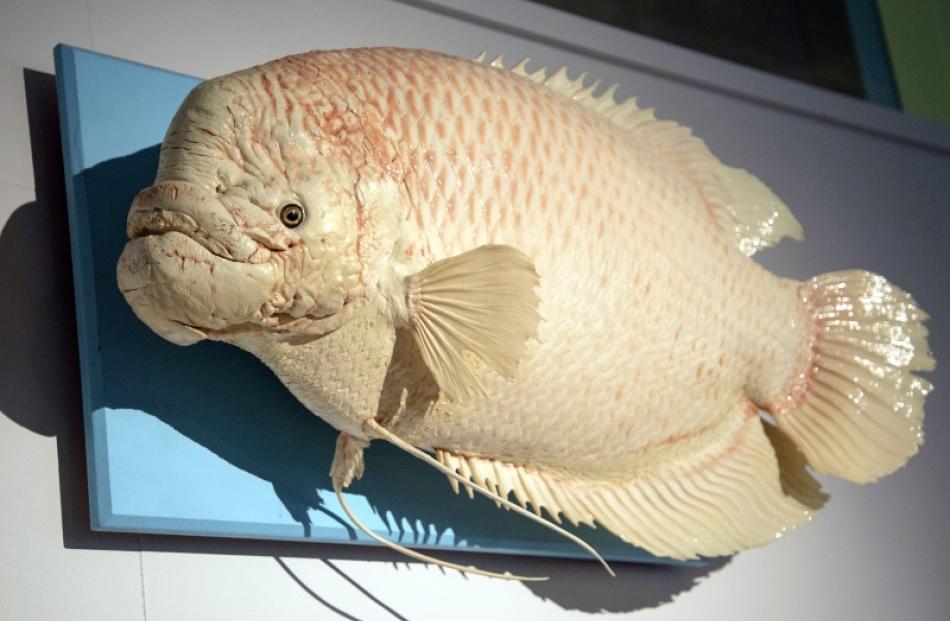 Eric the gourami (1990-2004) grew from a little fish to become a local legend. Photo supplied.

Eric the gourami grew in size and popularity during his 10 years at Otago Museum, as the community fell for this funny-looking fish, hook, line and sinker, writes Ellen Sima.

Before coming to the museum he lived at Pet Towne, in South Dunedin.

The shop closed its doors in 1996 and Eric was given to the museum, where he was housed in the Discovery World foyer.

When he first arrived he was just 3 years old and 20cm in length, but was already tipped for a big future.

John Darby, who was the museum's head of science at the time, predicted Eric would grow half a metre long, and have a big personality to match.

Eric seemed to love his position in the public eye, responding well to the attention of visitors.

Eric was moved to a new, roomier tank as a part of the $18 million museum redevelopment in 2000, which also included updates to the atrium space and stairwells.

A massive community fundraising effort netted $6000 for Eric, covering half the cost of his new home.

The effects of this new, roomier tank didn't take long to show.

In August 2001, The Star published an article commenting on Eric's rapid increase in size, a growth spurt brought on by having more room to grow.

Like many other fish species, gourami will grow to fit the size of their environment, and Eric had his new tank all to himself.

The decision to keep him on his own wasn't just about giving him space.

New fish had been introduced to the tank in the past, but Eric's keepers soon realised that he didn't play well with others.

Eric's varied and opportunistic diet mirrored what giant gourami eat in the wild.

Native to Indonesia, they are known as ''water hogs'', and cruise through vegetated rivers and canals in search of algae, decaying plant matter, insects or bits of dead animal.

It is only as they become adults that they develop the big, fleshy lips and swollen foreheads that gave Eric his distinctive look.

A veterinarian was called, and medicine administered, but there was nothing to be done.

In honour of Eric and his 10 years at Otago Museum, staff ate bananas (his favourite food) at morning tea.

A tribute board was set up near his empty tank in the days following his death.

More than 70 paper fish were made and decorated by members of the public who had come to pay their respects and farewell a treasured member of the museum team.

This was not to be the end of Eric.

His body was sent to O'Rourke Brothers Taxidermists, where his skin was mounted for display.

Today, you can find him in the Search Centre, just metres from where he first lived at the museum.

Still looking out at visitors with his goggle eye, and still a Dunedin icon, Eric swims on.