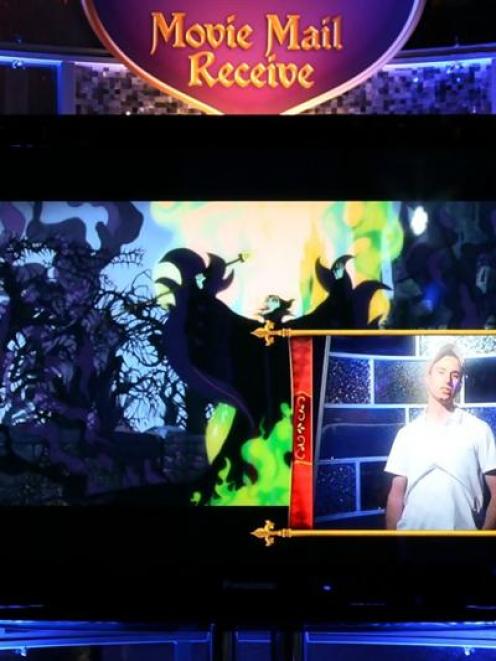 The Movie Mail feature allows you to send video messages embedded in scenes from the film to anyone who also owns the same Blu-ray title. Photo from www.blu-ray.com.
Pop in a new Blu-ray version of the animated flick Sleeping Beauty, and you (or your kids) will be able to connect online while watching the movie to text-chat with friends or other Disney fans.

Or you could pick your favourite scene and send it with a personalised video message to family members who also own the disc.

With another new, web-connected feature, the movie's interface will reflect the real-world weather outside your living room: If it's raining in your hometown, it'll also be raining on the castle in the title's menu screen.

Such are the latest internet-enabled bells and whistles to try to drum up consumer interest in the format that aims to make the DVD extinct.

Blu-ray won a high-definition video format war, though you wouldn't necessarily know it, yet.

According to market tracker Nielsen VideoScan, Blu-ray disc sales account for about 4% of the market for movie disc sales - that's relatively unchanged from earlier this year.

"It's not in decline, but it's not growing very fast," said Erin Crawford, general manager at the research firm.

Disney executives who showed off the new features on the Sleeping Beauty disc said the company was trying to turn watching its movies into an active experience, to better reflect how today's children tend to connect.

Other studios are dipping their toes in as well, with their own web-powered features.

In the Blu-ray release of the recent X Files movie, users will be able to create their own "special agent" avatars to explore some online content for the film, available only to Blu-ray users.

Home theatre buffs maintain that there will always be a market for physical media like Blu-ray discs, but there's no denying that consumers are seeing more options, designed to woo them away from the silver disc.

A wave of services and products designed to deliver video content to users via the web have emerged.

Recently, NBC.com announced that 25 million people had visited its website to watch new episodes of network shows like Heroes or The Office - a record for the site.

Meanwhile, Hulu.com, a US video site stocked with thousands of hours worth of commercial-sponsored movie and TV content, has hit 100 million streams a month.

But the gadget-loving or home theatre enthusiast set might start reaching into their pockets for online video offerings, with some new offerings that are in the works.

Under a recent deal with online movie rental service Netflix, Microsoft will soon be making thousands of movies in the Netflix collection available to owners of the Xbox 360 console.

My tech-snob friend Jon recently borrowed my Blu-ray player - the one that comes built into the PlayStation 3.

He was hoping the experience would help him justify the purchase of a Blu-ray player or PS3, but that plan didn't work out.

As he switched between a Blu-ray and DVD copy of the latest release of Blade Runner, he was disappointed to find that the image delivered by Blu-ray wasn't much better than the image delivered by his "upconverting" DVD player, which is designed to simulate a high-definition picture with the use of some special software.

"It's very easy for me to justify spending a lot of money for the sake of improvements in audio and video, but I was hard-pressed to see a difference," he said. "It pains me to say that."

"But they're not getting the movies out as quick as they need to be."