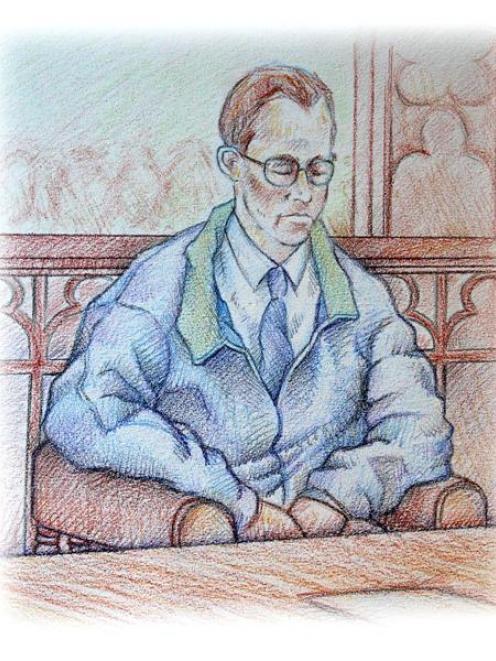 From the 1995 Bain trial. Drawing by Dave Burke.
One of the most fascinating aspects of the David Bain murder retrial was the contrast in court coverage from the original trial, 14 years ago.

Even Lady Justice, with her blindfold, would have noticed the differences between the separate Bain murder trials in 1995 and 2009.

In the first trial, photography was banned in court and media relied on artist impressions of the unfolding drama.

By 2009, in-court video and still cameras were normal and each day of the trial saw graphic images in the Otago Daily Times and on TV.

It was a very different story when Dunedin artist James Paton covered the 1995 trial as an accredited court artist.

Paton was the senior graphics designer for Television New Zealand in Dowling St from 1962 till 1991, providing cartoon drawings and graphics for Dunedin-produced programmes such as Of Course You Can Do It.

"It was quite nerve-racking in that it was such a high-profile case and it was something I'd never done before," he recalls.

"So, I didn't feel as confident as I usually do, because it was such a foreign situation. There was a lot of pressure, too.

It's very public and everyone can tell at a glance who the people are and if you don't get that likeness, you've botched it," he says, smiling.

"One of the hardest things, for me, though, was that I don't really like people looking over my shoulder when I'm working.

But the trial was quite boring at times, so a lot of people were watching me drawing, rather than what was happening in the court.

"I just tried to shut off and go for it."

The original three-week trial took place at the Dunedin High Court in May, 1995.

The retrial, of course, found him not guilty.

Paton did his works using spirit marker pens and Indian ink, before completing the detail work in coloured pencil and watercolour after the court sessions.

"I did a linear version of them first in pen or pencil and, when I was certain I had achieved the right look and got the person, I'd go back to the studio and fill them in.

"I also took notes of what colours people were wearing. I was quite relieved when David Bain turned up and he wasn't wearing one of those complicated multi-coloured jumpers he insisted on wearing.

"I'd do the modelling work later on, with coloured pencil, to add shadow and dimension to the face.

Otherwise, the face would be a little flat.

"You're trying to capture people's mannerisms, rather than just depict what they look like," he says.

"All the time you're trying to empathise with him; trying to imagine what he's thinking.

I remember David Bain looked ponderous and the way his hands would move about.

"The lawyers were also a challenge, as they take on a totally different persona when they're wearing that wig.

"But, the most difficult part is trying to capture someone that's moving all the time.

"You have to take a summary of what people look like. You're really trying to capture their facial expressions when they're being asked questions. You try to encapsulate that. You want it to look like them, but more than that you're trying to capture a look," Mr Paton says.

"[Peanuts creator] Charles Schulz used to spend up to half an hour deciding where to put the smile on Linus' face.

He always said if it was in the wrong place it didn't capture the mood he wanted to convey."

Mr Paton says he had no firm views on the case, but he does have a view on the changing face of justice.

"I really like the drawings. There's a charm in them that belongs to a bygone era," he says.

"They're held in time and space and I think society loses something when you lose these things.

"We rubbish conventions and throw them out when we think they've served us, but we throw them away too soon. And that applies to so many aspects of life."

Dunedin artist Dave Burke was in court every day of the original three-week trial for the Otago Daily Times.

"To be honest, I was extremely nervous about it. It was a tough job, because it was important and you had to get it right," he says.

"There were no cameras allowed in court at all back then.

"I was nervous about doing my best, too, because I knew a lot of people would be scrutinising it.

"I remember going over there on the first day with [former ODT editor] Robin Charteris and moving around the court trying to get the different aspects.

"I spent most of the first morning just drawing the courtroom. Then, in the afternoon, David came in briefly with two prison guards to make his plea. He stood there between the two guards, gave his plea and they left.

"He was in and out in moments and it would have been very difficult to capture that scene in such a short amount of time. So, going in and doing the drawing of the courtroom first was essential. It meant, when he came in, I could concentrate on him.

"After the first day, the thing I remember most was him just sitting there, with his back hard up against the back of the chair and his head down and his hands on the table in front of him.

"I remember David just sitting there very, very, very still. He was quite emotionless in court.

"I spent most of the time trying to capture David and his movements. One day, he was quite distraught and his head was down. It was hard to capture that. It's very hard, when you're drawing, to capture something that captures the moment.

"I found it tough having to sit through a lot of the evidence. You had to remove yourself from it. I'd never been involved in a murder trial or anything like it before. It was a very intense time and I was a bit spooked by it all.

"It was an emotional experience. A lot of the evidence really rattled me. I struggled with it for a bit afterwards, to be honest."

However, Mr Burke believes court reportage has come of age with the introduction of cameras.

"It was very hard for me to capture the mood at times with a drawn picture, because of deadline pressures. This meant compromise . . . and I think it's definitely a progression using cameras.

"It's just the right thing to do. You can capture the mood better now with cameras.

"I do a lot of photography these days and I've learnt that photography is all about timing. People's emotions and things are changing all the time and you can react better with a camera.

"If you are prepared to wait, the right moment will present itself and you will be left with an image that captures what it's all about."

Perhaps the best person to comment on the changes is veteran Otago Daily Times court reporter Kay Sinclair, who covered both the 1995 and 2009 trials for this newspaper.

"It's great having photographs. I think it makes a huge difference. And television coverage introduces such immediacy," she says.

"Some of the old drawings were very, very good, but I think photographs capture the moment better. It's really interesting seeing the expression on someone's face, whether it's a witness or the accused."

However, Ms Sinclair had some reservations about other aspects of the retrial.

"There were a lot of media at the first trial, but this one has been a media circus. There are just so many of us [journalists].

"I can't help wondering if the process of hearing a murder trial isn't getting a bit lost in the media hype.

"But the public are certainly being kept very well informed."

Court in the act

One of the biggest differences between the two Bain murder trials is how the internet has revolutionised newspaper coverage of modern court cases.

The Otago Daily Times website was updated regularly each day - at times every 15 minutes - during the three-month retrial.

"Where, in the past, newspapers had one deadline and filed one story, they can now go head-to-head with radio and television by publishing stories throughout the day," Mr Flaherty says.

"We had already been updating odt.co.nz with breaking news from court, such as the Michael Swann decision, but the Bain trial has been a whole new ballgame.

"During the retrial experienced ODT court reporter Kay Sinclair routinely filed updates for odt.co.nz in the morning and afternoon, in addition to filing the main detailed court report for the ODT print editions," he says.

During the closing arguments and summing up, the coverage went up a notch, with reporter Debbie Porteous filing updates every 15 minutes.

"Her reports meant the story was constantly changing and odt.co.nz readers could keep up with every step of the closing arguments of both the Crown and the defence, and the judge's detailed five-hour summing up.

"By the end of Thursday it felt like we had actually been in the courtroom listening to the judge," Mr Flaherty says.

"And the demand is there. The expectation of regular updates from the Bain trial brings readers flocking to the website.

"The judge's summing up generated more than 10,000 page-views and many of these were returning visitors - meaning readers were checking back regularly for the latest update."