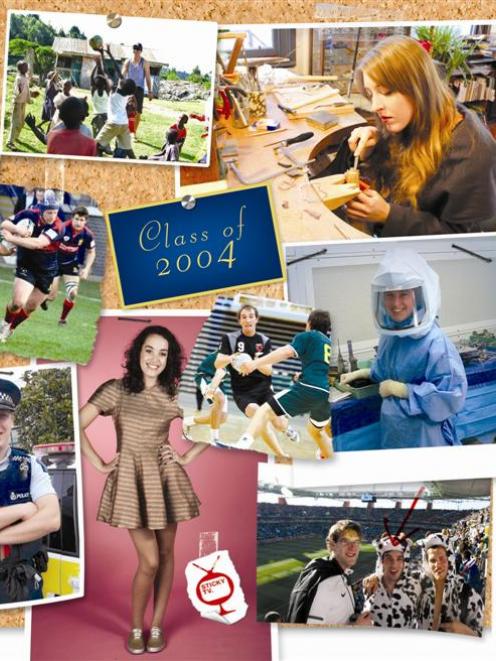 More than a quarter of the people who received Otago Daily Times awards for high-school excellence in 2004 are now overseas and a similar number intend to follow in the next few years.

Many plan an eventual return for reasons to do with family and lifestyle but see little incentive to stay at this stage of their careers.

Prime Minister John Key has made no secret of the fact he wants to stem the number of skilled New Zealanders heading overseas, especially to Australia where job opportunities and salaries are significantly better.

And that disparity was mentioned by several of the 56 people, now aged in their mid-20s, who received Class Act awards.

Jenny Stein, an exploration geologist working in Tasmania, says not only are wages there better but the exchange rate works in her favour when sending money home. The higher income radiographer Alice Eason is earning will help her buy her own home when she returns and theatre nurse Aimee Ross earns $500 more in the hand per fortnight than she would in New Zealand.

"The only incentive that I can see that the Government provides me to stay is an interest-free student loan. I'll come back eventually but with the salary gap between New Zealand and places like Australia and the UK, I'm not in a big hurry."

Andrew Haines, who is doing a PhD in physics at the University of Cambridge, says New Zealand has a significant advantage in that it is a great place to live and to raise a family. Most Kiwis he knows in the UK want to return home one day: "However, the pay disparity is particularly compelling early in one's career, when those quality-of-life considerations are perhaps less of a factor, and to keep its skilled graduates, New Zealand has to do something to close that gap."

Giving bonuses to those staying in New Zealand a certain numbers of years post-graduation or making deductions from their student loans were two suggestions from the group.

Haines says if wages cannot be increased across the board, early career fellowships for top graduates would be a good way to target those whom we particularly want to keep.

Junior doctor Blair York says about 30% of his peers went overseas within a few years of graduating and this is largely unavoidable: "People want to travel and see the world. What needs to be done, however, is for the Government and businesses to keep in touch ... and offer them opportunities on their return. Losing people for one to two years would be a good outcome, when currently we are losing many people who do not return."

For him, the attraction of going overseas is not entirely about money. It is also about getting a wider range of experiences, both professionally and personally.

That point was also made by a commercial pilot who has spent the best part of seven years offshore, albeit working for a New Zealand company. Cole Bennetts says the reason he left was the "adventure" offered by exploring different countries and cultures.

Others have no plans to leave.

Sam Lind, who is completing his PhD in chemistry at Otago, has been to scientific conferences overseas and has no desire to give up the lifestyle he has here. However, he feels the Government needs to continue to develop our high-value technology sector so university graduates have jobs to go to.

And Nicole Stuart, who works in administration, says New Zealand has much to offer, all of it within easy reach. She is one of 17 people in the group still in the Otago-Southland region.

Of those overseas, eight are in Australia, six in the UK and one in Portugal. Another is a former exchange student who returned to her native Germany.

A few said the global financial crisis had changed their travel plans and some had noticed increased competition for jobs and scholarships. But most of those who answered questions about the recession said it had not affected them personally.

Seven of the 56 have paid off their student loans and five have bought houses.

Three are married, four engaged and 11 others are living with partners. One is a parent and another is pregnant.

Four solicitors and three teachers are among the cohort. Twelve people are working in the health sector and a similar number are studying. The scholars include Andrew Haines, who is based in the nanophotonics centre at Cambridge, and Sam Lind, whose research at Otago could help develop cheaper, more efficient solar cells. Meanwhile, Soongwon Cho is following his dreams and in the footsteps of "great scientists" like Alexander Fleming, by studying at London's Imperial College.

Patrice McKenzie plays professional basketball in Australia and is in the New Zealand women's basketball team, the Tall Ferns.

Others are making their mark in the arts.

Rex Cullen won a national award at the recent V48 Hour Film Festival, while Debbie Adamson is creating work for a Sydney exhibition that pairs emerging jewellers with international mentors.

Kanoa Lloyd studied massage therapy but says performing was always her passion so landing a job as presenter on Sticky TV was a dream come true.

Others, asked about the best things to happen to them since school, mentioned being awarded scholarships, travelling, starting careers and meeting their partners.

For lawyer Joseph Lill it was doing volunteer work in Central and South America and climbing more than 6000m to the top of Mt Huayana Potosi in Bolivia.

The biggest hurdle for some has been finding jobs and fitting in other pursuits such as sport and art around full-time work.

Sam Dallimore, who followed the All Whites to South Africa and now manages a bar in England, says finding his destiny is a challenge but living a life of uncertainty brings a life of excitement.

Laura Hughes studied dentistry before switching to architecture and says this year's Class Act recipients should not stick with something if it does not excite them every day.

For those in Christchurch, the February 22 earthquake was one of the most difficult times of their young lives.

Kat Bulk lost almost everything when her inner-city accommodation was severely damaged and she had to evacuate on foot with only her cats and the clothing that she was standing up in. But the "horrific" experience resulted in an opportunity she did not know existed. The graphic designer, who had been struggling to find work, was offered a job out of the city on a dairy farm and loves it.

Blair York had been a doctor at Christchurch Public Hospital for only three months and says the quake was so sudden and violent, it felt like a bomb had gone off. People on his ward were screaming as they tried to clamber under tables; patients arrived outside the emergency department on the roofs of cars and the backs of trucks. For someone with limited time on the job, trying to assess the severity of injuries in two or three minutes was a "pretty crazy experience".

Occupational therapist Courtney May makes sure she always has her cellphone with her. Teacher Erin Smyth lives by a maxim found in the sports bag of a late friend and team-mate who was in the Pyne Gould Corporation building when the earthquake hit.

"The quote, 'The pain of discipline is better than the pain of regret', was found in her hockey bag and is something that now sticks with me."

Not surprisingly, the rebuild of Christchurch was seen as an important issue in the upcoming election, along with economic growth, environmental sustainability and health care.

Others were concerned about student loans and employment for graduates.

Delia Stammers, who was a physiotherapist before taking a nannying job in London, says many people graduate from university keen to get jobs, then realise there aren't many - "particularly in sectors like physiotherapy where the changes to ACC have scared off patients".

Stammers will return to New Zealand permanently in a few years, along with many of her peers who will bring their expertise, wealth and contacts with them. But persuading our best and brightest not to leave in the first place is likely to be a struggle.

Solicitor Polly Higbee says the presence of family and friends is a reason for her to remain, or to not stay away too long, but it is also important that New Zealand has a good economy and a high standard of living.

"Any government will need to continually make improvements in those areas in order to retain skilled young people."