"Where is the proof? Where is the evidence?" asks actor Tom Wilkinson in exasperated tones, as lawyer Richard Rampton, in a pivotal scene in the film Denial.

He and other central characters in the fact-based drama are standing in a Nazi death camp gas chamber in Poland, discussing precisely how they will prove, 50 years after the event, that people were killed here enmasse.

While the script gives those lines to the lawyer, they could equally have been delivered by fellow British actor John Sessions, who plays the part of Prof Richard J. Evans in the film, the man brought in to provide the hard historical research to back up claims that Holocaust denier David Irving had been playing fast and loose with the truth. 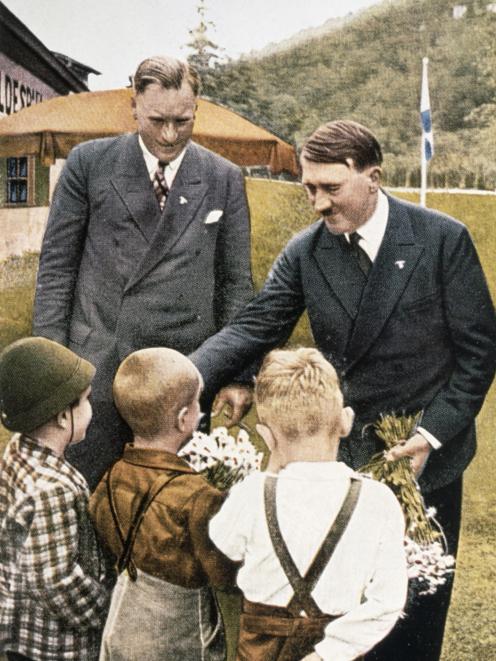 Nazi Party leader Adolf Hitler is handed flowers in a propaganda photograph. Photo: Hulton Archive/Getty Images
Prof Evans will be the centrepiece of two public events at the University of Otago next week. On Thursday, he will deliver the 2017 Michael King Memorial Lecture on "War in the Nazi Imagination". Before that, on Tuesday, there will be a public screening of the 2016 film, Denial, which was based on the libel case brought by controversial British writer David Irving against American historian Deborah Lipstadt in London’s High Court in 2000.

Prof Evans’ role as an expert historical witness propelled him to a level of fame unusual for an academic historian.

The film begins with Irving’s dramatic accusation that Lipstadt had falsely branded him a Holocaust denier and falsifier of historical evidence in her 1993 book, Denying the Holocaust. It then reconstructs the extraordinary preparation for the trial, culminating in a re-creation of the sensational hearing.

At the time, the case was widely recognised as being about much more than the reputations of a couple of historians: it was about truth and the historical record. It raised vital questions about how to distinguish between reliable and false history. Implicit in this was the question of the role of the historian: objective observer of the past or ideologically-driven narrator steered by their own prejudices and biases?

Unlike in America, where there is a presumption of innocence, in British libel trials the burden of proof lies with the accused. Consequently, if they wanted to win the case, Lipstadt and her legal team had to prove that Irving had lied about the Holocaust in his writings. They had to show that what Lipstadt said about Irving in her book was not defamatory, but an accurate and fair assessment of the man and his work. Somewhat absurdly, Lipstadt’s team had to prove that the Holocaust took place.

They knew that to pull this off would require historical expertise. Among the expert witnesses they called on was one of Britain’s most prominent historians, Richard J. Evans. With his focus on 19th and 20th century German history, Prof Evans was well matched with the case. He was no stranger to public controversy either, having written about the Historikerstreit (German for "historian’s quarrel"): a public controversy among academics in the 1980s about how the Nazi past and Holocaust should best be remembered and understood in modern German society. Prof Evans argued that the attempt to downplay the events of the Holocaust amounted to a whitewashing of Germany’s past.

At the time, Prof Evans had also just finished a book that dealt with many of the questions raised during the ensuing trial. In Defence of History (1997) argued for the continued relevance and value of the historian’s craft. Despite rising scepticism about the objectivity of the historian, Prof Evans maintained that objective and accurate historical analysis is possible.

Lipstadt’s defence team employed Prof Evans to sift through Irving’s works on Nazi Germany looking for inaccuracies and manipulations of historical evidence. With the help of two student assistants, Prof Evans spent all of 1998 and much of ’99 producing a 740-page report detailing numerous instances where Irving had distorted evidence, used forged documents, taken quotes out of context, and drawn untenable conclusions.

Part of his job was also to take the witness box during the London High Court trial in January 2000. With Irving representing himself at the trial, Prof Evans found himself in the curious position of being cross-examined by the man whose work he had been dissecting for the previous two years.

Ultimately, Lipstadt was vindicated. Along with the work of witnesses, such as Prof Evans, the defence was able to provide video footage and diary excerpts to demonstrate that Irving’s writings on the Holocaust were inaccurate and driven by a racist, anti-Semitic agenda. Lipstadt’s claims about Irving were therefore declared substantially true, and without libellous intent.

It might have been the end of the road for Irving as a historian, but Prof Evans has continued to forge a distinguished career.

Now Prof Sir Richard J. Evans, he is president of Wolfson College, Cambridge. Between 2008 and 2014, he was the Regius Professor of History at Cambridge, a prestigious position dating back to 1724. An indication of the importance of the position is that Prof Evans’ initial selection by a panel of top-flight academics had to be ratified by the Prime Minister and The Queen.

Although now retired from teaching, Prof Evans continues to write and comment on historical and contemporary topics, his work as a historian remaining relevant to current international events.

The recent rise of authoritarian strongmen around the globe has reignited discussions of the 1930s and ’40s, as people look to the past to understand what it is we’re really seeing here and now. Deliberately divisive rhetoric, the bypassing of democratic procedures and norms, and the curtailment of civil liberties, have been just some of the features of 1930s and ’40s Europe that people have noticed in our current political climate.

The highest-profile example is, of course, in the US, where commentators have drawn comparisons between the rise of Donald Trump and that of Adolf Hitler. The likes of Vladimir Putin, in Russia, and Turkey’s Recep Tayyip Erdogan have come in for similar treatment.

Can we look to Nazi-era Germany and make any meaningful comparisons with current political developments? Prof Evans, having written a trilogy of books on the Third Reich, has been drawn to answer this very question. His answer? Democracy is fragile. This isn’t 1930s Germany, but there are still echoes in the way that figures such as Trump have vilified minorities and undermined independent organs of the state to further their own agenda.

- Tom Rawcliffe is a University of Otago humanities intern at the Otago Daily Times.

Holocaust deniers set out to make millions of unique and individual souls invisible.

They failed, of course.