Her voice against the mines 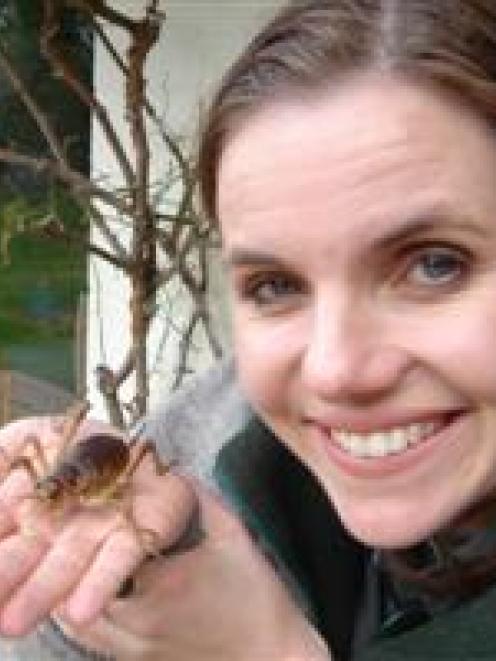 Nicola Vallance and friend. Photos by Andrew Nelson.
Frustration over Government proposals has prompted the face of the Department of Conservation, Nicola Vallance, to pack away her polar fleece and find a new platform for her environmental concerns. Shane Gilchrist reports.

Those who have rubbed shoulders with Nicola Vallance might agree with the suggestion - her own, by the way - that she possesses a "bolshie" streak, a peak-decibel level louder than most, and a passion to protect our wild things and even wilder places.

• Digging in for conservation land battle

Ms Vallance has worked for the Department of Conservation for the past seven years, most recently as its national media adviser. In that role she has served as a high-profile advocate for our environment and the creatures that inhabit it. 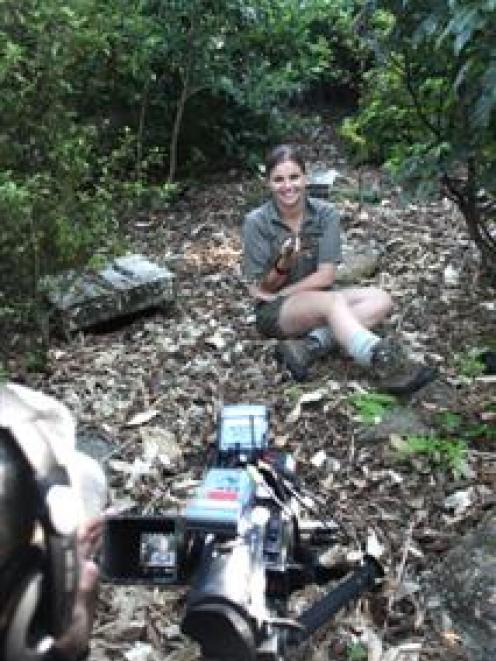 Nicola Vallance during film for her TV show.
She has appeared regularly on TVNZ's Good Morning breakfast show, researched, written and presented more than 200 episodes of the Meet the Locals series for TVNZ 6, written blogs, popped up in a range of interviews, and even escorted Prince William (an avid conservationist, apparently) on a bushwalk in January. She could be described as the "face" of Doc.

Until today, that is.

A current of feeling that once moved a child to bring home cockabullies and caterpillars has been swept to the surface by a feeling of unease, anger even, over the Government's investigation into allowing access to minerals in parts of the conservation estate.

The areas, currently protected under schedule 4 of the Crown Minerals Act because of their ecological and scenic values, include 14 national parks as well as the Coromandel Forest Park.

Nicola Vallance during film for her TV show.
However, the Government plans to release a document at the end of this month which opponents fear may relax access rules. Under the microscope are gold deposits in the Coromandel and minerals such as tungsten, tin and copper in the South Island's Kahurangi and Mt Aspiring national parks.

Yes, there are other reasons why the 32-year-old has packed away Doc's trademark khaki polar fleece and "stubbies" shorts: a job with Forest and Bird provides a fresh challenge as well as the chance to return to her beloved South Island, family and friends. But the schedule 4 discussion document, first mooted late last year by Minister of Energy and Resources Gerry Brownlee, was the "clincher".

Don't get her started? It's more a case of getting her to stop. Still, Ms Vallance would be the first to say she's not shy of a few words.

"In my seven years in Doc, and having had the privilege of travelling to some of our wildest places while filming Meet the Locals, I've seen how much our native wildlife is struggling to survive - and I've also met some of the thousands of volunteers, businesspeople, scientists and families all out getting their hands dirty trying to protect what they know is special.

"To suggest that it's now OK to think about mining in national parks is something I can't go along with. We already have 82 mining permits on public conservation land.

"I am first and foremost passionate about New Zealand and its incredible wildlife and wild places. For most of the time I've worked for Doc, I've been able to fuel that passion, and have often acted as spokesperson representing a huge variety of the work of the department. However, I don't support the mining issue, and I've made that pretty clear since it was raised by Mr Brownlee.

"I'm not angry at Doc. But there is a need to get in a place where I can say what I need to say. This mining issue is very much about short-term gain.

"It has been a tough decision to walk away from quite a fun and exciting television role, but it was a no-brainer when I realised what was going on. I have done my last appearance for Doc on Good Morning, which I used to announce my new position," she says with a laugh.

As a conservation advocate based in Christchurch, Ms Vallance's new job at Forest and Bird, an independent organisation, will be heavily involved in lobbying against another controversial proposal - large-scale dairy farming in the Mackenzie Basin. Having grown up in the area, she is strongly opposed to any plans for intensive agricultural activity.

"I moved to Aoraki Mt Cook National Park when I was almost 7 years old. We lived in a house tucked up against the mountains at the entrance to the Governor's Bush walk, where my family would often wander.

"I woke up every morning to that incredible and awe-inspiring view of Mt Sefton and Mt Tasman towering over us, and watched the sunset turn the peaks a dusky peach shade in the evening.

"I learned about the insects, the birds, the names of clouds and, while not paying much attention to it as a child, the park was indelibly inked on my heart and soul, so that when I grew up, my path was already decided.

"I then spent five years in Twizel, with the Mackenzie Basin as my playground. The land use change and the water issue in that special, amazing place is another thing I intend to be involved with."

Ms Vallance has spent the past week or two tidying up projects, passing on her knowledge (and extensive contacts, including those within the television industry) to her successor at Doc. She hopes her new job will provide more chances to broadcast her conservation message.

"I've been lucky enough to establish myself as someone who really cares about their natural heritage and I have every intention of using that profile to let people know what is going on out there."

As part of a rebranding exercise late last year, Forest and Bird drummed up a new slogan: giving nature a voice. It's a fitting choice of words when considering its latest recruit.

"I've given the general manager a hard time, saying he has picked the loudest voice possible."

> Born in Invercargill, Nicola Vallance has spent much of her life in the South Island. Mossburn, Mt Cook Village, Twizel and Rangiora were home before she headed to Dunedin in the late '90s to study at the University of Otago, where she gained a first-class honours degree in zoology and a postgraduate diploma in natural history film-making.