Horses and fashion a winning combination 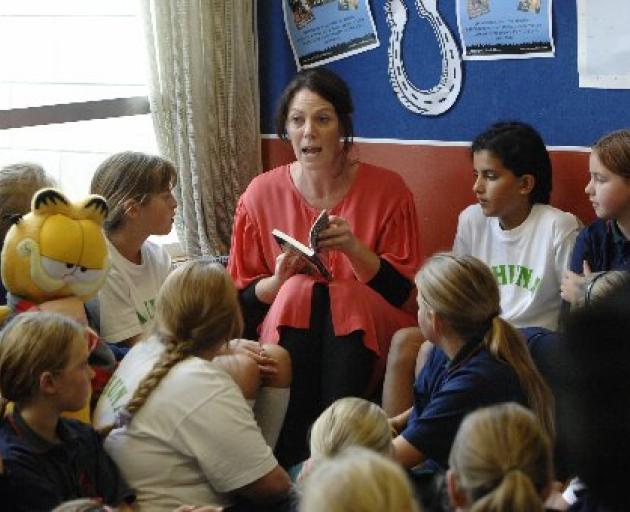 Saddle up . . . Children's author Stacy Gregg reads an excerpt from one of her ``Pony Club Secrets'' books to pupils from Tahuna Intermediate, in the school library. Photo: Linda Robertson
There's something about horsey girls and fashion that don't seem to go together but Stacy Gregg, author of the series of Pony Club Secrets for children and a fashion writer for Fashion Quarterly, loves the combination.

She was in Dunedin recently for id Fashion Week, and took time out to talk to pupils at Tahuna Intermediate School about her books.

An audience mainly of girls, some of whom have their own horses, listened raptly as she read an extract and answered questions.

But what makes so many prepubescent and teenage girls horse-mad, as Gregg was herself - and, at 39, says she still is?

``I think it's like something genetic in your make-up. I can remember that moment of first seeing a horse and going `oh my God' - that fabulous connection you have to them.

``You can spot a real horsey girl because they actually love everything about them, not just the riding, but also the tacking up and the grooming. If I walk into a stable and smell horse sweat and horse dung I think `great' - I don't have that response to other animal dung but horses - it's just great. I think it's that incredible sense of adventure,'' she said.

``There's something when you get older with horses _ it's almost a feminist thing _ you are taking on the world with your horse. You can't do that with any other animal, it's the size and the power and the scale of horses that's also compelling, that you have this bond with a big, brave, exciting animal. It's not the same with a kitten or a puppy.''

From the age of four she started saving for a pony, she said, and got her first one when she was 10. However, at 16, she went to boarding school when her mother died and had to give up riding until about two years ago.

``I was amazed when I started riding again that I felt the same way as I did when I was 12, just besotted and having an incredible emotional bond with a horse,'' she said.

She started writing Pony Club Secrets about seven years ago when her daughter was born and she found it too difficult to meet journalistic deadlines.

The manuscript was with HarperCollins in the UK for five years before she was offered a four-book contract, which extended to eight books after the second was published.

``I imagined writing very traditional pony stories and the supernatural and the big adventures just came. I didn't plan to write such gung-ho stories,'' she said.

She believes children are capable of melding the supernatural with the natural, so when a ghost horse turns up to save Issy, the heroine, it seems part of the same world.

``Also I guess the way as a child when I was desperate for a horse and didn't have one, I viewed being a good rider as literally like a superpower, it was a highly, almost hyperreal thing in itself, so it seemed natural to me that she would be able to bring him back if she loved him enough.''

After writing about other people in her journalism, she finds it a welcome change to sit down and write what is in her own mind and what she cares about, she said.

Gregg mostly writes her books in three-hour stretches at a local café. Having worked in newsrooms, she is able to ``zone out'' and write without being disturbed by what is going on around her, she said.

The first three Pony Club Secrets, Mystic and the Midnight Ride, Blaze and the Dark Rider, and Destiny and the Wild Horses are published by HarperCollins (pbk, $15).