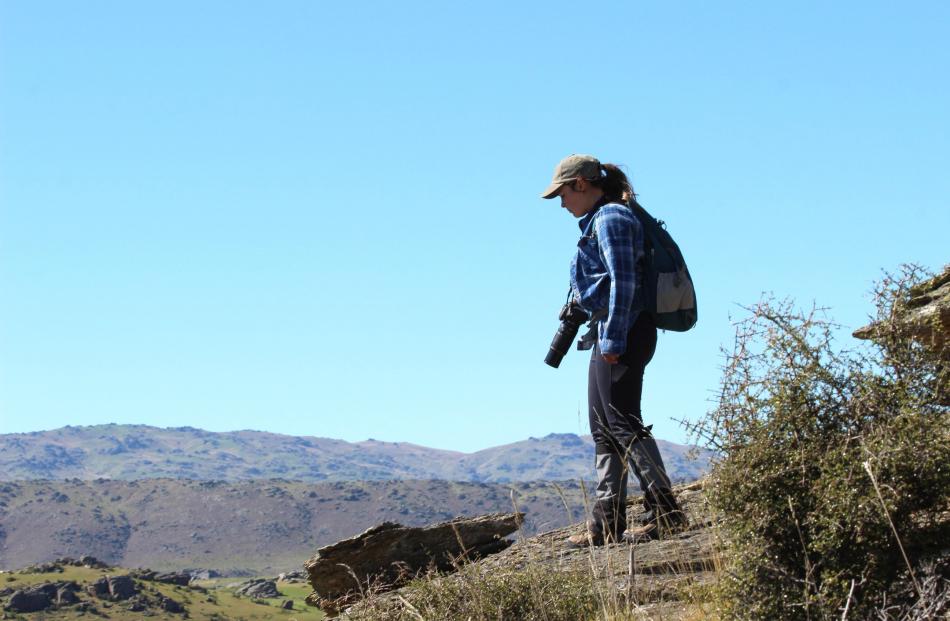 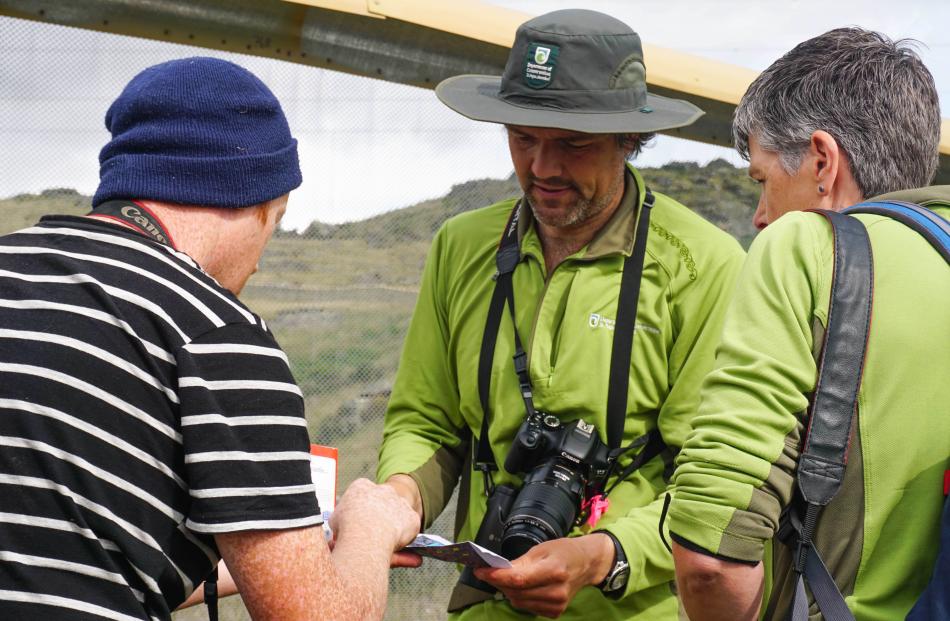 The team (from left) Carey Knox, Patrick Liddy and Amanda Salt review how they will cover all the rock outcrops where the skinks are likely to be. Photo: Anna Yeoman 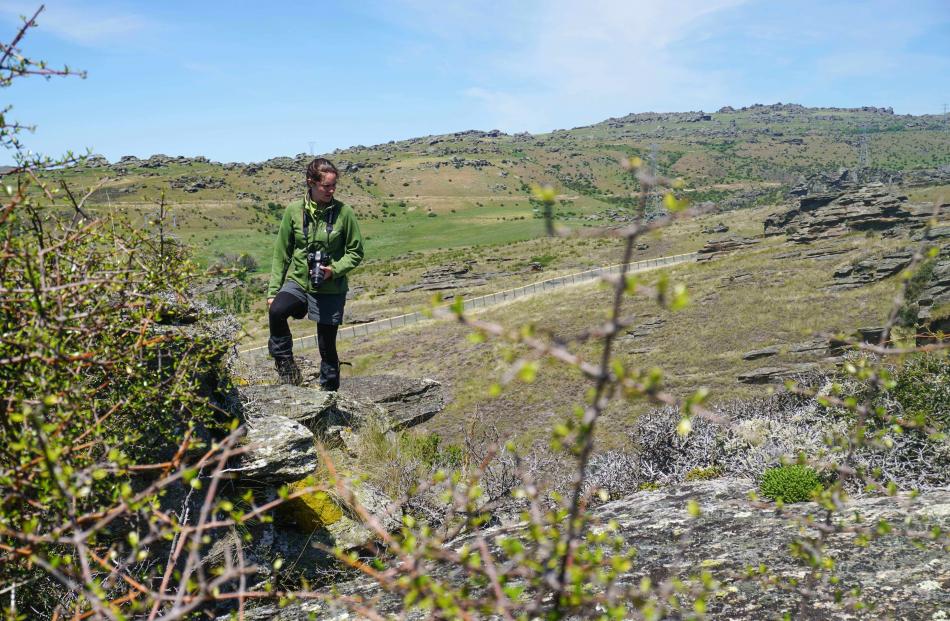 Sasha Roselli surveys the deeply creviced schist outcrops. Grand and Otago skinks will retreat into the cracks for protection from both predators and temperature extremes. Photo: Anna Yeoman 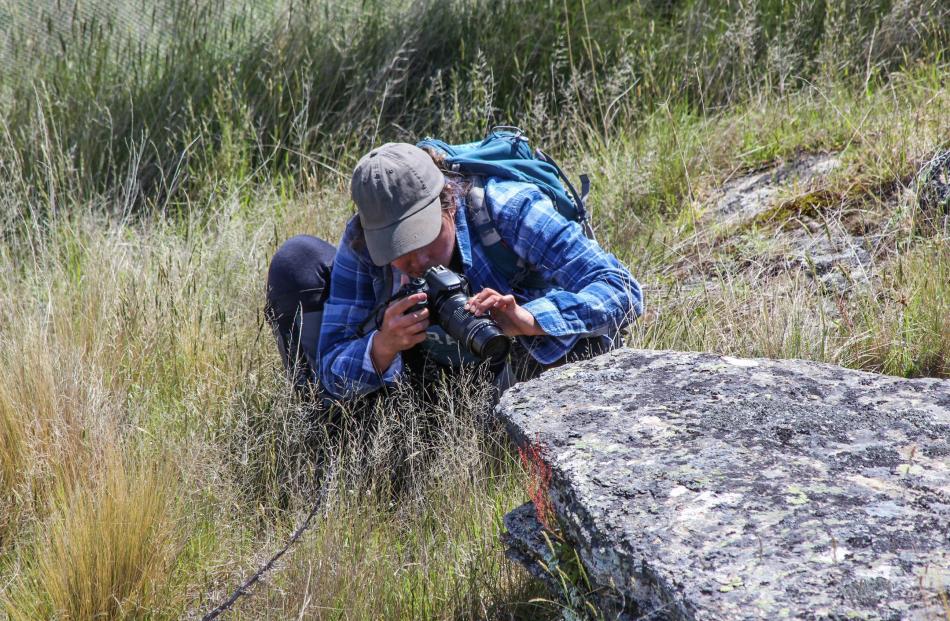 Sam Turner has a grand skink in her sights. Photo: Anna Yeoman 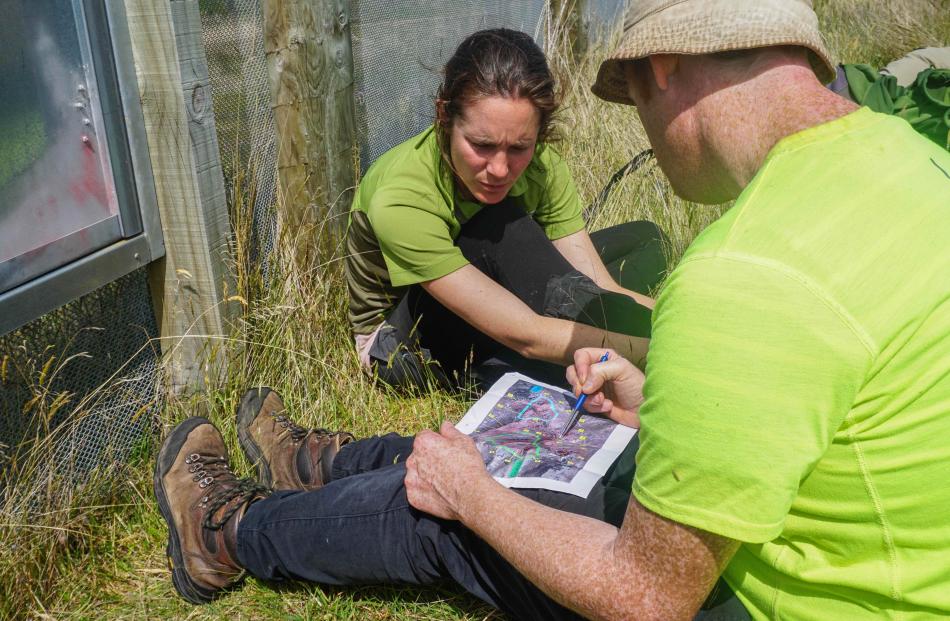 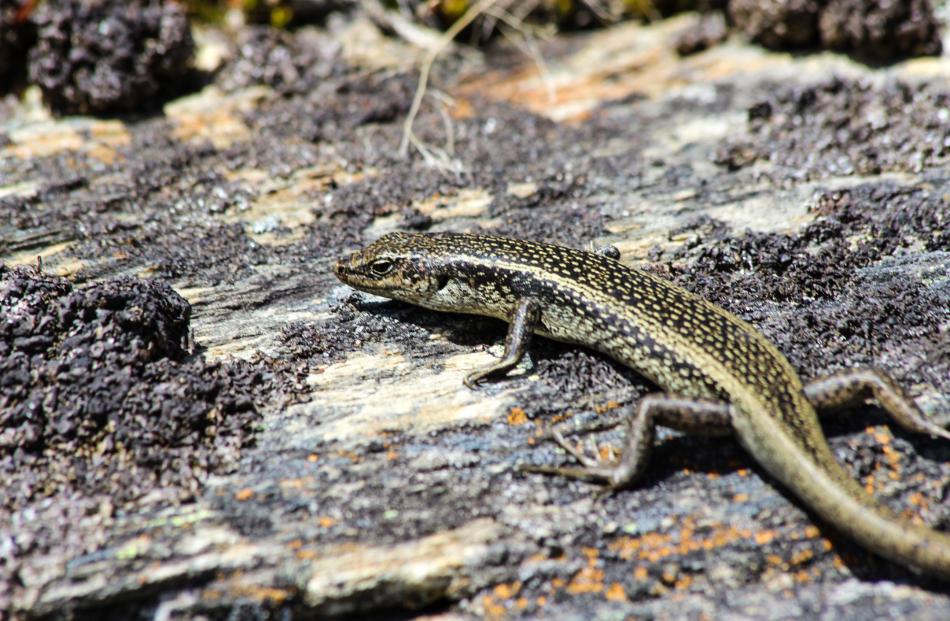 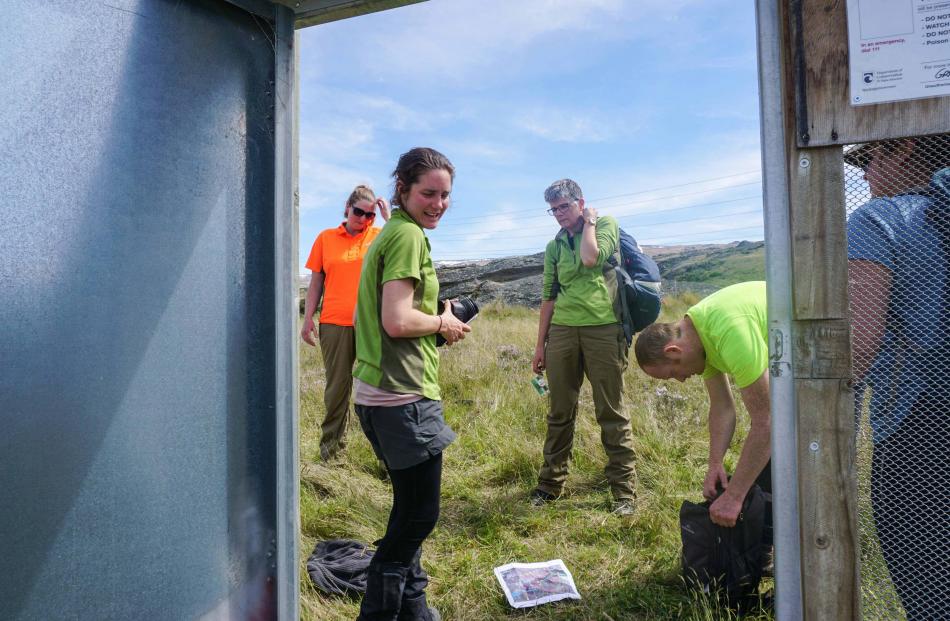 The team at the gate of MokoMoko Dryland Sanctuary after a job well done. Photo: Anna Yeoman

Anna Yeoman's experiences helping in an endangered skink project in Central Otago led to reflections on the exciting but vulnerable status of current lizard work in New Zealand.

Suddenly I saw it — my first grand skink; its speckled body sleek and torpedo-shaped, thick as a tube of toothpaste, frozen in the morning sun. I, too, froze. In the stillness we eyed each other, a gleaming black eye locked on my brown. Then, with an almost imperceptible ripple, it moved on its lichen ledge and, woken from my trance, I remembered my mission. Raising my heavy camera I got to work.

Earlier that morning, in the Doc office in Alexandra, we’d received our brief. Sasha Roselli, biodiversity ranger for the area, was co-ordinating the survey. Seven hand-held radios stood lined up on her desk, along with a collection of cameras with long telephoto lenses.

"Sorry, I meant to have all this done," Roselli explained as she hurriedly ruled up record sheets for the day in the small lined notebooks. Instead, she’d spent the last two days at a large fire in conservation land near Middlemarch. In work boots and long brown pony-tail, she greeted the team as they gathered. Carey Knox, the friendly and gently spoken lizard guru from Wildlands Consultants, four from Doc, along with myself and another student. 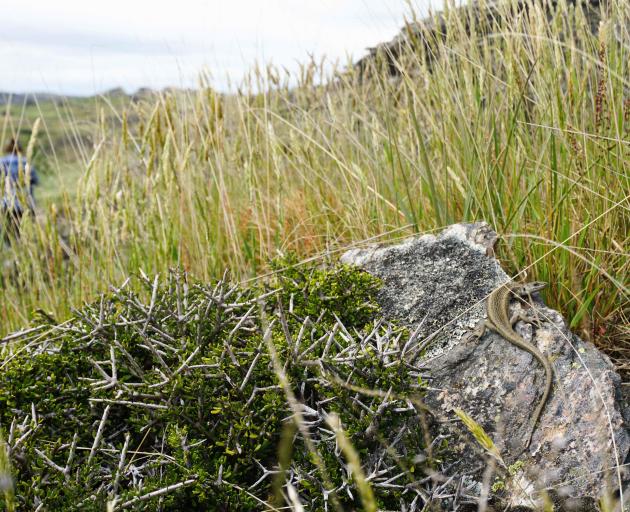 A grand skink basks on a rock beside a porcupine plant it will use as a safe retreat. Sam Turner continues the search in the background. Photo: Ann Yeoman
An hour later, three white trucks bounced their way up the potholed track to the fence of Mokomoko Dryland Sanctuary. The result of fifteen years of hard work by the Central Otago Ecological Trust (COET), the predator-proof fence encloses 14 hectares of schist-studded dryland, prime lizard country. Last year, it was ready to receive its first translocations, and 84 jewelled gecko in the autumn were followed by 69 of the nationally endangered grand and Otago skinks in the spring. But COET chairman Grant Norbury was concerned.

"We’ve been seeing the grands OK, but we haven’t been seeing many Otagos," Norbury explains.

"Using volunteers we’ve only seen three, over three surveys, out of the 36 that were introduced."

Was something going wrong?

This wouldn’t come as a total surprise to Norbury, a senior ecologist with Landcare Research.

"A lot of translocations fail around the world," he explains.

"You’re forcing animals to live in a place you want them to, and it causes a lot of stress to them."

But these lizards can also be terribly difficult to spot, so it might just be a case of needing expert eyes.

"So we’ve brought in the A-team," Norbury says, his customary wide grin hiding any nerves he may feel about the next few day’s results. 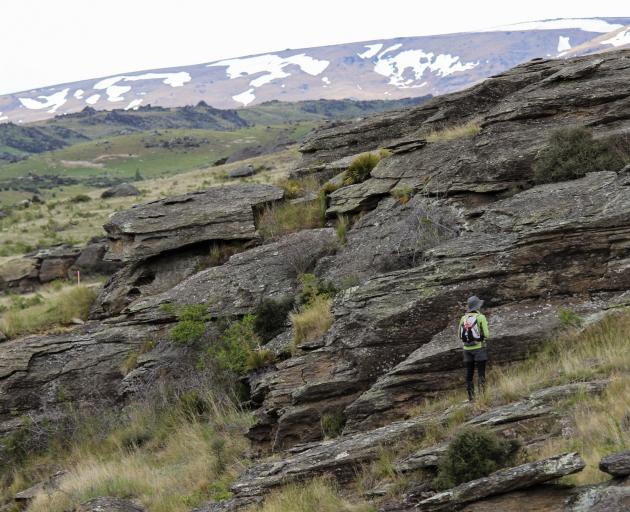 Woody vegetation surrounds many of the schist outcrops and provides great habitat for the skinks. Photo: Anna Yeoman
The morning sun is warming the air as the A-team clambers through the heavy sanctuary gate. After a few days of unsettled weather, they’re hoping the lizards will be keen to catch some sun and will soon be emerging on to the rock ledges. Being cold-blooded, they need to sun-bask to maintain their body temperature.

Our brief sounds ambitious — to get photographs of both the left and right sides of each lizard we find, focusing particularly on the distinctively patterned area between the ear and the fore-limb. These photos will then be matched with ID photos taken when the lizards were released.

The grand skinks are black, heavily flecked all over with gold. They have long tapering tails and particularly long toes, and grow to about 25cm nose to tail tip. The Otago skinks are bigger still, reaching lengths of up to 30cm, as long as an average man’s forearm. They are also black and gold, but distinguished from the grand skinks by markings that are large and blotch-like, rather than fine dashes. Both live on schist rock outcrops and eat insects, flowers and berries.

The country within the sanctuary is difficult, the schist outcrops rise out of steep gullies that are thick with vegetation. As we scramble between the rocks, I’m glad I’ve worn my gaiters. Along with the long grass and thyme there’s plenty of the woody vegetation the lizards love but soft legs don’t — matagouri, Coprosma and the porcupine plant Melicytus. 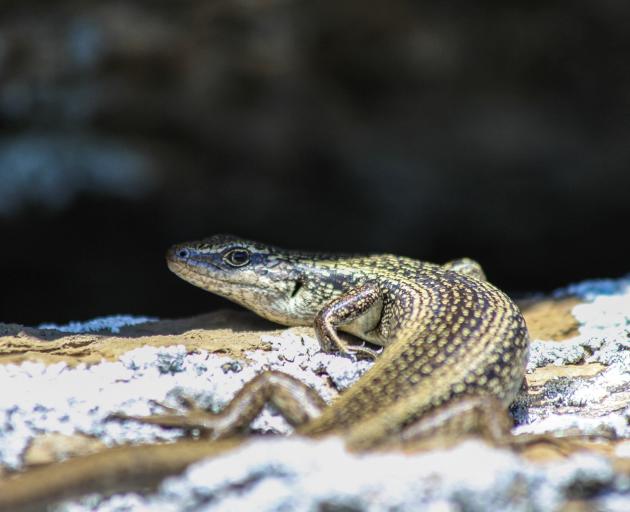 A grand skink eyes me up from the mouth of its crevice retreat. Photo: Anna Yeoman
A reasonably recent local, I’ve only in the last few years been learning that the Central Otago of popular imagination, the Central Otago of expansive golden grasslands, is only a recent human creation. Before humans came with fire and farming, it was covered in shrubs and trees, including large areas of kowhai and kanuka woodland. Moa, kiwi and takahe prowled the forest floor, tui and kaka swooped overhead, and among it all, multitudes of lizards basked on the rocks and clambered through the vegetation.

As I creep around the edge of a schist rock the size of a blue whale’s back, on its sunny side, on a ledge not far from the ground, I find my first skink. It was as Roselli had described, something that looks out of place on the rock — gleaming where the rock is matt; tubular where the rock is plate-like layers. For a moment I just pause, then slowly and as smoothly as I can I raise my camera.

Crouched legs trembling, and hands struggling to balance the long heavy lens, at first the image in my viewfinder swings and blurs. A breath or two more and I get the focus dots lined up on the lizard’s neck. The click of the shutter is alarmingly loud. Yet my quarry has stayed, and I thankfully click some more, before backing ever so slowly away to circle around to capture its right side as well.

The morning passes quickly. The thrill of the hunt is in me now, along with the rhythm of approach, pause, scan the rocks; approach, pause, and scan. Slowly and methodically we work up and down the slopes as the sun climbs higher, the silence broken only by the odd skylark and the click of a camera shutter. 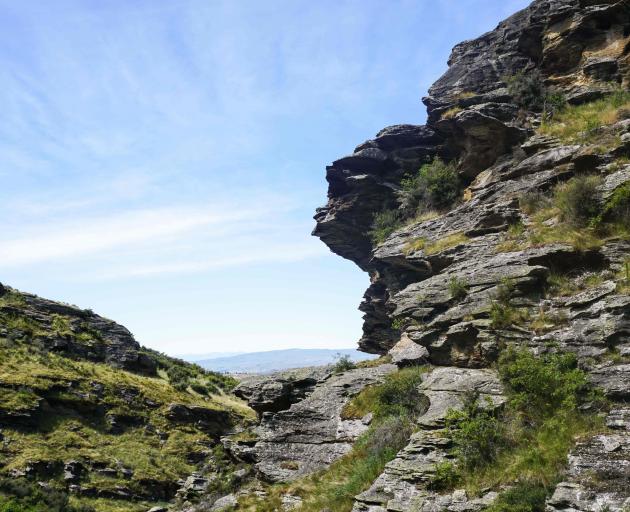 The country within Mokomoko Dryland Sanctuary consists of steep schist slopes and gullies. Photo: Anna Yeoman
By mid-afternoon, the sun burns hot on the back of my neck, and the strap of the heavy camera chafes. The lizards also seem done for the day. Having sun-basked in the mild temperatures of the morning, they’ve now left their rocks to forage in the vegetation or to seek shade in the deep crevices of the rock. We’ll return again the following morning.

As the second day draws to a close and we compare notes, it’s quickly apparent that results are good, really good. Because these lizards are hard to spot, a survey like this would expect to find 20%-30% of the number of lizards that are actually there. The team has photographed 14 different grand skinks, and 16 Otago skinks.

"But I’m always cautious. You just don’t know with these things, you don’t know what’s around the corner. So early days yet as to whether it’s really succeeding." The words may be cautious, but a grin and a laugh show how thrilled he is.

"But having seen half of what we released, is a good start."

As I climb the steps to the Doc office to return my camera, notebook and radio, my mind goes back to the previous morning, as the team gathered here. Roselli pulled out a clear click-clack pottle containing a paper towel and a chocolate brown lizard the size of her middle finger, dead.

"I’ve got something for you Carey," she said,

"I found it at the fire yesterday, I thought it looked a bit strange."

At once Knox is all attention. With expert fingers he holds it close under the deck light, red head bent over the tiny form, turning it this way and that. After a minute or so he straightens.

Grand skinks are black with golden dashes, and can camouflage well on the lichen covered schist. Photo: Carey Knox
I realise the room has been hushed, waiting. It takes me a while to realise what’s going on, and why it matters. Knox shows me the defining features, the blunt nose, the three scales above its eye, the splotchy markings on its back.

"Sort of like a cartoon of tyre tracks," he explains.

Burgan skinks are classed as nationally critically endangered, the highest threat ranking a species can have. There are only a handful of known sites where Burgan skinks survive in the wild, all in the Rock and Pillar area. With Roselli’s find the day before, a distinctly separate site in the Lammermoor Range has been discovered.

Discovered at the same time as it’s being burnt up, I wonder aloud?

"It was on the edge of the fire," Roselli says.

"We can hope they’re out there in the unburnt side too."

A couple of days spent with the lizards, and their experts, has taught me a lot. This is an exciting time for lizard work in New Zealand, new discoveries are not uncommon, and an initiative like Mokomoko Dryland Sanctuary is encouraging. Yet it all seems so vulnerable. What other populations out there are disappearing before we even know they’re there? Will we be fast enough to save these little- known taonga of our land?

Anna Yeoman is a postgraduate student in science communication at University of Otago. She is completing an internship with the Central Otago Ecological Trust.