Looking after the fish together 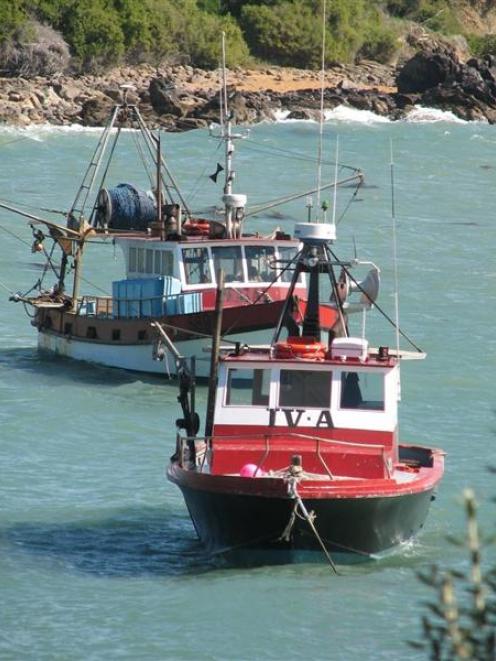 Fishing boats at Moeraki.
Effective fisheries management requires a community-based response, according to Chris Hepburn, a postdoctoral fellow at the University of Otago's marine science department.

"Marine reserves have an important role to play in fisheries management but they quite often pit the community against each other and Government agencies. But if you bring the community in to manage the fishery you tend to break that conflict."

Dr Hepburn has been closely involved in Otago fisheries initiatives, including the East Otago Taiapure north of Dunedin.

A group comprising members of Kati Huirapa Runaka ki Puketeraki and other groups with fishing interests (including commercial), it was established in 1999 and has subsequently introduced regulations for set-net use, temporarily banned paua fishing (around the Huriawa Peninsula) and, late last year, saw the Government enact a reduction in the bag limit in the taiapure from 30 to 10.

"That process took about two years," Dr Hepburn says. "We consulted with the community, including recreational fishers. Cabinet had to sign off on it.

"Blue cod, for instance, might live on a particular reef and if that reef is fished really hard - say 100 people go out and follow the rules - it will be fished out. But if you have a local management committee empowered by legislation provided through tools such as a taiapure or mataitai, then they might be able to decide to close or manage fishing pressure on that reef more effectively."

Last year, a Moeraki mataitai (customary fishing reserve) was approved, albeit with different boundaries, 10 years after it was first proposed.

The Moeraki mataitai, which covers three areas around Moeraki Peninsula - Tapuiri, Turaka Waka and Katiki - came into effect on December 16, prohibiting commercial fishing in those areas and allowing customary food gathering with permission from the tangata tiaki/kaitiaki (Maori fishery guardians).

The Punawai O Toriki Mataitai, near Nugget Point, South Otago, is another example of how a fishery can be managed without the introduction of a marine reserve, Dr Hepburn says.

"I would say that it is disappointing that the marine reserve didn't go through at Nugget Point as it would have made for better fisheries management for Otago."

"A good example is provided on Stewart Island where a marine reserve and mataitai and a thriving aquaculture industry coexist in Paterson Inlet due to good planning.

"Ngai Tahu, in particular, have been careful to include other members of the community - both recreational and commercial - in the committees that manage the fisheries within mataitai and taiapure. The inclusion of other interest groups has been key in reducing concerns that surround the establishment of new mataitai and taiapure and has helped garner support for new fisheries rules and initiatives."

Dr Hepburn is also a member of the Te Tiaki Mahinga Kai research group. Despite it establishing data-gathering methods in the past three years, it is too soon to gauge whether the East Otago Taiapure initiative has helped boost fish species numbers, he says.

"We will have to wait a number of years."