Other halves: Engaged to 'the athlete' 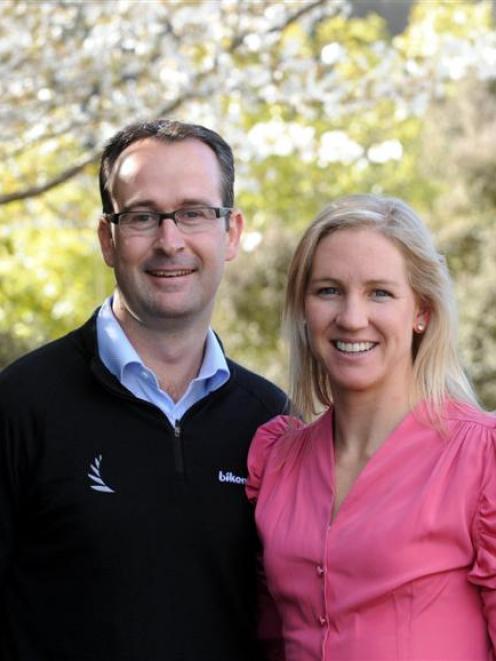 BikeNZ head sport scientist and cycling coach Craig Palmer with his fiance, and athlete, New Zealand cyclist Alison Shanks, in Dunedin. Photo by Peter McIntosh.
When Craig Palmer refers to his fiance when he is working, she simply becomes "the athlete".

But when you take into account that his fiance is New Zealand professional cyclist Alison Shanks, and he not only trains her, but her peers as well, there is little wonder the couple strive to keep their public relationship professional.

"It's definitely a challenge; you have to work hard to maintain a professional role," Mr Palmer said.

The pair first started working together in 2005 when he was consulting for various sports teams at the New Zealand Academy of Sport.

He took her netball team, the Otago Rebels, for physical training sessions and soon got her involved in a running squad and cycling.

"One day I put her in the lab and the results were very encouraging," he said.

That year she made the transition from netballer to cyclist and he became her personal coach.

"There are very few disagreements, when it comes to the coach and athlete relationship ... she has been around a while, so she knows what she needs to do."

Along with his commitment to her, he is the head sport scientist for BikeNZ which allows him to travel with her to competitions.

However, Mr Palmer often surprised people by telling them that travelling with Shanks did not necessarily mean spending quality time with her.

"We don't share a room when we are away. I room with the staff and she rooms with the athletes," he said.

People also mistakenly believed spending so much time together, in their respective roles, would be difficult.

"A lot of people say 'gee it must be challenging', but it's actually good because you know the person so well. It is 24/7, that's just the way it is [but] we have not known it any other way."

The one month off the bike she had each year was "completely different" with the couple being free to do whatever they wanted.

However, they also knew her career as a top cyclist would not last forever.

"There are times where it won't just be cycling ... some people say it's a sacrifice, but I think it's a privilege," he said.

In the meantime, he was enjoying some of the perks of being with a "relatively well-known local athlete", including eating plenty of beef and lamb.