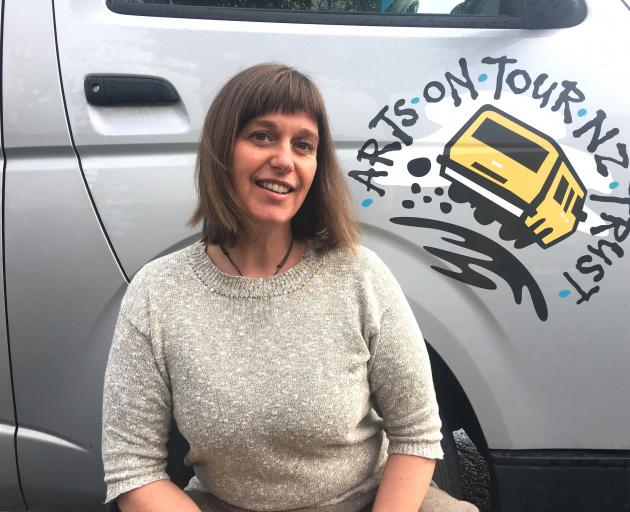 Martine Baanvinger uses her whole body to perform the stories she tells.

"I'm not a circus performer, I'm not hanging upside down in a silk, but the fact you have full body awareness, you use your body to portray feelings.

"The shape of my body represents the feeling of the situation."

For the past seven years Baanvinger has been developing what she calls a "direct and honest storytelling style" infused with physical theatre.

It is a type of theatre she believes creates a better connection with the audience.

"These days [theatre] is a lot about face, gesture and word and the rest of the body seems to be quite forgotten. It's less intriguing to watch."

Physical theatre uses the whole body to tell a story.

"In this performance, I'm doing a really intense physical workout while I'm doing my text to show the intensity of living self-sufficient 1000m high in the mountain."

Baanvinger's latest work, Solitude, calls for intense physicality as she is telling the story of Annie, who hid in the remote mountains of Kahurangi National Park for 40 years with her lover Henry Chaffey in the early 1900s.

"She had to be self-sufficient living 1000m high in the cold. She would have had to keep the fire going full-time, make everything, grow a garden - all really hard work." 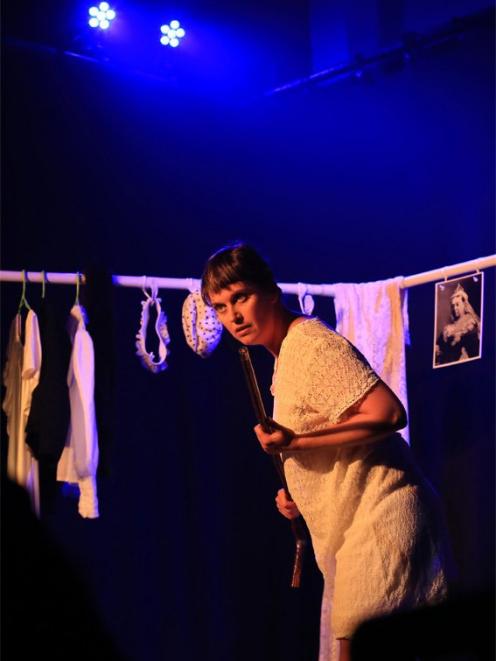 Martine Baanvinger tells Annie's story in Solitude. Photo: Doug Brooks
Baanvinger stumbled on to the story literally. She was tramping as part of an artist retreat when she came across the hut Annie and Henry had lived in.

"I was blown away. How could someone live here for 40 years not coming out. It is on this tiny plateau, so isolated."

When she got home she began researching the story realising how much time Annie would have spent on her own keeping the home fires burning while Chaffey went off prospecting.

"She was there when the Murchison earthquake happened [1929]."

Baanvinger came to realise their story was a great love story as Annie left her husband and sons to be with Chaffey in the mountains.

Her research found that her former husband was abusive. Her children were about 13 or 14 years old when she left.

"She got a boat to Motueka. She had no idea what she was getting herself into, but she needed to get away to follow the big love of her life."

"It was fantastic to get the story first hand. So based on all that, I sat down and wrote a play - that was two years ago."

She is now touring regional towns across the country with the help of Arts on Tour.

It was a wonderful opportunity for an artist who usually did everything for themselves, being able to focus on her work instead.

The response to the work has been "wonderful" with many in the audience curious about the story.

"I do a Q and A afterward, as it is a true story and people have questions. Ninety-five percent of the audience stays, which is a good indication they are intrigued."

As the play is very personal and involves physical performance, it requires the audience "to stay with me".

"I'm alone on stage so we depend on one another. It gives it an extra edge. I'm really close up to 95% of the audience, so I'm addressing it exactly to them. It creates a strong bond and afterwards you feel as if you know each other a bit."

The physicality of the role also means it keeps her fit, but she relies on adrenaline mostly to keep her going.

"When you use your body on stage a lot of adrenaline and energy rises so quickly . . . you harness that energy, holding 80% inside you which creates a lot of tension inside the body allowing the emotions to play out in a very full, round, detailed way.

Being successful at this type of theatre required experience.

"I would not have been able to do this 20 years ago. I'm also so passionate about this story. I really want to tell the story to people."

One of the reasons she could do it now was the training she had been doing with Lynne Bradley from Zen Zen Zo Theatre (physical theatre) in Brisbane over the past seven years.

"It's hardcore, really intensive training. She is a fantastic teacher with an amazing amount of knowledge you gain in a week, and every year it strengthens my practice."

It has also enabled her to develop her storytelling style.

Baanvinger, who was born in Holland, studied theatre at the Theatre Academy in Amsterdam in the 1990s.

She came to New Zealand as part of her travels around the world and, as sometimes happens, she met a man while tramping the Heaphy Track, who was later to become her husband.

A year later she found herself settled in Queenstown where the pair ran a juice bar on Steamer Wharf.

But they found juggling parenthood with a business a struggle and they craved warmer temperatures.

So in 2009 they headed north to Golden Bay where they knew they would not only get the warmer temperatures, but also a more self-sufficient lifestyle.

"It's warmer, you can grow all year round. It's such a joy to be here."

They also loved the community feel of the area which is very supportive.

When her children got older, Baanvinger set up her theatre company DramaLab to create professional touring productions and also teach and train young people.

In October, she is also debuting Aperture, a performance about the life and the work of New Zealand arts photographer Ans Westra, at the Nelson Arts Festival.