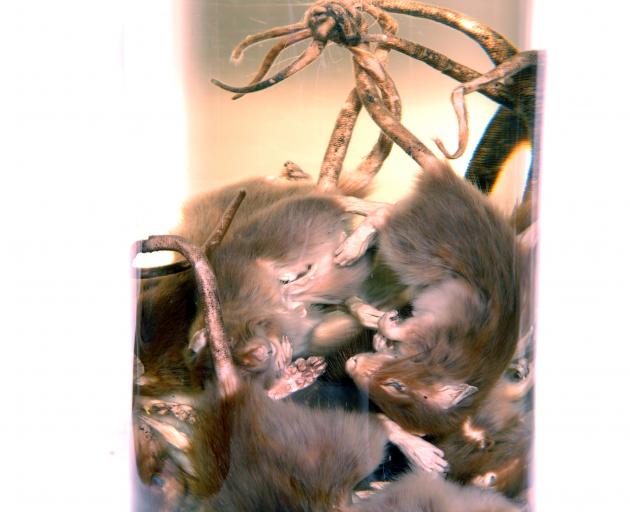 Otago Museum's rat king. Photo: Supplied
Some of us can't bear to spend too much time with our siblings, but for seven young ship rats (Rattus rattus) there was no choice. Huddled together, their tails became entangled by a sticky substance and the strands of horsehair used to build their nest. As they pulled away from each other the knot tightened, inextricably binding them together. This extremely rare and unusual occurrence is called a rat king. The name is derived from the German term ``rattenkonig'', which some argue is a reference from Historia animalium, a Renaissance era bestiary; others believe it derives from older folklore, where stories talk of an aged rat carried on top of the entangled legions and treated as royalty by the pack.

During medieval times, knots of rats were considered a bad omen, particularly associated with plagues, death and witchery.

Unlike burrow-building Norwegian rats (also known as brown rats), ship rats (also known as black rats) prefer to build their nests in high, dry places such as tree hollows or within the roof spaces of houses. They use materials that are close by to create a warm nest chamber to give birth and raise their litter of pups (baby rats). The Dunedin rat king fell from the rafters of the Keith Ramsay Ltd shipping shed, once located on Birch St during the 1930s. An account by the junior shipping clerk, Walter Lawry, described the knot of seven young rats falling to the floor from above. The squeaking litter was immediately followed by a parent, which reportedly protected its offspring so fiercely that Mr Crust the tally clerk had to use a pitchfork to defend himself as he approached. The men must have eventually caught and killed them, including the parent (head count has it at eight rats in the jar). It's unclear when they were deposited with Otago Museum, but today they are preserved in a large 10-litre fluid jar in Animal Attic. This, Dunedin's rat king, is one of very few examples preserved outside Europe.

A few theories have been offered to explain the tendency of ship rats to be rat kings. Proportionally, ship rats have long tails with prehensile abilities allowing them to grasp. While this adaptation is useful for climbing, researchers suggest that the tails of young pups may have a grasp response to foreign objects. This could be one reason for the higher occurrence of entanglements in this species. Nesting behaviour is another factor: the presence of binding material, such as horse hair combined with substances such as poo, blood, food, or a build-up of sebum - an oily skin secretion - could create a scenario for a tail tangle. Ship rats are also the rat species that closely coexist with people - we are more likely to encounter these rat neighbours than others. There have been reports of knots in other species: a wood mouse king (Apodemus sylvaticus) was found in 1929 in Holstein, Germany, and in 2013, a squirrel king in Regina, Canada was rescued and untangled by veterinarians.

In 2011, Dunedin's rat king became the first Otago Museum object to feature in Ripley's Believe it or Not.