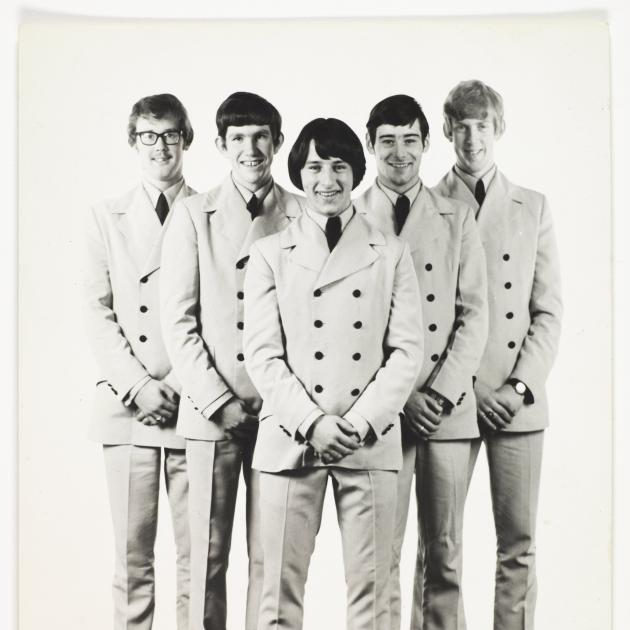 Dunedin is no exception, with one particular band — The Titans — ticking all three of those criteria.

The Titans came to Hocken Collections’ attention in late 2018, with a donation from the family of David MacDonald, the band’s manager. The donation included images, concert posters, reel-to-reel tapes and a scrapbook of photographs and clippings.

We processed the donation quickly and put together a timeline of a local band that "could have been". We discovered one original song, Mr Spaceman, had been recorded over with practice race calls, but another, I am me, and a cover of Louie Louie were intact. 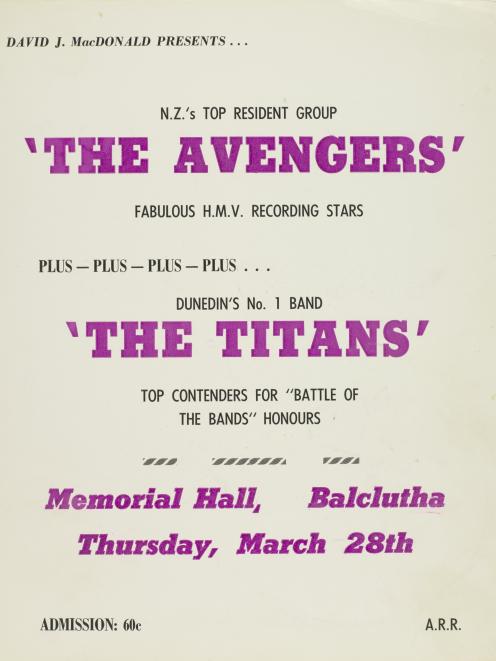 With visual and audio pictures of the band, we started to piece their story together, using school records and local publications to find information about their history, performances and rise to (almost) fame.

The Titans were part of the 1960s Youthquake. They began as The P-Kay’s at St Paul’s High School in 1964. Known briefly in 1965 as Rob and the Titans, they had their own show, "Titan Time", and played with Gary and the Raiders for the live Ready Steady Go gig. By 1966, Rob had left, and their new line-up was set — Kevin Lynch (guitarist and songwriter) and Paul Simpson (bassist) were joined by vocalist Clive Blackie, Adrian Bennett (rhythm guitar and vocals) and Denis Winder (drums).

Winder, by all accounts, was a drum sensation, nicknamed Ringo for his talent and his Ludwig drumkit. They played locally, on the local Bible dance circuit, and opened for Larry’s Rebels and The Avengers at venues such as The Ag Hall.

Wearing their pale blue suits with orange buttons, they would have looked the part. Sadly, we only have black-and-white photos of their stage outfits.

In April 1968, they won the local heat of the Battle of the Bands, although this created controversy, as the Letters to the Editor column in the April 10 edition of The Evening Star showed: "Not until the judges announced the results did anyone have any doubt that the new Countdowns had actually won ... the majority was wrong, and the decision went to The Titans. The main reason ... the support from about four dozen girlfriends, who literally sounded like 400 ... This must have swayed the judges."

However, according to one eyewitness, that evening "they just rocked".

Sceptics aside, they won the South Island final in Christchurch the following week and travelled to the National final in Auckland, coming second to the Hi-Revving Tongues, arriving home as local heroes and earning the unofficial name "The Mighty Titans".

But fortunes change, and by the end of the year, band members had left and were replaced, before they disbanded for good. Some joined other groups, or left the scene altogether.

Lynch continued as a musician, and was named Variety Club Entertainer of the Year in 2004. Bennett and Phil Tilbury (Bennett’s replacement) are the only surviving Titans, and Tilbury still records music to this day.

The Hocken’s collecting of The Titans doesn’t end there: in late 2019 it acquired a disc of recordings by "Rob and The Titans". The four songs are covers reflecting the band’s influences in 1965, when the disc was recorded at Dunedin’s Broadway Recording Studios. The recordings were never officially released, and whether they were recorded only for the band, or for a future release, is unknown.

To access these items, visit The Hocken at 90 Anzac Ave, Dunedin, or go online at otago.ac.nz/hocken Hocken Collections is open to the public, Monday to Saturday, 10am -5pm.

- Amanda Mills is Curator of Music and AV Collections at Hocken Collections.