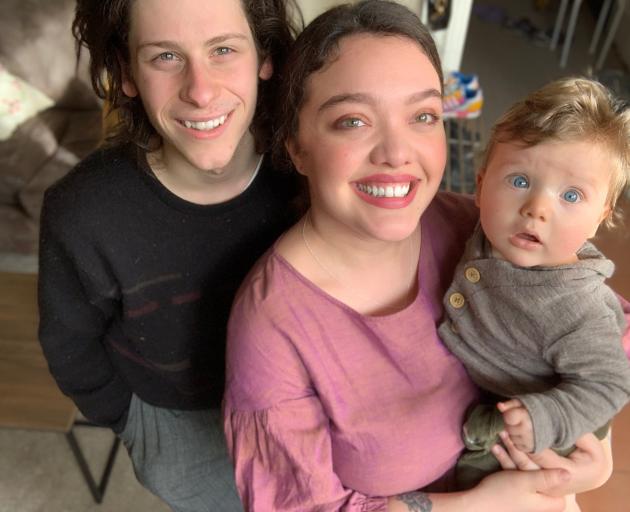 Jasper Holloway, Leah Dodd and Asa Holloway. PHOTO: SUPPLIED
Young parents are treading gently on the earth as they raise their children. Hagar Ozri talks to a couple — her son and his partner — raising a plant-based son.

I became a mother at the age of 24. I was a vegan, and very idealistic.

I cared about the environment and cruelty to animals and then, as a mother-to-be, I became very health conscious as well.

We didn’t have a lot of support as vegan parents — everyone thought we were putting our baby at risk of malnutrition: "not enough iron ... low B12", they said. But we did it anyway.

We made spirulina smoothies and cooked a lot of vegetables with the addition of tofu, seaweed and tahini.

Now I am a grandmother. My son Jasper and his partner Leah are young parents, at 21 years of age, to a beautiful 8-month-old baby named Asa.

They are conscientiously raising Asa on a plant-based diet.

The term "plant-based" is used to describe an eating regime of mainly vegetables, fruits, nuts and seeds, with attention to food sourced sustainably.

I interviewed them to ask how their journey has been for the last eight months since Asa was born.

I asked the questions and Leah answered:

Q What are you feeding your 8-month-old son?

Alongside breastfeeding, we feed Asa as many fruits and veges as possible, with a focus on leafy greens/beans/lentils for iron. He basically eats what we eat. Most mornings, we’ll have porridge together, stewed apple or banana, and hemp seeds. He loves porridge, bean chilli and smoothies. The other night, Asa had lentil popelettes, which are actually super easy and cheap to make! He’s been having plenty of winter produce lately too, like pumpkin and silverbeet.

Q What is behind your choice of diet — is it an environmental decision or a personal health one?

A bit of both — there comes a point where meat-eating kids realise that they’re eating animals, and it doesn’t sit right with me teaching kids to love animals and then having to reconcile that love with eating them. You can get all the nutrients without eating meat. We do give him a bit of egg yolk or yoghurt here and there, but not any meat. And raising a kid in this ecological climate, eating meat just doesn’t feel logical. We’re raising Asa to be equipped to live in the world he’s inheriting. We’re really working on reducing food waste, by saving up food scraps for stock and composting the rest. Ideally, he’ll grow up with respect for the planet!

Q Would you like to be strict with Asa when he is older? For example — will going to McDonald’s with friends be OK? Or will you consider letting him eat meat "sometimes"?

It’s his decision — I want to raise him by example, fully aware and educated with his choices. We won’t give him meat or food like McDonald’s at home, but if he is aware of what he’s eating and where it came from, then that’s his choice. I’m sure many parents would like to shelter their kids from certain things, but it’s a bit unrealistic — I think all we can do is try to nurture a love for plant-based eating early on.

Q Is there a growing movement of plant-based parents?

Definitely! There’s a huge community of plant-based families on social media, some of which provide good resources for nutrition. We don’t know many personally (we actually don’t know many other parents in general) but they are all over the world, and it’s certainly a growing movement, which is awesome.

Q Do you find it difficult to find things to feed your boy?

No, not at all. Having a baby motivates us to eat well, since he eats what we do. He loves his food! He gets excited to eat, and is always so curious and trusting when it’s a new food. Asa is such a dream baby — we’re so grateful. As his parents, we’re very excited to nurture a healthy relationship with food and a plant-based, sustainable lifestyle for him.

I am a very proud grandma! These beautiful young people are such good parents, so wise, relaxed and healthy. 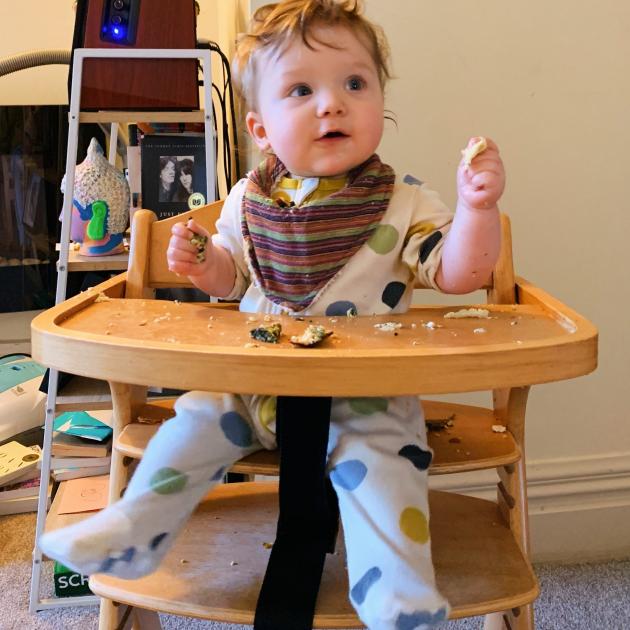 Asa Holloway
We can all be proud! Leah and Jasper represent a new generation of global citizens who are taking action themselves and not waiting for governments to take responsibility.

These young parents are aware of what the mission at hand is and are doing all the right things to raise a child in the present day of rising temperatures, unsustainable farming and industrial food. The plant-based diet doesn’t have to be a strict regime of only plant foods (as the vegan diet is for example). The plant foods could be eaten as an addition to wild meats, free-range eggs or organic dairy products.

It is a way of eating that is healthy for us and the planet, as we consider the environmental impact of the choices we make as consumers. 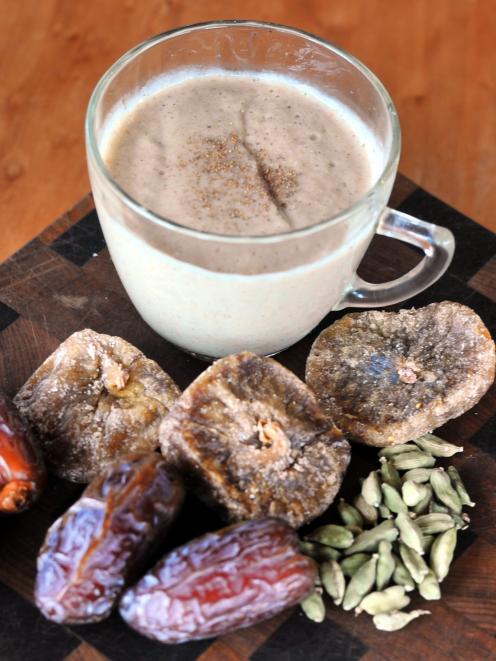 This is an Ayurveda-inspired health drink.

All of these ingredients combined in one drink makes for an excellent morning smoothie for all ages, mother, grandmother, father, grandfather or child.

In a small saucepan, combine milk, and cardamom.

Bring to a boil over medium-high heat, then reduce heat to simmer for 10 minutes.

Remove from heat, let the milk cool down.

Transfer to a blender, add figs and dates, and blend until smooth.

Drink milkshake warm or when it cools to room temperature. 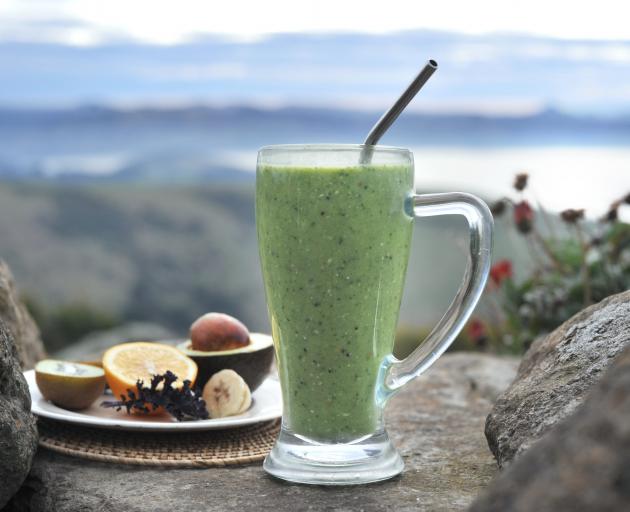 A health-kick smoothie with attention to greens — a great way to sneak in the greens.

Place all the ingredients in a blender, blend and serve. 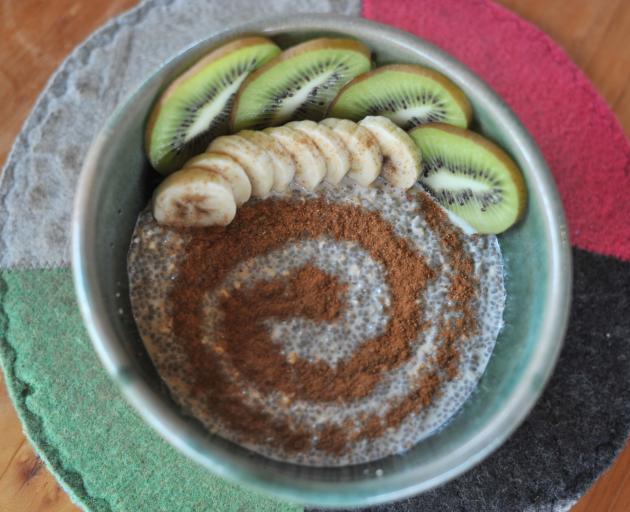 A no-cook soaked porridge with chia seeds, which are a great aid to digestion.

Mix the milk, cinnamon, chia seeds and oats in a bowl.

Let it sit, covered, overnight or for a couple hours in the fridge.

When ready to eat, peel the banana and chop in half.

Mash one half and mix it in with the porridge, slice the other half for a topping.

Wash the kiwifruit. You may peel the skin off with a sharp knife and slice, or keep the skin on and slice. Remove the tough bits on either end.

Serve the porridge with the bananas and kiwifruit and drizzle optional maple syrup on top.

Serve these in a burger bun or as a snack — great for school or work lunch.

½ cup of nuts of your choice (walnuts, brazil nuts, peanuts or a mix)

A handful of fresh herbs such as oregano, coriander, parsley, chopped

Place the nuts and seeds on a lined oven tray and roast in a 100degC oven for 10-15 minutes. Set aside to cool.

Place the onion and garlic into a food processor and pulse to chop, add the nuts and press on the pulse button until all the nuts are chopped. Empty the contents into a mixing bowl.

Drain the potato and kumara well, mash and add to the mixing bowl.

Add the chopped kale, herbs, salt and spices into the bowl and mix.

Now form into cakes by using a tablespoon to scoop out the mixture (it will be sloppy) into your hands. Form a ball, a little larger than a golf ball, and press between your fingers to form cakes, washing your hands between cakes so the mixture doesn’t stick. Place the cakes gently on lined baking trays, or directly on to a hot, lightly oiled skillet.

Let the cakes cool before handling.

Serve or store in the fridge when completely cooled. Enjoy!

Tip: You can freeze these. Place on trays in the freezer and bag when frozen.