Brisbane on a budget 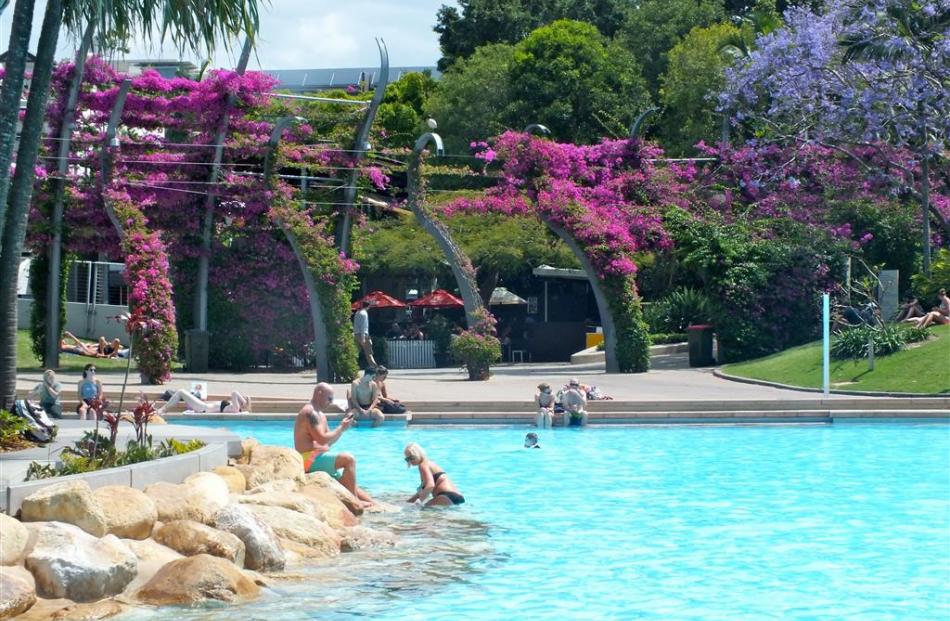 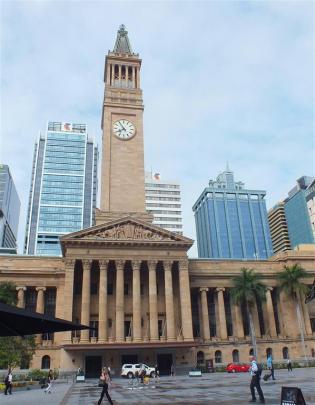 There are free tours of Brisbane’s town hall. 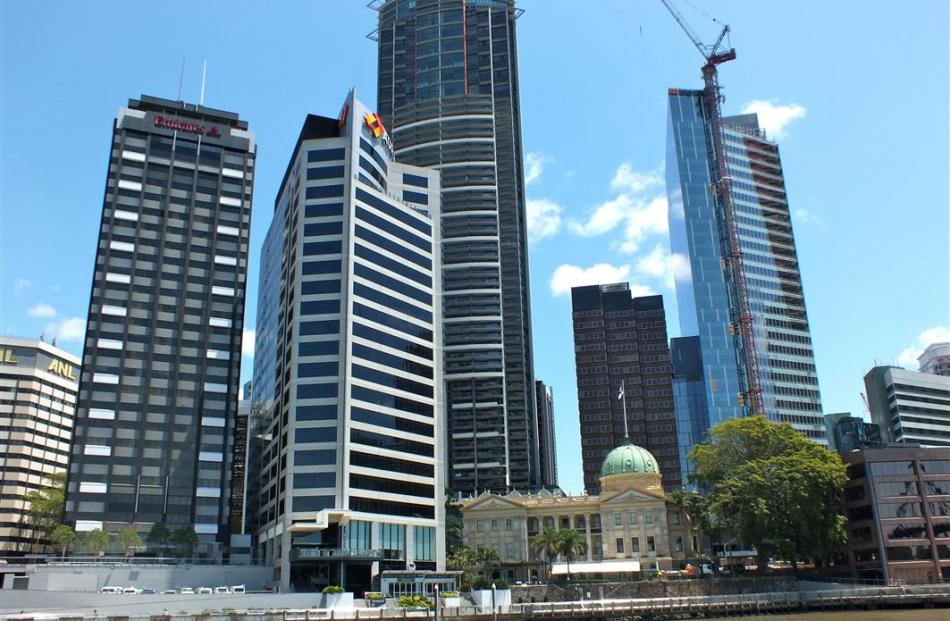 The 1889 Customs House is dwarfed by new buildings. 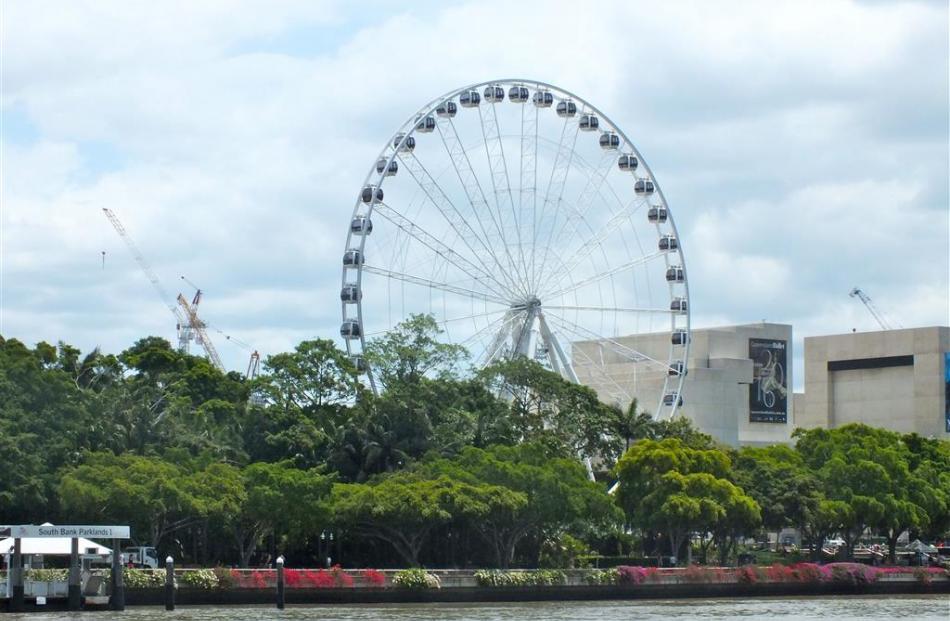 The Wheel of Brisbane is a riverside attraction. 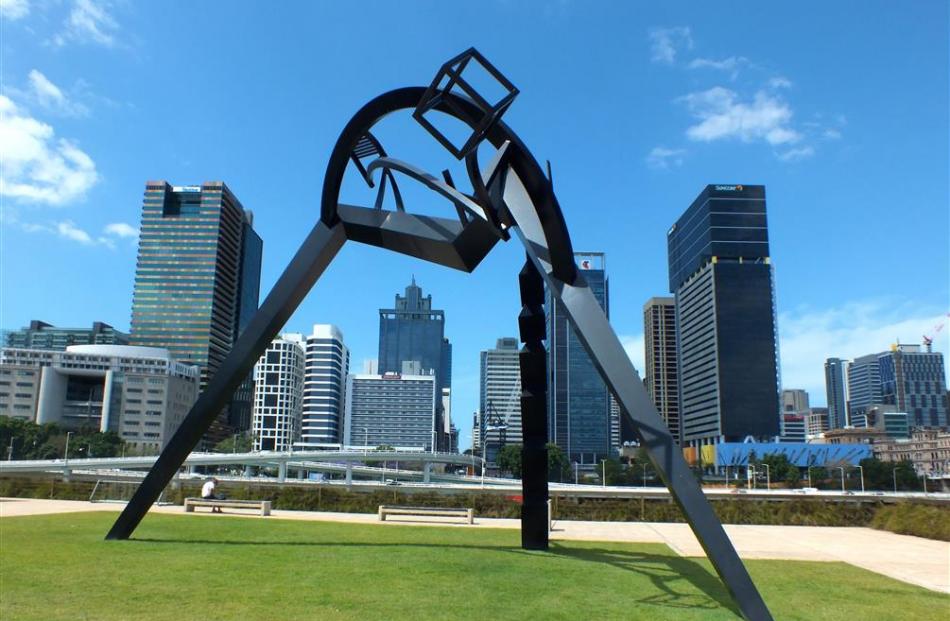 Outdoor art abounds in Brisbane. This is Approaching Equilibrium by Anthony Pryor. 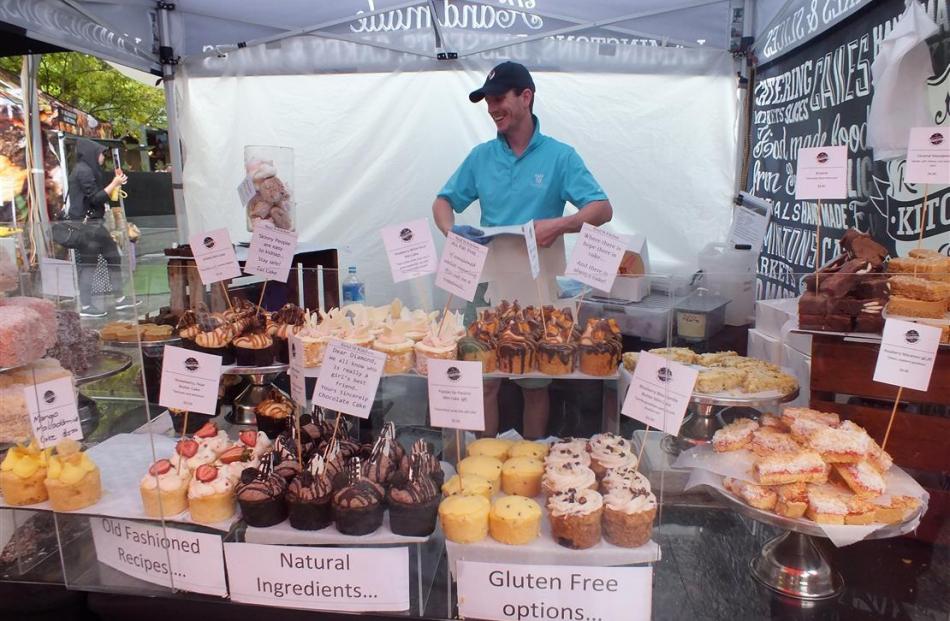 A cake stall at the Wednesday market at the top end of the Queen St Mall.

Save here, splurge there. Gillian Vine applies the concept to Brisbane.

One of the best ways to get the most out of your holiday budget is to balance expensive items with cheapies.

Hotels are the obvious starting point but budget accommodation may be miles from attractions you want to visit, so the resulting transport costs can wipe out any savings.

On a visit to Brisbane, I stayed at the Mercure, slap in the middle of town. Reasonably priced - a recent special started at $150 a night - it is an easy walk from the hotel to the Brisbane River, Wheel of Brisbane and city botanic garden, as well as the Queen St Mall and the Wednesday market at the top of the mall.

The hotel has a rooftop pool, although it is more fun to splash at the public riverside facility, Streets Beach at South Park. Patrolled by lifeguards year round, this is Australia's only inner-city man-made beach, whose sparkling lagoon is surrounded by sandy beaches and sub-tropical plants. Best of all it's free.

The town hall was just across the road from my hotel and free hour-long tours of the complex are available from 10.30am daily; just ask at the ground-floor office for details. There are a couple of other freebies here, too. On the third floor is the Museum of Brisbane, which has a largely pictorial presentation of the city's history and the role the river has played in the development of the area from convict settlement to modern times.

The museum takes bookings for clock-tower tours. You don't get a particularly good look at the 5m mother-of-pearl clock faces (four of them), the biggest in Australia, nor the once-famous view of the river as developers have plonked high-rise buildings in the way and only a sliver of water can now be seen. It is worth going up, though, just to ride in the ancient lift and hear the informative guide.

If you are in Brisbane on a Tuesday, follow a decades-old tradition and attend one of the free lunchtime concerts from noon to 1pm at the town hall. It's luck of the draw what you'll hear but the standard is consistently high with jazz and brass bands, classical and contemporary music, and even flamenco offered. Nearby, Queen St Mall is another good spot to hear free music, while an easy walk across the river to South Park Parklands can culminate in a musical experience.

Tucked into the shadow of the town hall is a bus stop on the city's free, 20-minute loop service, and there is a free CityHopper ferry service (see www.translink.com.au for details for these freebies). Electric bikes are an inexpensive option and Brisbane has an extensive network of bicycle paths. See www.citycycle.com.au for where to get a bike and free helmet.

For those who prefer to see the sights on foot, Brisbane Greeters (www.brisbanegreeters.com.au) is a great way to learn more about the city. I opted for the outdoor art walk, which opened my eyes to the wealth of outdoor art, much of it installed as the result of an initiative by former state premier Anna Bligh. When a shower of rain caused us to seek shelter, my Brisbane Greeters guide, Vivienne, bought me a cup of coffee to demonstrate why the city is now renowned for its excellent brews.

Having done so much for little or nothing, head for the river. A round-trip cruise to the Lone Pine Koala Sanctuary and entry to the park costs $A75 ($NZ80.60).

If cuddling a koala isn't your thing, $A70 buys a combo ticket for three river-based attractions. Begin by cruising the Brisbane River on m.v. Neptune (www.rivercitycruises.com.au). Have a cuppa while River City Cruises co-owner Darren Timms provides lively commentary as he guides the vessel quietly downstream to Newstead, where you can hop off and catch a later service back, or stay on board for the hour and a-half round trip. For those who want a more active river experience, the company also offers two-hour catch and release fishing tours.

Leave the river and take in some of the best bird's-eye views of the city on a 12-minute circuit on the Wheel of Brisbane before wandering along the river for a bite of lunch at the third inclusion on the combo ticket, Plough Inn pub. Tip: take your tray upstairs where it's a bit quieter.

When it comes to food, Brisbane has so many good restaurants that it's hard to know where to start. On a nostalgic note, I revisited Jimmy's in Queen St Mall, virtually unchanged since I last was in Brisbane almost 20 years ago. In contrast, The Jetty is a newer South Bank eatery with excellent modern food, while back on the city side of the river, the Pony Lounge has it all - fabulous Australian-themed food, a well-balanced wine list and great water views.

Having done Brisbane's bargains, splurging on a fine meal is the perfect way to end a visit to Queensland's capital.

Gillian Vine visited Brisbane as the guest of Visit Brisbane www.visitbrisbane.com.au and Tourism and Events Queensland www.queensland.com. She flew with Virgin Australia www.virginaustralia.com/nz, which has three direct flights a week from Dunedin - on Wednesday, Saturday and Sunday. Previously leaving Dunedin late in the afternoon, flights now depart at 8am, arriving in Brisbane at 10.05am local time. Incoming direct flights to Dunedin, arrive at 11.40pm over the winter.