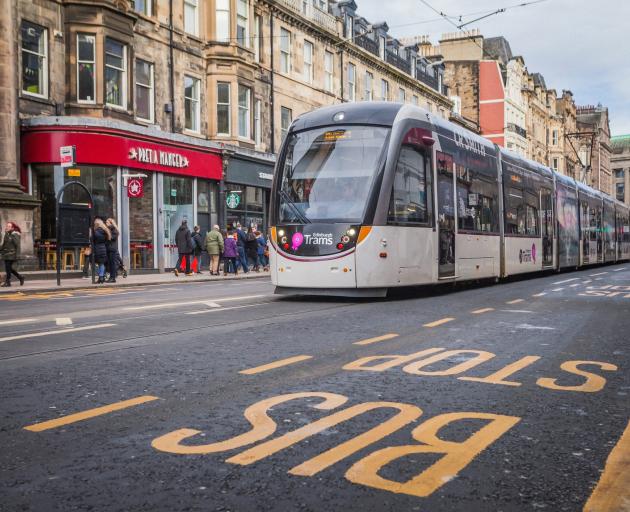 An electric tram glides along Princes St to St Andrew St before terminating in York Pl. The popularity of the route means some shoppers, workers and students stand for the duration, gently swaying with the motion of their quiet transport.

No, we're not talking about Dunedin - yet.

These streets, their names well known to Dunedin residents, are in the centre of Edinburgh, the ancient seat of Scottish majesty that gave the southern city many of its markings.

The Edinburgh trams start early and finish late, their millipede forms running between 5am and midnight. During peak hours there's hardly a wait at all, as another arrives every three minutes. That is scaled back at other times, but you'll still not be left standing for more than 10 minutes in the cool gloaming of an Edinburgh evening.

The sleek modern trams commenced service in 2014, running over a 14km route from Edinburgh airport to York Pl. They have being showing a working profit since 2016, just two years after the service began and two years before a surplus was expected.

Tickets can be bought from cash machines at tram stops and an adult day ticket, which can be used on both the trams and the Lothian buses - which are also operated by the City of Edinburgh Council - costs £4 ($NZ7.75).

There's very little walking involved in finding a tram stop. They are mostly 400m-600m apart. Stops are brief for the 250-passenger capacity trams, which seat 80 passengers and can accommodate 170 standing up, providing quick travel throughout downtown Edinburgh and out to the airport.

Each tram has a conductor or inspector whose task is to inspect passengers' tickets. Fare evasion is calculated at 3% of passengers. The thrifty Scot is apparently happy to pay. Or if not happy, then at least sanguine.

A new railway station has been opened by a tram stop at Edinburgh Gateway and a park-and-ride station has opened at Ingliston on the outskirts of Edinburgh.

For all its runaway success, the new tram service's backstory is not without its bumps and lumps.

Reintroducing trams was first proposed in 1990. A city-wide tram service had closed in 1956. Electric trams had succeeded cable cars, which had operated on several of the hill routes in Edinburgh until 1922. Three tram routes were planned and 27 trams bought.

However, escalating costs and delays in construction, including the closure of Princes St - a major inner city shopping area - for almost a year while the tram lines and electric wiring were installed, caused a great deal of frustration among Edinburgh councillors, business owners and residents. 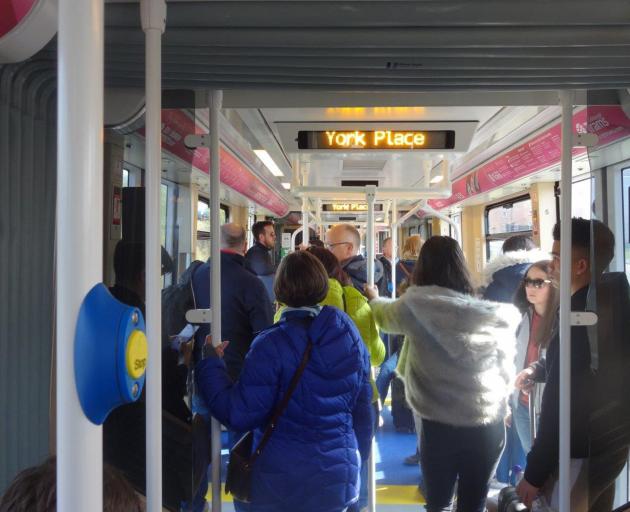 Passengers stand in a tram heading for York Pl, Edinburgh. Photo: Bill Campbell
The rising costs led to a reduction in the original three-route tram service to one 14km route. Only 17 of the 27 trams bought for the service have been used.

On the upside, tram patronage is ahead of predictions, leading to a decision to open an extension of the current tram route to run between York Pl and Leith, to the south of Edinburgh. This extension is planned to open in 2023.

Despite the difficulty of almost a year's closure of Princes St to traffic while the tramway was installed, the shops on Princes St were busy when the writer was in Edinburgh recently.

While Edinburgh's population of 482,000 is almost four times that of Dunedin, other smaller European cities have introduced modern tram systems, including several cities in France with commune populations less than Dunedin, including Caen (108,000), Mulhouse (112,000), Orleans (114,000) and Besancon (116,000), although the population of the surrounding metropolitan areas for each city is larger.

A tram service along Princes and George Sts in Dunedin, which are now freed from buses for several blocks, could fit in well with pedestrian development and a revival of shopping in the streets.

This has happened with Collins St in Melbourne, where only service and emergency vehicles are permitted in a street reserved for trams and pedestrians.

As more trams are built, the cost of new tramway systems is likely to come down.

Could this be an opportunity to establish a street tramway in Dunedin to complement the proposed High St cable car line?

Possibly is. This tram links in with park and ride. Ours would need to too.

Talking population numbers is totally misleading.
Edinburgh has a population density of 1800/ square Km, Dunedin is 38!
Building a tram system for commuters is not viable.
What could be viable is a fleet of small autonomous busses. No tracks nor overhead cables required. These could be trailed connecting the Uni , Nth Est Valley area to the CBD first, then expanded to St Kilda, St Clair, Caversham and beyond as the system proved its self.
Check this site out to see what others have been doing.
http://www.globalconstructionreview.com/trends/2018-year-autonomous-bus/

Would be great to have a tram system running on a large loop servicing all the hill suburbs, the university, the CBD warehouse precinct and the revitalized harbour.

Not with the current Council - that the Dunedin public voted for!