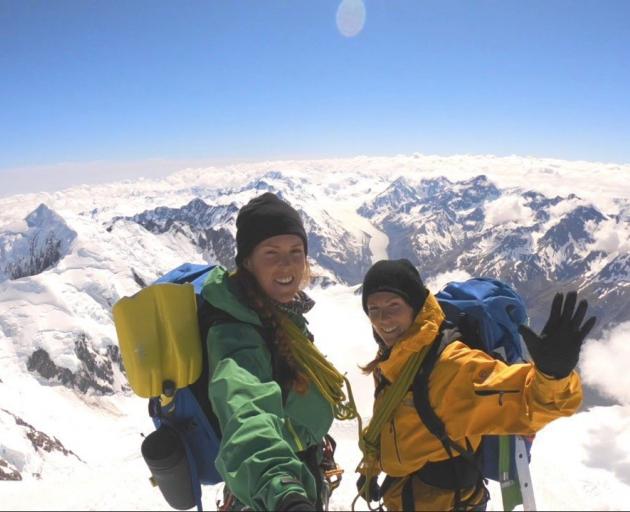 Amber and Serena Shine climb Mt Cook in New Zealand. PHOTOS: SUPPLIED
If you had to choose just one word to describe Amber and Serena Shine, ‘‘extraordinary’’ would be the most fitting. The 30-year-old twins from Waiuku didn’t just run a marathon, they did it on Mt Everest. They not only tried dogsledding, but raced 322km across the United States while doing it. If you thought surviving in the African wilderness for 21 days wasn’t hard enough, the duo did it naked for the hit television show Naked and Afraid. Now, they don’t just have the scars but also the book to prove it. Sarah Pollok sat down with the intrepid twins to
talk about their wildest stunts, unshakeable positivity and tips for living life to the fullest.

You’ve packed a lot of adventures into your 30 years. Which have been the most memorable?

Amber: They each stand out in their own way with pros and cons, but for me it would be working at a wildlife park in Bolivia. It was just such a crazy way of living; dirt floor, no power, no hot water, it didn’t have your normal luxuries, but I think that makes it more rewarding. It was also incredible working with pumas and jaguars and climbing with monkeys in the jungle.

Pumas really are lovely animals but just like any animal, they have their days. Amazon storms can come on pretty quickly and the cats get pretty wild, so there was a bit of a situation where one of the pumas turned on me. For the cat, it was probably playful but for me ... well, you’ve got this big wild animal gnawing on your arm.

Serena: For me one of the special ones would be climbing Mt Cook. We took two attempts and we wrote about the first one in the book. Unfortunately, the weather got way too warm, there was ice melting everywhere and risk of avalanche. A few years later we gave it another go and did summit that time. Both times were gruelling and had their own challenges but were very rewarding. I think there’s something about being on your own home turf. Climbing New Zealand’s tallest mountain, it’s that much closer when you’re a Kiwi.

There’s a fine balance between pushing yourself and knowing when to stop. Was it difficult to abandon the first attempt climbing Mt Cook?

Serena: It’s definitely a challenge to make that call. Often, you’ve put in weeks and weeks of training and the expense of flying down and everything that goes with it. You’ve just put so much into it, so it would be very easy to think ‘‘I can’t turn around, I’ve come too far, I’ve invested too much’’. But you have to be level-headed. The biggest thing in mind is to come back safe, so if we need to make that call and turn around then that’s just part of the adventure for us.

Amber: We have a saying, ‘‘nothing is worth risking everything for’’. Even though we do some crazy wild stuff, that’s always in our mind.

You came quite close to not making it home safely while in Australia.

Serena: Yeah! I was on a snowboarding trip, having a lot of fun on jumps and unfortunately one went wrong, as it sometimes can. This one went a little worse than I initially thought and I ended up breaking a couple of vertebrae. It was pretty scary when the doctors said I possibly couldn’t walk again, but I was really determined to recover. We actually set the goal of climbing Mt McKinley nine months later, which really put some charge into the recovery.

Amber: It was a bit of an outrageous timeframe. 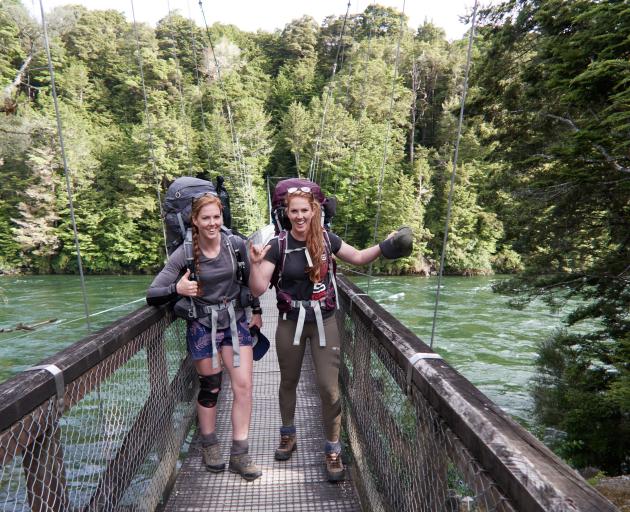 The Shine sisters walk the Kepler Track in New Zealand.
You both seem to have an unshakeable positivity, even during some extremely challenging or risky circumstances. Where did you learn to look on the bright side?

Amber: We’ve always had a positive attitude, so I guess a lot of it was encouraged by our family but we’ve certainly learnt over the years that, when you’re in a tough or challenging situation, a positive attitude can get you so much further. Positivity can also make a hard thing fun!

Serena: If we ever do think negatively, we’re quick to remind each other that it’s wasted energy. You may as well put that energy into thinking positively.

Has there ever been an adventure where you’ve thought ‘‘we’ve got ourselves in too deep’’?

Amber: We definitely have those moments, but I think we’re pretty cruisy when we do things because we have the skills and training to back it up. One time that does come to mind was going on the show Naked and Afraid where we had to survive in the African wilderness for 21 days. We came up against some pretty scary situations, with hyenas in the night, and a bull elephant, so it was definitely one of those times we thought ‘‘what are we doing?’’.

Serena: When we do something for the first time, we’ve probably faked the confidence.

Amber: Fake it till you make it.

Serena: Yeah, and then once you give it a go, you grow in confidence.

Amber: It’s all about pushing past that initial little hurdle. Then, once you’ve done it and can continue to do it, you build that confidence. I think it’s a big thing for people to realise confidence is something you can work on over time.

Amber Shine cares for a puma during her time in the Amazon.PHOTO: SUPPLIED
What was it like having the camera crew there during Naked and Afraid? Were you really left on your own?

Amber: The camera crew are there to make it as authentic as possible, so they silently followed us around during the day, being as discreet as possible while we went about trying to survive. At night they set up trail cameras and left, so it was all on us. It was actually pretty tough.

How do you balance getting outdoors and unplugging with managing your social media presence?

Serena: A lot of the time when we’re on adventures we don’t post live because we’re big on enjoying the moment and getting away from technology. Often we’ll get a quick snap and then post it later.

Amber: Although, social media has played a big part in helping us encourage people to get outdoors, and not just in extreme ways. It can be smelling the fresh air, going on a walk or a tramp through the bush, anything like that.

It’s so good to give things a go, but is there anything you wouldn’t do again?

Amber: One of the ones for me was sailing 25 days from Hawaii to San Francisco. It was an amazing adventure and I’m glad I did it but I did get terribly seasick. I’d been working as a scuba dive master in Hawaii for six months and was so confident I didn’t get seasick that I didn’t even take seasickness tablets or anything like that. Spending nearly a month in the middle of the ocean, on some of the roughest seas I’ve ever seen, makes me think I probably would not do that again.

After decades of wild escapades, how are you finding Auckland’s lockdown?

Serena: It’s been pretty tough, especially with our business closed down. Instead of being off on adventures, we’ve both pivoted and we’re both fortunate enough to live rurally so we’ve got a whole lot of projects on the go in the shed.

Amber: We’ve both got sheds and we both probably spend about half our time in there making things. Serena does a bit of portrait painting and I’ve been working on a concrete bathtub. I saw these really cool ones but the price was outrageous so I thought I’d give it a go and try to make one myself. So far, it’s going well but I’m yet to test if it holds water ... 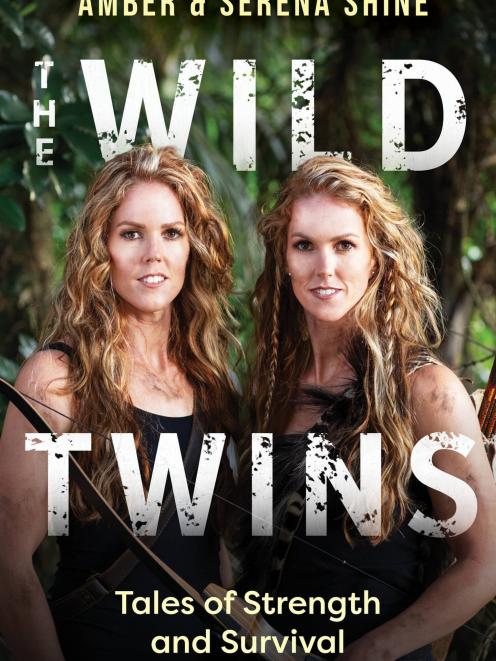 The book: The Wild Twins: Tales of Strength and Survival. Harper Collins, RRP $39.99.
Do you have any plans for when we can freely travel internationally?

Amber: We certainly have loads of plans but with restrictions. We want to make the most of New Zealand. We’ve realised from all of our travel that New Zealand has some of the most amazing outdoor adventures in the whole world anyway. There are still heaps of little places to explore.

What is your hope for your new book The Wild Twins: Tales of Strength and Survival?

Amber: To inspire people to just give things a go, get out there and do it.

Serena: You can learn so much through experience. Whether it all goes right or it all goes wrong, you learn a bunch either way. — The New Zealand Herald