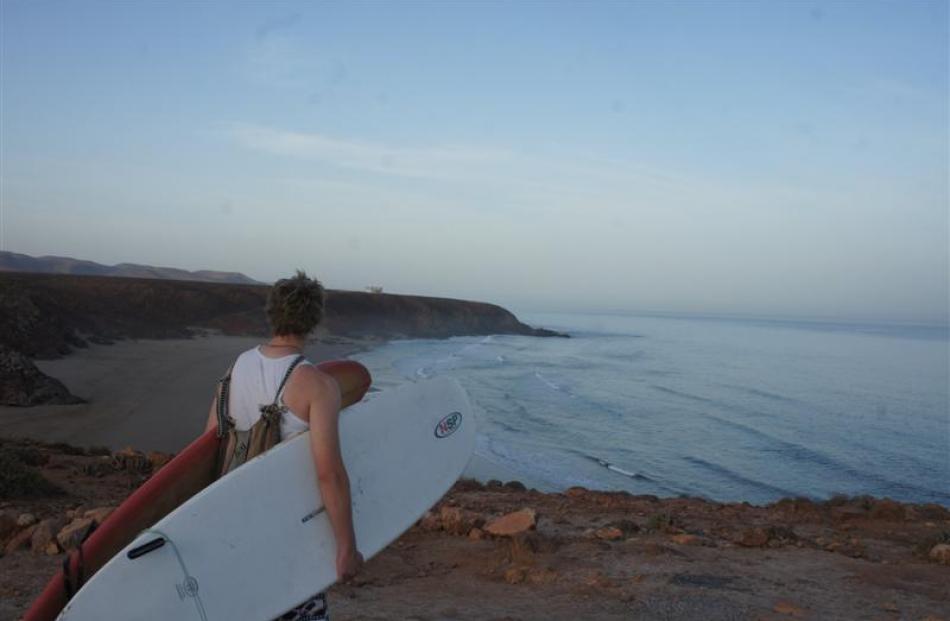 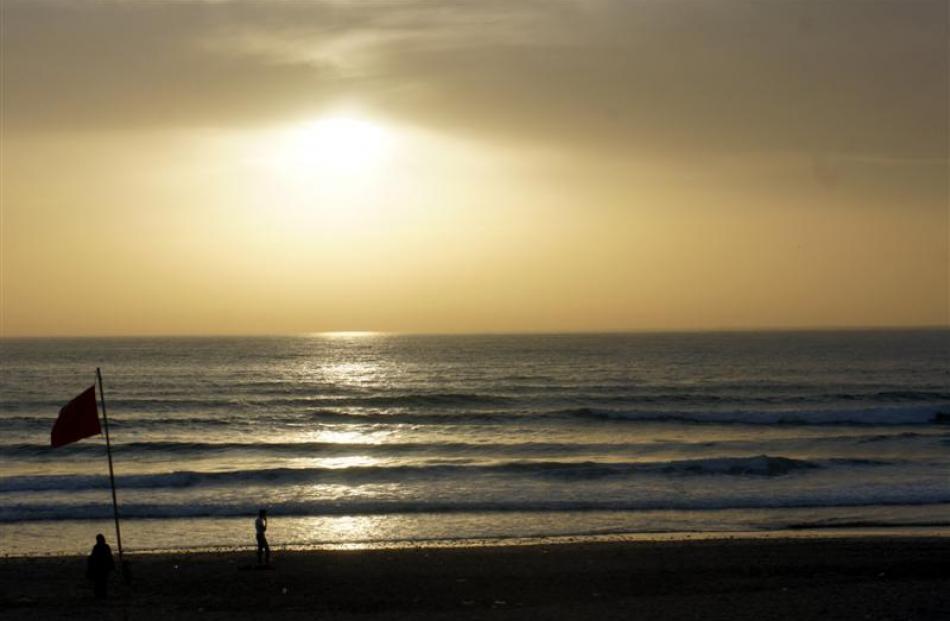 The sun sets over surf at Dar Najmat beach. 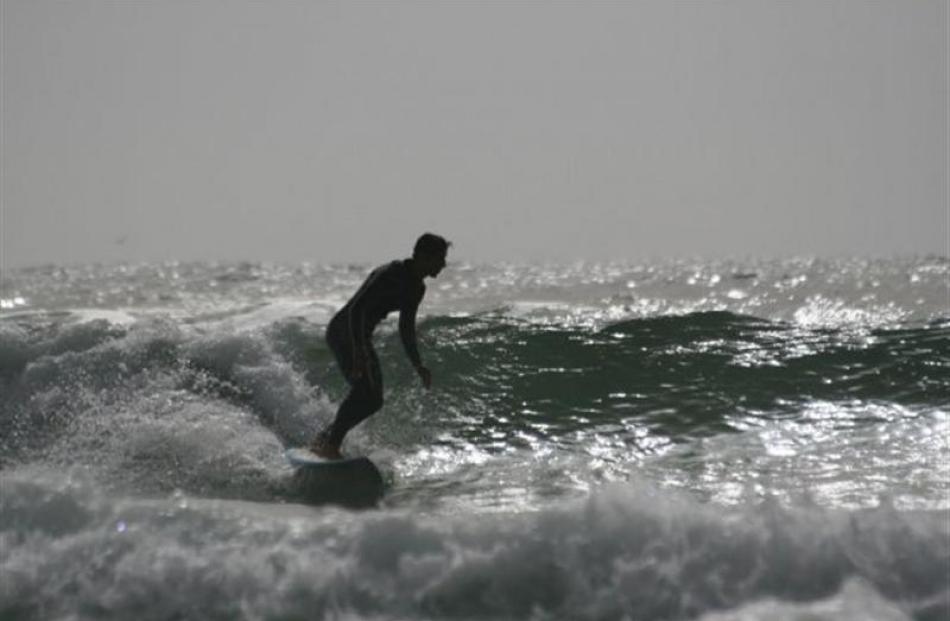 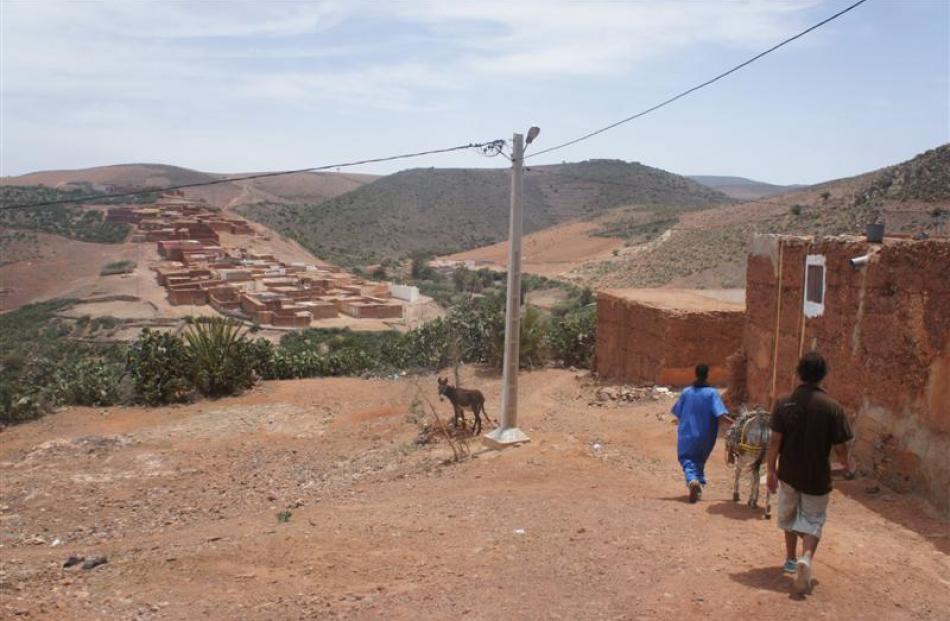 Trekking to a Berber village in the hills behind Mirleft. 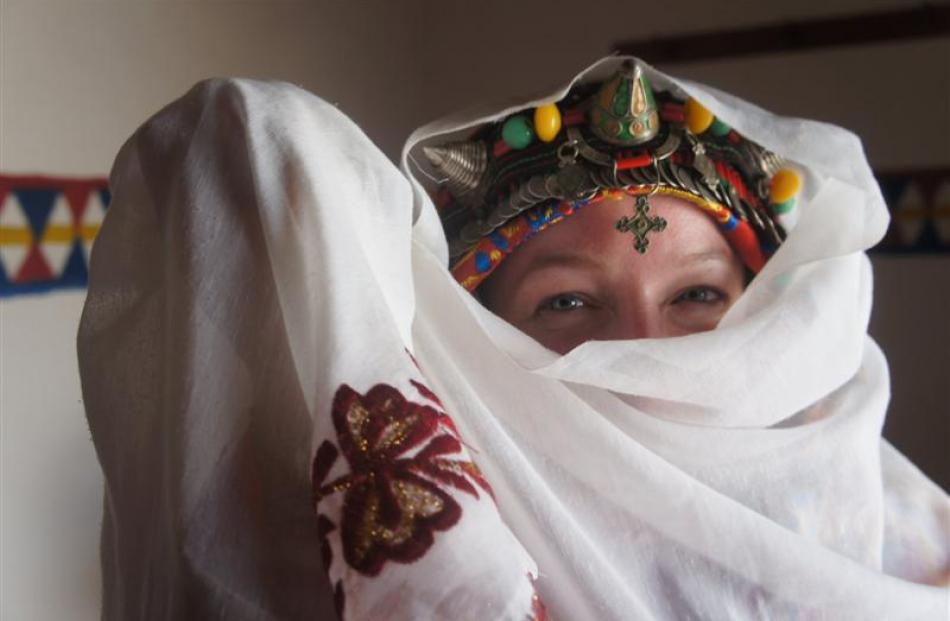 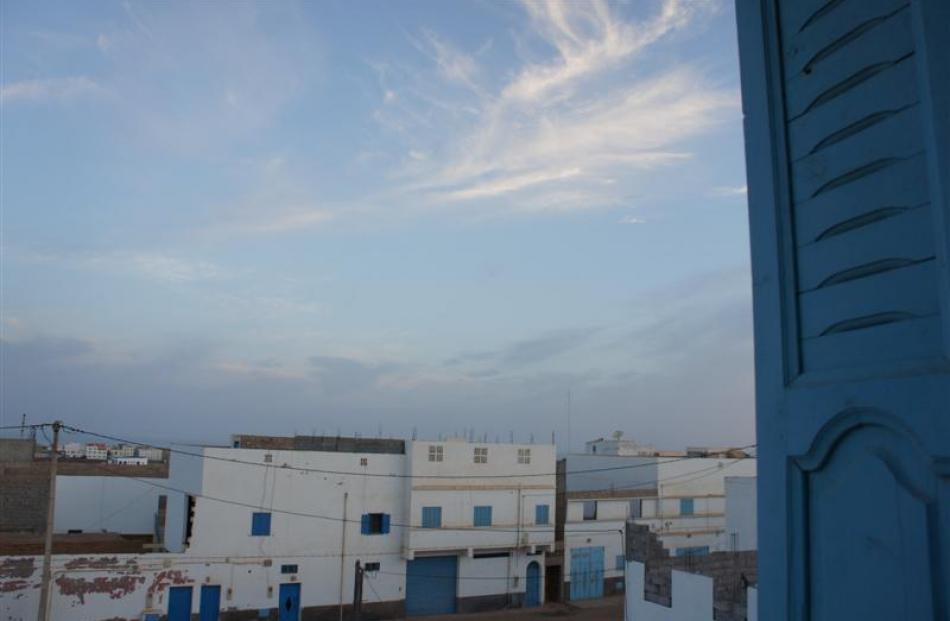 
An ill wind sometimes brings about the best in life. This wind in particular - a querulous westerly - blew in the week our group of six boarders was due to arrive in the Moroccan surf village of Taghazout, rendering the ocean flatter than local patisserie slab loaves.

Taghazout, hippy haven of the '60s, centre of a thriving surf tourism industry and - handily, we had thought - a short Kombi van ride away from our point of arrival, Agadir, was not meant to be.

However, due to the multi-faceted nature of Morocco's wandering coastline, the featureless glass of Taghazout was bound to be made up for somewhere else.

The opportunity presented itself in the form of Mirleft - a tiny coastal town several hours south of Agadir, which boasts a wider population of 8000 people, possibly more donkeys and a cornucopia of empty beaches.

For most, the coastal transport of choice is the inter-city grand taxi; typically part of an ageing fleet of Mercedes which have no air conditioning and a single window crank handle, controlled judiciously by the driver. Fares are cheap provided you follow Moroccan custom and allow the car to collect its full complement of six passengers; four across the back seat and two up front. At this point you buckle your imaginary seat belt and try to forget that the death toll for this particular stretch of highway sits at 20 people per day.

Shortly after the scrubby desert stretching from Agadir turns into scorched hills, the Atlantic Ocean shows its face, immense, glittering and crashing at the foot of crumbling cliffs and golden sand beaches.

Mirleft is a step back from Agadir's whirlwind of activity and the touts who have cottoned on to Taghazout's tourist dollars. Despite the rubbish lying where it drops on the ground, a seemingly ubiquitous Moroccan habit, the town is charming, with stone houses adorned with royal blue shutters and trimmings and brightly garbed Muslim women unconcernedly going about their daily affairs. While it has an almost complete lack of tourist-trap trappings, there are still internet cafes, several hotels, small grocers and a traditional open-air market, or souk.

You will see, but most likely not recognise, tourists, as Mirleft is known really only to Moroccan holidaymakers or knowledgeable surfers who return again and again.

On our arrival, we donned wetsuits and slipped into the sea with the sun rapidly sinking into medium-sized waves.

People in various forms of undress, in accordance with religious beliefs, could be spotted playing football and splashing about in the shallows of Dar Najmat beach or clambering up the rock pinnacle which splits the bay in two, forming a nice left-hand break completely ours for the taking.

When finally the light slipped from the sky, our mixture of whitewash warriors and more experienced surfers reluctantly relinquished the consistent array of waves. Only the promise of a cool sleep on the roof of our rented apartment and chicken tagine with couscous managed to coax us out.

Most days began the same; being woken by prayer calls and again by the first light, loading the car with surfboards and driving off to the day's beach of choice.

The main township of Mirleft is close enough to Dar Najmat beach to walk in about 20 minutes, but there are so many surfing spots nearby it's worth having a car to take advantage of wherever the surf is best each day - whether that be under the cliffs south at Lagzira Beach, a short walk down into the isolated bay of Plage Sauvage (wild beach), which in summer hosts a surf camp, or the vast expanse of sand at Imin Torga, where goats scamper among beach umbrellas.

Morocco has gained a reputation as a year-round surfing destination and it is well-deserved, whether you're there for the more laid-back small-to-medium waves of summer (April to October), or you're joining the winter crowds drawn by 3m-plus swells.

A spring arrival works perfectly - you can surf deserted waves in the mornings and evenings and, following in the shoes of the locals, retreat into the cool shade of the apartment during the angry midday sun.

Only in the last few days of our stay did the waves drop off, and even then there was plenty of exploring to do off the water.

The Berber people were the original inhabitants of Morocco before Arabic incursions began in the 7th century and many still inhabit the hills and coastline of the country, living much in the way they always have done - livelihoods of subsistence farming, Argan oil production and fishing.

An hour after awkwardly leaping on to the backs of our steeds, we arrived at a small Berber village in the hills via a valley of cacti, past ruined French fortifications and dirt tracks steep enough to threaten tumbling off the front of our donkeys.

Our hosts - an imam (Islamic priest) with an enormous, if not entirely complete, smile - and his wife greeted us with mint tea, thrice poured and eye-wateringly sweet, before giving us a tour of the village and a massive communal tagine of delicious couscous and chicken. Our guides interpreted for us, before a question about our hosts' wedding prompted the hostess to bring out her wedding photos and adorn our female companions in her lavish celebration dress.

A side-trip via a sunset drive south to the cliff-top town of Sidi Ifni provided the opportunity to sample another Moroccan custom, the shisha or flavoured water-pipe smoked in cool rooms full of comfortable chairs.

If the day's surfing was not enough to work up an appetite for another must-try dish - the sweet chicken, spice and pastry concoction known as a pastilla - then a session sharing the smooth smoke of the fruit tobacco is sure to do the trick.

It was not until right at the very end of our trip we ended up in Taghazout, where the sea remained resolutely flat.

Dreadlocks, pale skin and persistent touts jostled for attention alongside now incongruous English signs and a noticeable hike in prices for goods and services. Again the welcome of Mirleft began beckoning.

Getting there: International flights to Al Massia Airport, in Agadir, and Marrakech and Casablanca to the northeast. Intercity transport by grand taxis and buses, or private car hire.

Boards and wetsuits are also available for rent from Agadir and Taghazout.

Best time to go: Between October and April for large winter swells and April to October for small-medium waves in summer, although avoid the peak tourist season and the hottest temperatures between July and August.