Lake Matheson is famous for its reflected views. PHOTOS: WAYNE MARTIN
Wayne Martin rediscovers the beauty of the wild West Coast and finds out there is still life in the region despite Covid-19 and the weather’s best efforts.

The Gates of Haast. They sound like the guardians of a mythical land, and more than 40 years after my first trip across that narrow one-lane bridge, it feels not far from the truth. Perhaps it was the terror of that first trip that stayed with me; riding shotgun in a Mini Cooper driven by a friend whose rally-driving ambitions far surpassed his skills.

Back then the road, which followed a traditional route used by Maori crossing the Main Divide, was less than 10 years old. I remember it as narrow, loose-gravelled and precipitous, but it is an easy drive now, with the last chipseal laid down in 1995.

From home base in Wanaka, we are following State Highway 6 to Franz Josef. New Zealand was soon to reopen to the world, and with the Glacier Country economy one of many devastated by border closures, we want to explore the area while it is still quiet. 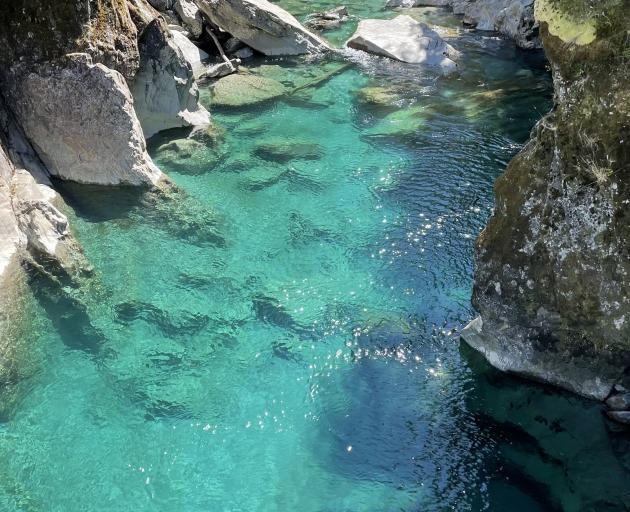 There is a short walk to the pristine Blue Pools.
The road to Makarora draws us through sweeping blue views of first Lake Hawea on the right, then Lake Wanaka on the left. Gradually, the hallmarks of the West Coast close around us; tangled rainforest, ferns, flax and fallen logs, tumbling streams and waterfalls, bush-clad hills and soaring mountains.

To a lifelong east-coaster it’s an alien world where the rivers run in the wrong direction and the sand looks like black pepper. Tall, lush greenery displaces the flat tussocklands of more familiar places like the Mackenzie Country and the Maniototo, while strange, wind-tortured trees bend permanently from the wild Tasman shore.

Doc-signed trails at regular intervals remind us we are in prime tramping country. We answer their call with short walks to the pristine Blue Pools of the upper Makarora, to Fantail Falls and Thunder Creek Falls where the roar of the water seems amplified in the gorge. On the coast side we rest on the shores of Lake Paringa, an alpine oasis hidden in a basin of forested hills. 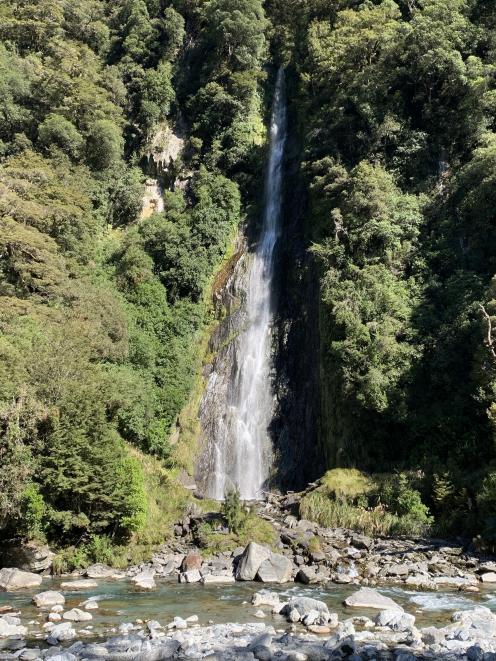 Thunder Creek Falls.
Franz Josef is a near ghost-town of empty car parks, guiding businesses and discounted souvenir shops. But there is life in many of the bars and restaurants, and a smattering of guests at Aspen Court Motel, where our room is generous, modern and inexpensive.

Heading to the glacier car park we cross the Waiho River, which is low today, but a destructive force when in flood, with slips, bridge failures and road closures an ever-increasing hazard.

At the car park, two other cars are parked in a facility built for several hundred. Six walks of varying lengths and gradients beckon. We opt for the 20-minute Sentinel Rock trail, which promises high reward-to-effort. From the lookout it’s clear how much the glacier has retreated since I was last here. Information panels chart the progress of the ice. The first is an 1865 watercolour showing a great frozen river reaching almost to the valley floor, exploding in shards of ice like a tsunami frozen in time. One panel projects how much the glacier will shrink by 2100. Soberingly, the scene before us shows the ice is already at that level. It feels like we are staring into the very face of climate change. 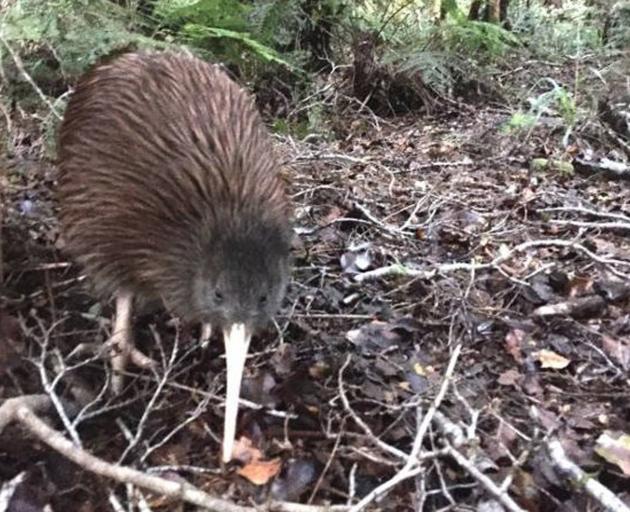 Haast kiwi. PHOTO: DOC
Back in town, we visit the West Coast Wildlife Centre, the largest kiwi hatchery in the South Island. Two juvenile rowi forage among the ferns, logs and leaf-litter of their special nocturnal forest. Soft-feathered, beady-eyed and impossibly cute, they are the flesh and blood of our national identity. These birds will be released into the wild at about 1 year old, when they will weigh about a kilogram. With only about 600 remaining in the wild (340 of which were reared here), rowi are the world’s rarest kiwi. The Wildlife Centre, in partnership with Doc, has led the fight to bring this species, and the equally endangered Haast tokoeka, back from the edge of extinction. The excellent glacier exhibit and live tuatara display further highlight the centre’s theme of preserving the rare and vulnerable in Aotearoa’s natural world.

Also known as the Okarito brown kiwi, rowi live in the surrounding lowland forests of that area. The Okarito Lagoon is a 25-minute drive north of Franz, and we are keen to see it in the last of the sun. As well as being the last natural habitat of rowi, Okarito is the domain of the late Booker Prize winner Keri Hulme, a colony of white herons and thirty or so deep-dyed Coasters.

An old timber shed, now an information centre, perches over the water at the end of a short jetty. Its weatherboards glow silver in the late sun. Derelict marine piles jut from the water, while beyond spread 3000ha of shallow tidal flats, the largest natural wetland in New Zealand.

At nearby Okarito Beach, three fishermen have cast their lines. The surf is surprisingly turbulent on such a still day. After a few minutes, a line tugs, stirring a life-and-death struggle between a fisherman and an unseen opponent. After a few minutes, he reels in a muscular four-foot-long grey shark that he tells us is a rig, common in New Zealand’s coastal waters and a staple of fish and chip shops.

A short walk from our motel, Alice May’s gastropub proves ideal for dinner, with a down-to-earth menu and a good selection of craft beers on tap. We sit outdoors on a generous deck in the warm evening. After a big day, the local brew (also called Alice May’s) hits the spot, while the slow-braised beef cheeks in a red wine sauce are as tender as a moonlit night.

A collection of newspaper cuttings printed on the placemats tell the remarkable tale of the restaurant’s namesake. In 1915, pantry maid Alice May Parkinson shot her lover four times in a classic case of ‘‘hell hath no fury’’. The restaurant is owned by one of Alice’s eight granddaughters, Jennie O’Loughlin. 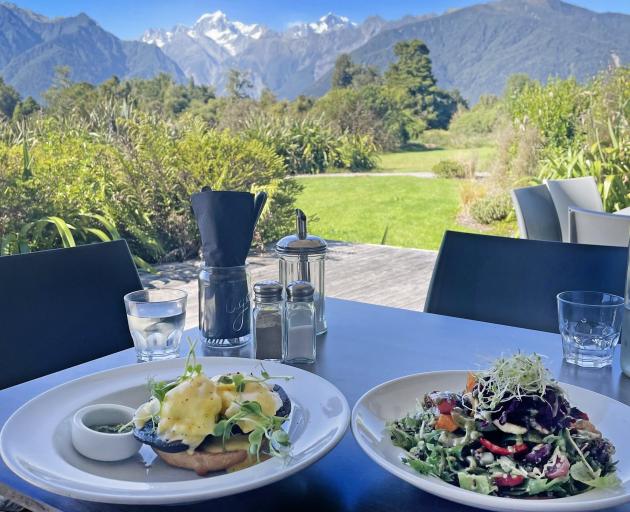 Mushroom eggs benedict and grilled vegetable salad at Matheson Cafe.
The morning again dawns warm and fine, and on the way home we stop at the Lake Matheson visitors’ centre and cafe, five minutes’ drive west of Fox Glacier township. With the homeward journey ahead of us we opt for a short out-and-back walk to the Jetty Viewpoint in search of the lake’s famous reflected views. The trail climbs gradually through dense native bush crowned by ancient stands of rimu, kahikatea and matai. The water is dark and flat, and its reflection of Mt Tasman and Mt Cook is the stuff of classic New Zealand postcards.

The ceaseless beauty and autumn warmth persuade us to walk the full 90-minute loop. The names of other lookouts, View of View, and Reflection Island, give the flavour of a walk that must rank with New Zealand’s finest.

At the Matheson Cafe, the mushroom eggs benedict and grilled vegetable salad are as world class as the view from the deck, where we devour both the food and the alpine glory spread before us.

With the challenges of border closures, glacier retreat and floods, this region deserves a break. But like the wildlife it seeks to preserve, it is a taonga that will endure. We will be back before long, with the fond hope of having to compete for parking spots and restaurant tables next time. 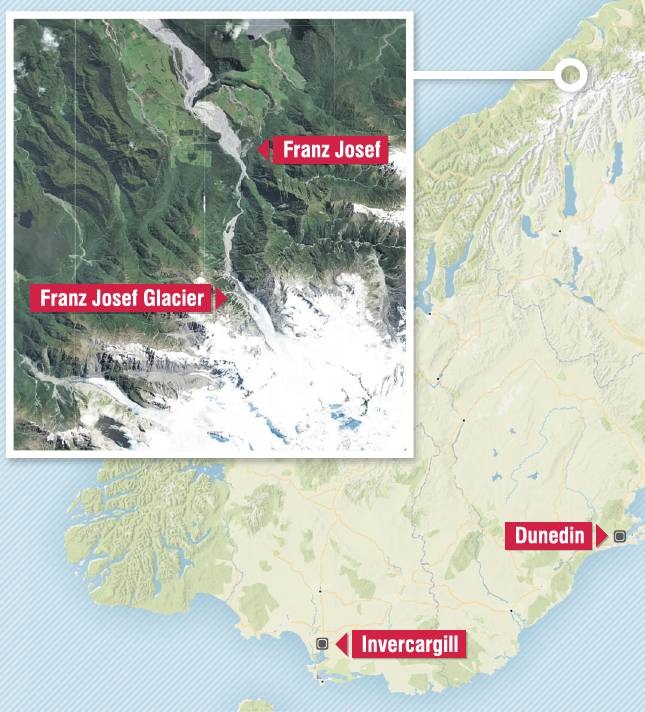