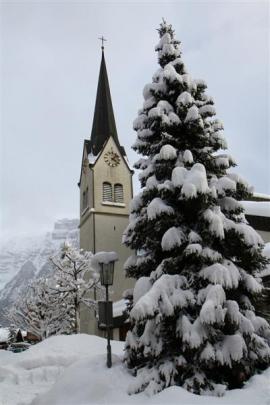 The Pfarrkirche church, in Mellau, looks every bit the Christmas card, surrounded by snow. Photos by Jeff Kavanagh. 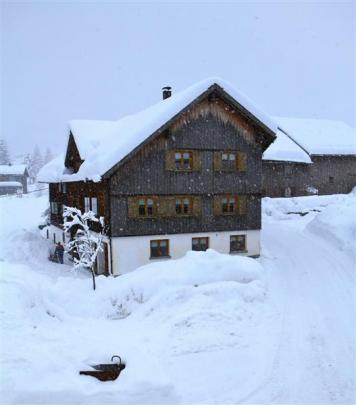 A Mellau farmhouse wears a blanket of snow. 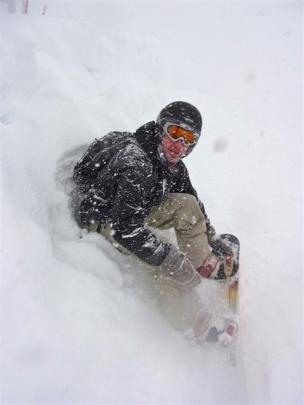 Mellau provides 100-plus kilometres of piste, that during Jeff Kavanagh's visit was covered in powder that accumulated from knee to waist to belly deep. 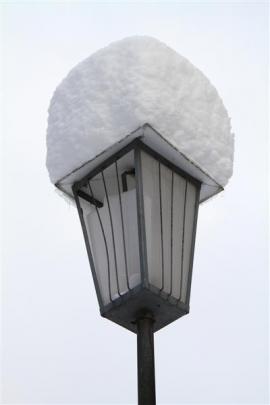 Snow on a street lamp.

The ski season may have wound up here but that only means it is about to get under way somewhere else. Jeff Kavanagh reports from Austria.

There's comfort to be found sharing your lodgings with a small herd of goats.

Lying in bed at night knowing that, a few flights down, a nanny and three kids are also curled up, perhaps having a few lazy chews on an old Christmas tree hanging in their pen, instils in me both a sense of communality with our fellow beasts and a better appreciation of my surroundings.

The hotel's nine other paying guests, my girlfriend and I, and the goats are staying in a converted 19th-century farmhouse in the Austrian village of Mellau for more or less the same reasons: it's the middle of winter, we're 700m above sea level on the northwestern edge of the Alps, and everything outside is coated in thick swathes of snow.

And while the white fluffy stuff is keeping our horned friends off the slopes, it's why we're up at seven most mornings to pull on thermal underwear and thick socks, munch down a generous breakfast of bread rolls, eggs, cheese, ham and hot coffee, and lug our snowboards 10 minutes up the road to the village's gondola.

Once there, it's a near silent glide another 700 vertical metres up one side of a narrow valley and through snow-laden firs to a T-bar lift and the start of the Damuls-Mellau ski field.

On our morning stomps through the snow that falls almost constantly for the week we're in the little one-church village, we catch whiffs of cattle housed in cellars and barns and see farmers forking in hay and shovelling out what becomes of it.

There's also the occasional unmistakable tang of pigsty, although we see little evidence of any pigs themselves other than what's offered in many of the village's hotels and restaurants.

Chatting with Dolores Siegl, the amiable, late 30-something owner of our hotel, one evening as, weary from a long day riding some of the mountain's 100-plus kilometres of piste, we refuel our bodies with venison ragout and egg noodles, we learn that the goats are owned by the hotel's previous proprietor, who intends to make cheese for the hotel from their milk.

Dressed in a dirndl - a frilly peasant dress commonly worn over the border in Bavaria during Oktoberfest, Dolores also tells us that she and her husband, Herwig, have only been running Naze's Hus since they renovated the hotel in December last year.

It's been going so well, she says, they've had to turn away hundreds of bookings for the coming year.

Warm and engaging, the couple are natural hosts.

The following morning, before we head up the mountain, Herwig, a 50-year-old ex-logging truck driver with arms as thick as wall joists, explains that the hotel was refurbished with Swiss pine.

In his sing-songy German, he says it's a material that has been proven to lower heart activity and improve sleep in those who live in rooms made of it.

With an expectant look, he asks how we slept.

Not wanting to disappoint him, we reply ''Sehr gut, danke'', despite both having picked up coughs that woke us during the night.

Health benefits or otherwise, there's little doubt that Naze's Hus is a lovely place to stay.

An elegant building situated in the middle of Mellau and within an easy wander of the gondola, a small supermarket and the rest of the 1300 inhabitant-strong village's facilities, its shuttered windows are set into a traditional facade of overlapping teardrop-shaped wooden shingles that insulate the hotel and cleverly let air in and expel moisture at the same time.

Inside, its restaurant offers cosy respite from the falling snow outside, its two small wood-panelled rooms interrupted by a ceramic-tiled fireplace that warms our backs during breakfast and the evenings that we eat there.

The €100 ($NZ163) we pay a night only includes breakfast, and on the nights we don't dine in the hotel, we venture out into the snow to explore what else the village has to offer.

The best, we discover, is the warmly lit and welcoming Zur Mchle.

It is tucked away down an alleyway and, misreading our map, we spend 20 minutes walking along the thin, icy verge separating one of the village's two rivers and the main road through the valley before realising our mistake.

Once settled at our table, we take a welcome break from the meat-fest of ragouts, pork schnitzels and beef goulashes served up in almost every other establishment in the village and on the mountain and order large plates of salmon with potatoes and spinach.

Given how small it is, there's not much in the way of apres ski entertainment in Mellau other than the Kanis Stadl beer hall across the road from the gondola and the ''Bear Cave'' bar in the basement of one of the village's larger hotels.

We pop into both places during the course of the week but stay only for a quick drink in each, dissuaded from ordering a second by the cigarette smoke and the cheesy Austrian and German party anthems throbbing out of the bars' stereo systems.

It's no great shame, as we didn't come to Mellau, in the west of Austria, just over the border from Switzerland and Liechtenstein, for the nightlife.

Tired from our days carving through powder that accumulates from knee to waist to belly deep by the time we leave, we're mostly content to have a decent sweat in Naze's Hus' little sauna before grabbing a pizza from the '70s-style Pizzera da Sandro or tucking into a schnitzel and salad from the cheap and cheerful Hotel Adler, both of which are two minutes' walk from our hotel.

Regardless of where we eat, however, we inevitably find ourselves looking in on the goats downstairs before going to bed.

Giving them a pat and scratch behind the ears may be as exciting as our evenings get, but considering the exertions of the days, we're happy with simple pleasures and the promise of a good night's sleep.

• Former Dunedin man Jeff Kavanagh is a travel writer based in Germany.