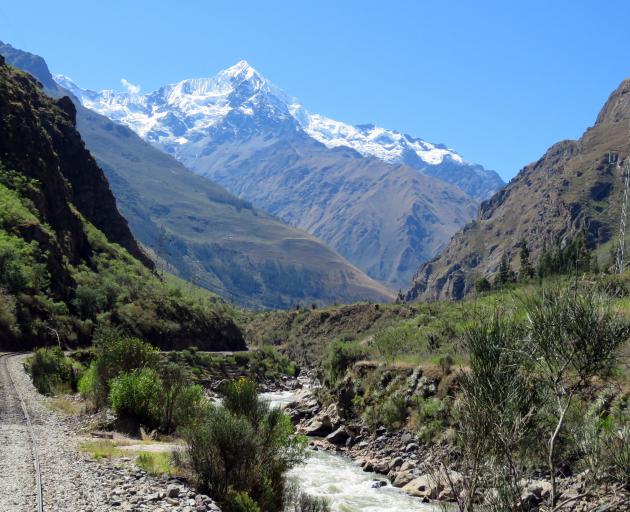 Mt Veronica (or Wayna Willka) in the distance and the rocky Urubamba River alongside the train. PHOTO: JUSTINE TYERMAN
Justine Tyerman invokes a handy clause which allows her to indulge to the maximum on a luxury train journey to Machu Picchu in Peru.

I seldom refuse Champagne, but the tall glass with lively pale gold bubbles was offered to me well before the sun had approached any yardarms in the vicinity. In fact Inti (the Inca word for the sun god), had barely awoken. However, I assessed the situation thoroughly and applied a special exemption clause (SEC) - reserved for when an experience is extraordinary and unlikely to ever be repeated. I applied the same handy clause to the delectable canapes circulating on silver trays ... soon after breakfast. I was bound for Machu Picchu on Great Train Journeys' ultra-luxurious Belmond Hiram Bingham and the scenario at Poroy train station, northwest of Cusco, Peru, demanded such self-indulgent behaviour.

We arrived at the station well before the departure time in order to fully absorb the atmosphere of the occasion. A troupe of exuberant young performers were dancing and playing joyful upbeat drum, flute and guitar music. The swirling of the girls' brightly-coloured full skirts against the backdrop of the train in its shiny navy blue and gold livery ramped up the level of excitement. They also carried out sacred Inca rites to thank Pachamama, Mother Earth, a goddess revered by the indigenous people of the Andes, for her bounty.

The train on a bend on the way to Machu Picchu.
By the time I boarded the train and set off on the three-hour, 20-minute journey through the Sacred Valley of the Incas to Aguas Calientes at the foot of Machu Picchu, my mood was as effervescent as the bubbles in my glass. 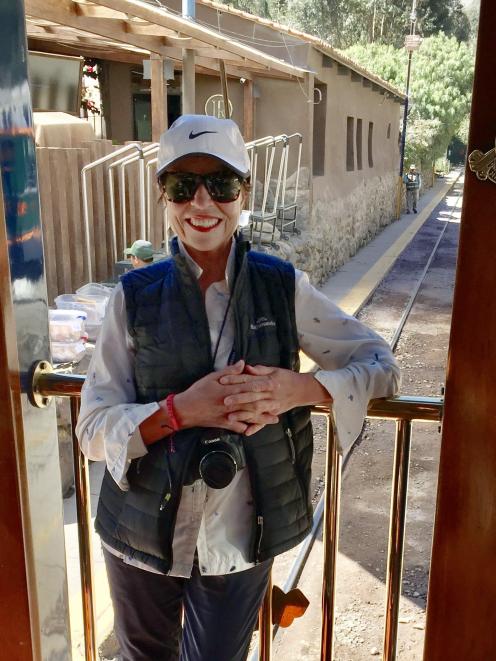 Our foursome was seated at a table in a sumptuous 1920s-Pullman-style restaurant carriage furnished in reds and golds with brass and polished wood reminiscent of the Orient Express.

A note at the top of the lunch menu paid tribute to Pachamama for the ingredients used in the dishes - trout, avocado, grains, tubers and corn from the valleys and tropical fruit from the jungle at Quillabamba, 37km from Machu Picchu. The products are grown on small organic family farms, while the pink salt used on the train is from mines of Maras and Pichingoto which date back to the beginning of the Inca Empire.

It was heartening to know that the communities we were passing through benefited from the presence of the train. 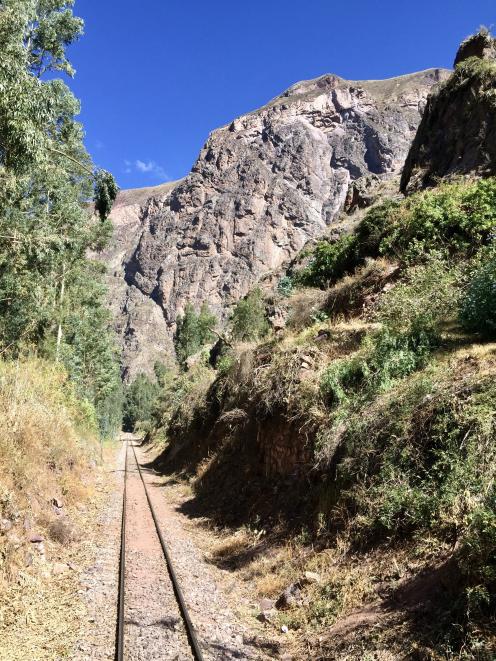 The strangely-hypnotic railway line stretching out behind us in the Sacred Valley.
The ambience and service in the dining carriage were superb and the surroundings in the lounge were salubrious and extraordinarily comfortable, but I couldn't bear to be inside on such a perfect winter day. As soon as it was polite to do so, I made a beeline for the open air observation car at the rear of the train. Apart from lunch - tasty Angus beef skewers with native potatoes, grilled Sacred Valley corn, and a salad of palm heart, asparagus and aji limo chilli pepper, followed by banana passionfruit mousse - I spent the entire journey outside in the sunshine, drinking in the landscape ... and the odd cocktail from the bar conveniently located right beside the observation car.

It was not the most restful of experiences, lurching from side to side trying to catch the best view and camera angles, but the vista was intoxicating and left me spellbound. Whenever the train negotiated a corner, a form of hysteria seemed to overtake the passengers, who rushed to the observation car, jostling to photograph the locomotive and carriages snaking around the bend. Some of my photos look like I was travelling with a many-armed monster.

I followed our route to Machu Picchu with the aid of a handy booklet that provided excellent information about the villages and surrounding countryside.

Leaving Cusco, the train passed through Izcuchaca and the patchwork plains of Anta, known as "the breadbasket of Cusco'' because of the grains, corn and livestock grown there. I waved to ladies wearing top hats and bright full skirts with blankets draped around their shoulders, for carrying babies, produce or both. They were working in the fields or leading sheep and cattle on ropes. One lady was knitting while watching her tethered sheep as they grazed. She smiled and waved back enthusiastically.

The interaction made me feel a little less like an intruder passing indifferently through their lives. 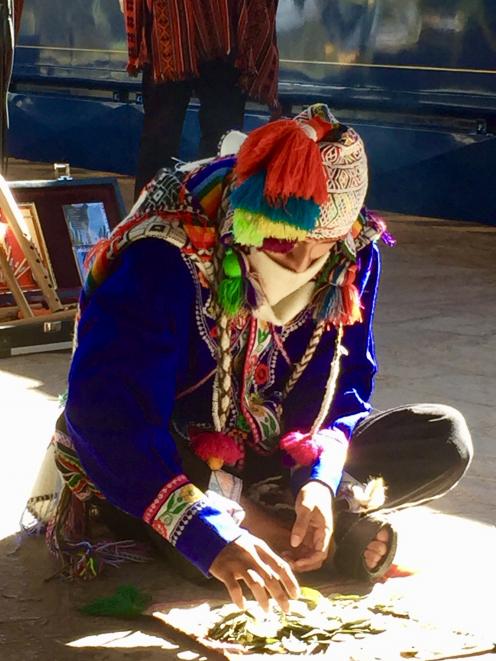 Sacred Inca rites to thank Pachamama, Mother Earth, at Poroy Station in Cusco.
After travelling through the ancient town of Huarocondo which lived up to its name as "the capital of roast pork (lechon)'', the train entered the deep Pomatales Gorge, descending 400m in less than 5km, before trundling through the small community of Pachar.

The landscape was astonishing - deep ravines with perpendicular red cliffs towering high on either side of the train, gorges foaming with swiftly-flowing rivers, hillsides striated with ancient stone-walled terraces, tall cacti with fierce spikes, dusty adobe villages with terracotta tiled roofs ... and the strangely-hypnotic railway line stretching out behind us.

The resident trio, Sabor Sentimiento, was playing my favourite Eagles' songs, accompanied by the occasional blast of the train horn, and the barman was turning out cocktails so fast his hands were a blur. The Bloody Mary he whipped up for me was superb ... and oh so zesty! Cocktails in the middle of the day? No problema. I trotted out my indispensable SEC again.

The Belmond Hiram Bingham stopped at busy Ollantaytambo Station (2787m), the half-way point between Poroy and Aguas Calientes where passengers embarked and disembarked from other trains. On the hillside just beyond the station, I spotted the massive Inca fortress with large stone terraces I had just read about in the booklet. Travelling in the Sacred Valley, you soon realise that while Machu Picchu is the most famous, it's only one of many Inca treasures in the valley.

Soon after, the highest peak in the Cordillera Urubamba, the magnificent pyramid-shaped Mt Veronica (or Wayna Willka), came into view. I couldn't take my eyes off the snowy peak with its silver glaciers gleaming in the bright morning sunshine. It was tricky because I also wanted to follow the course of the rocky Urubamba River in the gorge below.

At Piscacucho, I watched a group of hardy hikers with heavy packs setting off on the 42km Camino Inca. I was full of admiration. The route ascends to 4200m, following an ancient stone road built by the Incas from Cusco to Machu Picchu. Despite being a keen tramper, I doubt I would have managed the four-day trail at such high altitude.

The troupe of exuberant young musicians at Poroy Station in Cusco. PHOTOS: JUSTINE TYERMAN
Qorihuayrachina, 88km into the trip, is another area rich in archaeological sites, including a mountain-top citadel that was home to 1000 people at the height of the Inca Empire.

The landscape changed from Andean highlands to lush green cloud forest and jungle at Pampaccawa, after which the train passed through Winaywayna, named for its abundance of orchids. Peru boasts 3000 species of orchid, of which 400 can be found in the Machu Picchu Historic Sanctuary.

After 112km, the train reached its final destination at Aguas Calientes (2040m), where we disembarked and battled our way through a crowded market and boarded a coach to take us up the narrow, zig-zag road to Machu Picchu.

After the sensory overload of Machu Picchu, time to sit and reflect over high tea at Belmond Sanctuary Lodge just a few steps from the entrance to the citadel was a welcome respite.

The lodge is the ideal place to stay after visiting Machu Picchu, but it is booked out well in advance, so we returned by train to our lovely hotel in Cusco, the Belmond Monasterio, a former 16th-century monastery.

Red adobe walls surround a cemetery en route to Machu Picchu.
En route back to Cusco, Sabor Sentimiento, the trio who entertained us with background music on the trip to Machu Picchu earlier in the day, stepped up the tempo. The bar car turned into a dance floor with passengers singing along to well-known hits and playing Peruvian gourd maracas and tambourines.

It was huge fun, partying with a trainload of merry strangers, as the train chugged on through the dark night. Having shared an experience of a lifetime at Machu Picchu, the usual politeness and restraint between strangers did not seem to apply. Everyone was on a high. The atmosphere was convivial in the extreme. Even some of our more staid travel companions were overflowing with bonhomie.

The only time we sat down was to consume a sensational four-course a la carte dinner served in the comparatively quiet dining car. Grilled paiche fish with fava bean puree and crispy rice wafers; salad with Sacred Valley greens, duck prosciutto, passionfruit and sherry vinaigrette; cream of green asparagus soup, with zucchini and confit cherry tomatoes; and Quillabamba coffee cheesecake with sesame caramel. After working up an appetite hiking around Machu Picchu and playing the maracas on the dance floor, I managed to consume every last crumb.

Our beaming, attentive waiters kept our glasses topped up with reds, whites, bubblies, cocktails ... whatever the senoras desired.

I had quite forgotten our guide's advice about conduct at high altitude: eat, drink alcohol and exercise in moderation - but all was well. No ill-effects. I was exempt!

As the train pulled in to Poroy Station, I was reluctant to disembark. There was an undeniable magic about the experience and I didn't want it to end. It had been necessary to apply the SEC quite frequently throughout that day but that was perfectly acceptable - I doubted I would ever pass this way again. Such perfection is a one-off.

* Justine Tyerman travelled to Machu Picchu with Great Train Journeys on the Belmond Hiram Bingham launched in 2003 to transport passengers from Cusco to Machu Picchu in style and luxury. Gourmet cuisine, fine wines and superb service are a feature of this exceptional journey.

* Great Train Journeys is one of Rail Europe’s portfolio of luxury rail experiences around the world. Rail Europe is the world’s leading and most trusted distributor of rail tickets, passes and scenic rail journeys. Call Auckland 09 377 5420 for more information.

* Machu Picchu was declared a UNESCO World Heritage site in 1983 and voted one of the New Seven Wonders of the World in a worldwide Internet poll in 2007.

* Accommodation in Cusco was at the Belmond Monasterio Hotel a former 16th century monastery and a protected national monument.

* The writer flew to Peru courtesy of LATAM Airlines. LATAM Airlines is the leading carrier to and from South America with the largest network and connectivity throughout the region. LATAM operates four flights a week from Auckland to Santiago, Chile, the gateway to South America with onward connections to 124 destinations in South America. For more information or to make a booking call LATAM reservations on 0800 700 647, visit your local travel agent or www.latam.com