A walk on the wilding side

Pine trees that have been sprayed are quickly replaced by a new generation of wilding pines. The western slopes of Mid Dome are dominated by wilding pines, despite efforts to control them.
Alina Suchanski heads up one of Southland’s dominant landmarks and discovers a problem affecting much of the South Island.

Among Southland’s many mountains and hills three landmarks stand high above the farmland spreading around them. 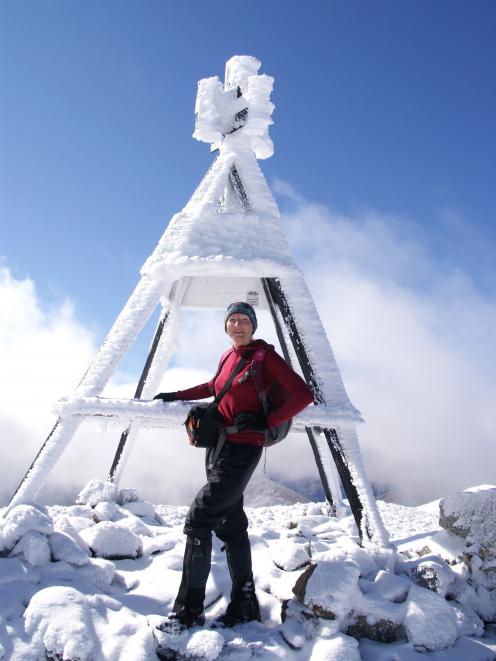 The author at the top of Mid Dome. PHOTOS: ALINASUCHANSKI
Flanked by East Dome (1349m) and West Dome (1270m), the highest of the three — Mid Dome (1478m) — towers above State Highway6 half-way between Invercargill and Queenstown, near the junction with SH94, which winds its way west to Te Anau and Fiordland. Having scaled West Dome in 2018 and East Dome in 2019, I was compelled to conquer Mid Dome.

On a crisp early spring morning, two members of the Fiordland Tramping and Outdoor Recreation Club (FTORC) met with two representatives of the Wakatipu Tramping Club (WTC) beside a farm gate at the foot of Mid Dome. After a short chat with Blair the farmer to obtain his permission to pass through his land, we set off across a paddock to the start of a track zig-zagging to the top of the mountain.

Climbing steadily through low cloud and fresh snow, we followed a track where native tussocks competed for space with thousands of pine seedlings.

One of my companions, Richard Bowman of the WTC, is a trustee of the Mid Dome Wilding Trees Charitable Trust, which was formed in 2006 by a group of locals concerned about the spread of wilding pines. Walking with Richard I soon learned that the main offenders were not Pinus radiata, commonly planted for timber, but Pinus contorta, a vigorous spreading conifer species that threatens landscape values, biodiversity and farming productivity.

Pinus contorta was introduced to Mid Dome in the late 1960s in an attempt to stabilise high country pastures which were eroding due to excessive burning, high stocking rates and the impact of rabbits.

The solution was effective, with the pines quickly taking hold of the western slopes. However, 30 years later it was noted that the pines were spreading beyond control and efforts have been made since then to try to control them. Aerial spraying has been successful but has left behind ugly skeletons of dead trees with new seedlings taking residence among them.

After just over three hours, we reached the summit marked with a trig and several spiky cellphone and TV antennas. A rocky area on the top had sparkling snow drift clinging to the man-made structures softening all sharp edges. Steel-coloured clouds hung low obscuring most views. It wasn’t until we were well on our way back that the sky cleared and the clouds lifted to reveal the panorama of farmland fringed with snow-capped mountains all around us.