A wee flutter in Ireland 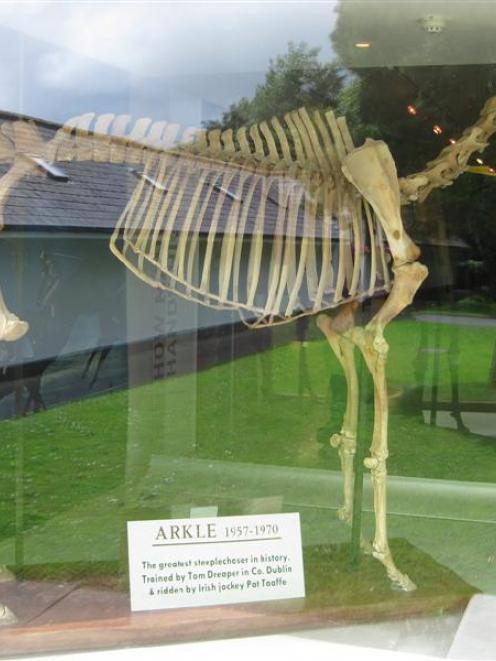 At the entrance to the museum at the Irish National Stud is the mounted skeleton of the great steeplechaser Arkle, winner of 27 of his 35 starts. His strength was reputed to have come from drinking Guinness twice a day.
New Zealand and Ireland both know how to grow green grass and that's what we're told produces top-class racehorses.

"Following the horses" is a popular pastime in Ireland and I wanted a taste of it on my first visit to that country.

Although I am not a regular punter or racegoer, I have to admit the sport of kings is in my blood.

In the 1950s, we lived next door to the Avondale racecourse in Auckland.

My father would occasionally gain free entry into a race meeting by posing as a man with connections by carrying a saddle through the owners' and trainers' entrance and I would tag along.

One of my earliest memories was, as a 5-year-old, taking a shortcut behind the stables and stumbling upon a dead horse.

What a shock for a wee lad! In an earlier race, this superb animal had carried the hopes of its owners and a swag of punters.

But a stumble in full flight and a drift back through the field indicated a broken fetlock, leading to the inevitable "putting down" of the poor beast at the end of the race.

Dragged by tractor to the rear of the stables, this magnificent creature was now alone and lifeless, its only companions a swarm of flies.

Such is the glamour of horse-racing.

But that's not a very cheerful introduction.

To find out more about the thoroughbred industry in Ireland, I took a visit to the Irish National Stud in County Kildare.

A feature of this splendid equine establishment is the Tully River, which feeds the lakes on the property.

They told us the water is highly mineralised and, as a drinking water, produces good bone formation in horses bred there.

As I took a stroll towards the mare and foal paddocks, I was faced with a conundrum.

Attached to the railing was a wooden nameplate bearing the name Vintage Crop.

Surely not the famous Irish racehorse that travelled all the way to Australia to win the ultimate of staying races - the Melbourne Cup? It didn't make sense.

What would he be doing in a paddock for broodmares and their foals? I continued my tour around the beautifully laid out stud, viewing the stallion boxes, the foaling unit, saddlery and the museum.

The Irish know how to revere great horse-racing legends.

At the entrance to the museum visitors are greeted with the mounted skeleton of the great Arkle, winner of 27 of his 35 starts and regarded as the greatest steeplechaser of all time.

His strength, they claim, came from drinking Guinness twice a day.

Inside the museum, I was drawn to the video replay of the 1993 Melbourne Cup, won by none other than Vintage Crop.

In the souvenir shop are postcards of the famous horse, this handsome chestnut with the white blaze on its nose.

Armed with my Vintage Crop postcard for identification, I galloped back to the broodmare paddocks for enlightenment.

This area of Tully Walk was now deserted, but in a distant corner, I spied three grazing horses.

Could one of these be the equine superstar? With my trusty postcard, I zoned in on a familiar white blaze and asked one of the handlers, "Is this Vintage Crop?" "Yes," came the reply.

But before I could display my star-struck delight, I had to ask, "What's he doing in a paddock of broodmares?" How silly I felt.

What safer place to graze a gelding! Yes, this was the final retiring place for Melbourne Cup winner Vintage Crop, one of Ireland's finest sons.

The Irish thoroughbred is no stranger to New Zealand, as the (IRE) entry in many a racebook would tell you.

In 1993, the year of Vintage Crop's great triumph in Melbourne, I had a small syndicate share in Selliera, a brown mare out of the Irish-bred stallion Khairpour.

But no big cup win for this Irish-bred - a third in the Waikouaiti Cup was her lot.

I left Co. Kildare a happy man and on to Templemore in Co. Tipperary.

Here we enjoyed the best of Irish hospitality at the home above the dress-shop of Maura and Fintan Ahern.

A chance meeting with one of their daughters at John Fogarty's Blarney Bar at the Empire Hotel in Dunedin gained us an invitation to stay with the family.

In the lounge of their home, I was in for an unexpected surprise.

Adorning their walls were photos of their son, Eddie Ahern, one of Ireland's leading jockeys, now based in England.

Trophies from big race wins in England, Dubai and Singapore sat proudly on the mantelpiece.

No sooner had I revealed my interest in the horses, Maura Ahern was on the phone to her son.

On the road between race meetings at Ascot and Newmarket, this former champion apprentice was only too happy to talk to me about his upcoming rides for the day.

What luck! My chance for a couple of tips, not quite from the horse's mouth, but from the jockey on its back.

Betting shops in Ireland are second in popularity to pubs.

In this small town of Templemore, I discovered three betting establishments in the main street, all happy to take my euro for a wee flutter on the horses.

Hackett's, Ireland's largest independent bookmakers was my choice for an investment - but Eddie Ahern did not grace the winners' circle for me that day.

Word got back to me that of the 13 pubs in Templemore, one called Eddie Joe's had a publican whose horse, David's Lad, had won the Irish Grand National.

Accompanied by my two Irish hosts, I set out in the late evening to visit Eddie Joe's pub on the outskirts of the town.

Eddie Moran, county councillor, publican and lucky owner of the 2001 Irish Grand National winner, was very much the consummate host.

When I told him that this was my first visit to Ireland from faraway New Zealand, he obviously detected a hunger in my eyes.

"Can I make you a sandwich?" he said.

But thirst got the better of me instead.

Seated at the bar with a pint of Guinness, I soon relaxed and enjoyed the chatter on the subject of horses.

It took a little time to adjust to the fast clip of the conversation but before long I found my foot tapping to the melody of the publican's banter - all it needed was a fiddle accompaniment to resemble a good rendition of Phil the Fluter's Ball.

Sitting proudly on display behind the bar was the handsome silver trophy awarded to Eddie Moran and his racing syndicate for David's Lad's win in the Irish Grand National, a race also won by the legendary Arkle in 1964.

Set to run in the Grand National at Aintree, the Irish-bred was denied a start after being suspended for "using the racecourse as a training ground", a nice way of saying that in a lead-up race the trainer and jockey allegedly failed to race the horse on its merits.

The suspension was appealed all the way to the Supreme Court but to no avail.

Eddie Moran's horse did get to run in the big steeplechase at Aintree the following year but fell at the 27th fence when in a handy third place.

It was now after midnight - the small pub had closed its doors at the official closing time of 11pm.

A ride home by our publican completed a grand night filled once again with the best of Irish hospitality.

At the end of July, all roads lead to Galway, an Irish county synonymous with horse-racing.

The Galway Races were firmly on our agenda.

This world-famous festival, dating back to 1869, is held at Galway's Ballybrit racecourse and attracts more than 170,000 spectators over the week.

The biggest crowds converge on Ladies' Day, where glamour and fashion compete with top-class racing.

This was our day of choice to experience, for the first time, horse racing in Ireland.

I was surprised to find that four of the eight races on the card were steeplechase and hurdle events, here a summer attraction compared to its more common winter setting in New Zealand.

My biggest hurdle for the day was behind the wheel as I negotiated my way to the track along with 44,500 other visitors keen to experience top-quality Irish racing.

Stiletto heels were a challenge in the soft conditions underfoot for the thousands of fashion-conscious women delicately extricating themselves from the carpark paddocks as they headed for the more supportive asphalt at the turnstile gates.

And complimentary blister packs greeted female patrons in anticipation of the sore feet that would trouble many at the end of a long day in high heels.

Not to miss an opportunity, bookmakers Boylesports release betting odds on the big fashion event.

The shortest odds in each category suggest that an under-30 brunette from Dublin in a cream dress will win the coveted Best Dressed title.

I'm intrigued with the odds being offered on the winner's hair colour and being a gambling man, I plumb for a long-shot - 50/1 for a blue rinse to get the judge's nod.

But let's not forget the horses.

This was a race from a standing start rather than starting gates.

Like a shoal of fish, the field of 20 tightly packed runners circled at the start, their riders "jockeying for position" to get the best possible advantage at the fall of the tape.

This was Irish jumps racing at its finest.

But it was not to be an Irish victory on the day - the British raider Overturn led all the way to win by five and a-half lengths.

If you want to see Ireland at play, the Galway Races in July is the place to be.

It certainly showed me how the Irish love their horse-racing, particularly over the jumps.

And even if you are not a race fan, the glamour and fashion, the bookies' umbrellas with their panoply of colour, the fun and camaraderie and the flow of Guinness all make this a social occasion not to be missed if you are planning a trip to Ireland.

My time for "following the horses" in Ireland had come to an end as we headed off to the Mary of Dungloe Festival in Donegal.

I wonder if they have a racetrack there?