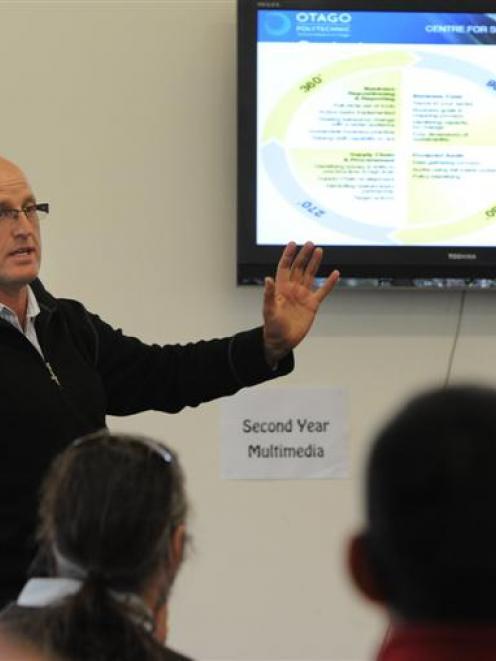 Otago Polytechnic Centre for Sustainable Practice manager Steve Henry, of Wanaka, addresses an audience in Dunedin on Monday. Photo by Peter McIntosh.
Filling your vehicle up with biodiesel was just the start of a more sustainable future, business leaders were told on Monday.

Dunedin was the last in a 10-stop nationwide tour promoting not only the benefits of biodiesel, but the advantages in adopting sustainable business practices, Mr Henry said.

"It means doing something we are not used to doing in New Zealand - long-term planning."

Business owners and members of the public were asked to register their interest in Dunedin's first biodiesel depot, which is to open in Green Island early next year.

A 20% biodiesel blend, called B20, would be supplied by Richardson Group-owned Allied Petroleum, which would also operate the Green Island venue.

The "environmentally friendly fuel" was blended in Christchurch using recycled cooking oil sourced from all over the South Island, and diesel.

Unlike its Queenstown counterpart, the Dunedin depot's biodiesel would be available to the public due to its larger population, he said.

Businesses, some with up to several hundred vehicles in their fleet, had been told by their respective head offices to "reduce their carbon footprint".

However achieving sustainability was more than just filling up a vehicle, and the polytechnic was offering a sustainable business programme to help companies achieve their goal.