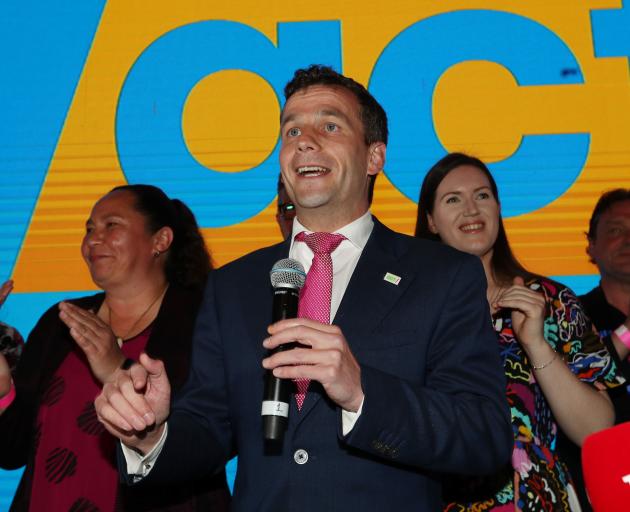 A giddy David Seymour on election night. Photo: Getty Images
Act New Zealand is considering setting up a southern base to capitalise on its election night gains in Otago and Southland.

"Because it’s such a large area, if you put an office in one place that’s not a help to most of the people.

"It may be that an actual physical base is not what we need and it needs to be more of a pop-up presence."

The southernmost of Act’s 10 MPs is from Christchurch, but Mr Seymour said all members of his new caucus would be regular visitors to the South in the next three years.

Returns from individual polling booths have been released by the Electoral Commission, and show how marked the turnaround in political fortunes has been in the South, particularly for Act.

The party, which did not register a single party vote in multiple polling places in Otago and Southland in 2017, was up into the hundreds in several places.

Much of that vote appears to be disaffected National voters changing their allegiance, but Mr Seymour felt it was a stepping stone in the continued growth of Act.

"I think what you have seen is a lot of brave new adapters vote for a party which has had extremely low support for a decade.

"Now that that has happened, I think that there are a lot more people in a second wave who will take a second look at Act, and I think our potential is almost limitless."

Mr Seymour spent three days in Otago and Southland during the election campaign, even though Act did not contest all the southern electorates , something the party would rectify in 2023.

The surge in support for Act helped contribute to Labour winning or coming a close second in polling places it lost by big margins three years ago.

However, in some places such as Balclutha — where almost 600 more people voted for Labour in 2020 than in 2017 — a decisive swing to Labour was also notable.

Labour national council Otago-Southland representative Luke Nickholds said the party was yet to analyse the returns, but he suspected its improved performance in the provinces was because voters were able to connect with some talented Labour Party candidates.

"For example, Jon Mitchell in Southland and Liam Wairepo in Waitaki put in the hard yards going around every corner of their electorates, and having hard-working candidates gave us more opportunities to connect with people who care about the health of their communities and share our pride in Labour’s recent work."

"Locals were able to get energised about the likely prospect of being represented by a Labour electorate MP, and Ingrid Leary made sure that everyone in town had multiple chances to hear how exciting a prospect that was."