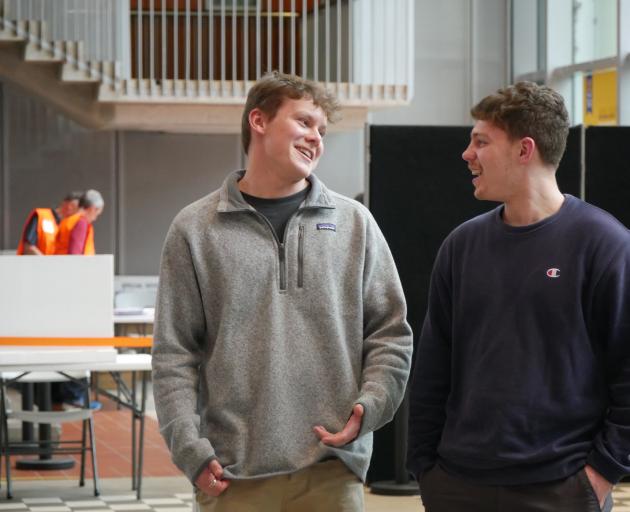 University of Otago students Ben Wilkins (left) and Max Pahina (both 19), both of Wellington, chat in the university link after voting in the general election on Monday.PHOTO: JESSICA WILSON
The Otago University Students’ Association president is hoping for a high turnout of first-time student voters this election.

Jack Manning said the association tried to guide students and support them "in knowing how best to make use of their democratic right".

This included launching an inaugural politics magazine and running "politics week", a week of events to get students engaged in the Cannabis Legalisation and Control Bill Referendum, the End of Life Choice Referendum and party policies.

"So we’ve tried to do a lot on campus to get students, particularly first-time voter students, engaged with the substance of this election and, hopefully, we will see that reflected in a good turnout," Mr Manning said.

The current political climate meant students had a interest in the election and the country’s decision-makers, he said.

"I think we’re seeing that particularly strongly this year."

Mr Manning said the association was nonpartisan — not biased towards any political party — but it was interesting to see their campaigns.

Announcements made by parties regarding climate change, education, mental wellbeing support and the Covid-19 economic recovery were particularly relevant to students, he said.

"We’ve had some of the party leaders on campus over the past few weeks and it’s been really great to see how they’ve been received by students."

Students have been able to vote on campus in the link, St David’s Complex and Unipol since early October.

"Those voting booths are right near where people are studying, grabbing their coffees, having their tutorials or sitting with their study groups.

"I’m really pleased with how accessible voting is on campus this year.

"I think it’s an incredibly enabling thing for a demographic that is often somewhat under-represented in the voting turnout."