On Saturday Ms Ardern achieved what was thought impossible, securing an absolute majority for a single party in an MMP election.

But National also stretched the bounds of credibility to breaking point by losing stronghold seats such as Ilam, Rangitata and New Plymouth.

While the 26.8% of party votes National received was not its worst ever result — that ignominious claim to fame remains that of former Clutha-Southland MP Bill English, who lead National to 20.93% in 2002 — the 2020 election was a defeat of epic proportions.

Leader Judith Collins was defiant yesterday, saying she would not step down from National’s helm and launching a review of its election campaign.

National list MP Michael Woodhouse, of Dunedin, said an objective review of his party’s performance was the correct next step, and in the interim he backed Ms Collins remaining as leader. 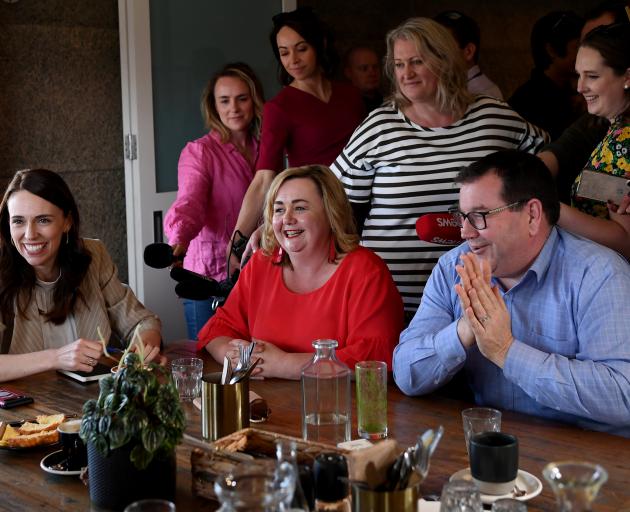 Prime Minister Jacinda Ardern meets returned MPs Megan Woods and Grant Robertson at a cafe in Auckland yesterday. PHOTO: GETTY IMAGES
"I don’t think any of what happened can be a reflection on her leadership and I think cool heads need to prevail: undertake the review, reassemble, and hopefully refocus on the issues and discipline that a strong caucus needs."

Undoubtedly the main factor which steamrollered National was Covid-19, and New Zealanders’ strong approval of Ms Ardern’s leadership throughout the pandemic crisis.

However, changing leaders three times this year severely handicapped the party, Ms Collins having only a few weeks to try to put her own stamp on National.

She was not helped by caucus disunity, which saw damaging leaks and crippling anonymous disloyal comments surfacing in the final days of the campaign.

Disenchanted National voters looked elsewhere for options: many shifted sideways to Act New Zealand, which landed 8% of the vote and the Epsom seat and brings 10 MPs to the new Parliament.

Some even held their noses and voted Labour for the first time, many being rural voters hopeful a Labour majority government would mean less influence for the Green Party.

However, Ms Ardern has said she will talk to the Greens, whose 10 MPs is impressive for a minor party after a term as a government support partner, but ultimately not pivotal.

Ms Ardern has been shorn of the support of New Zealand First, however, whose 2.7% surely marks the end of the political career of leader Winston Peters, the most intriguing and controversial figure in recent political history.

However, there is always hope. The Maori Party, which looked doomed to oblivion after losing its two electorate seats in 2017, is back in Parliament after winning Waiariki.

Its new MP Rawiri Waititi will have a difficult three years ahead, but as Act leader David Seymour has shown, one seat at the table can be a stepping stone towards greater success.

Good work. Lots of it, too.

How many times did labor change their leadership before they hit on the right combination?.