By Matthew Mckew
2 Comments
Borrowing and the border closures were hot topics in a feisty debate in the Queenstown Memorial Hall last night.

Labour finance spokesman Grant Robertson had stern words for an audience member who wore a Maga hat with the words Make Ardern Go Away.

"She has more courage and intellect than you will ever have, sir."

The man had asked what cost analysis was done before imposing a lockdown at the start of the pandemic.

He said by having strict rules, New Zealanders now enjoyed more freedoms than people in many other countries and the economy was starting to recover.

Mr Seymour was outspoken, criticising the Government for spending too much money and called the strategic tourism asset programme funding that was given to AJ Hackett Bungy "money for photo ops".

A small business owner in the audience asked Mr Robertson why the Government had picked "winners and losers" with the funding.

In reply, Mr Robertson said he could understand frustration at seeing others get money, but there had been support for small business through the wage subsidy and there would be greater support in future.

Earlier in the debate, he said Labour was providing the funding for arterial routes into Queenstown and a town centre redevelopment.

Mr Goldsmith, who came under fire for holes in the National policies budget, said his party would enact a stimulus tax cut putting on average $3000 in people’s pockets to spend on domestic tourism.

But, Mr Tabuteau said this would lead to teacher and nurse cuts, while Mr Shaw said a tax cut would not guarantee money went towards holidays.

He said evidence was there to show greater spending on cars and DIY by New Zealanders.

Mr Seymour said he wanted to see smart borders, with flights of Americans coming in to quarantine at private holiday resorts.

Mr Shaw said one in three of New Zealand’s armed services personnel, as well as police and health professionals were all being used to enforce a tight border.

He said allowing the private sector to manage quarantine would "open a chink in the armour". 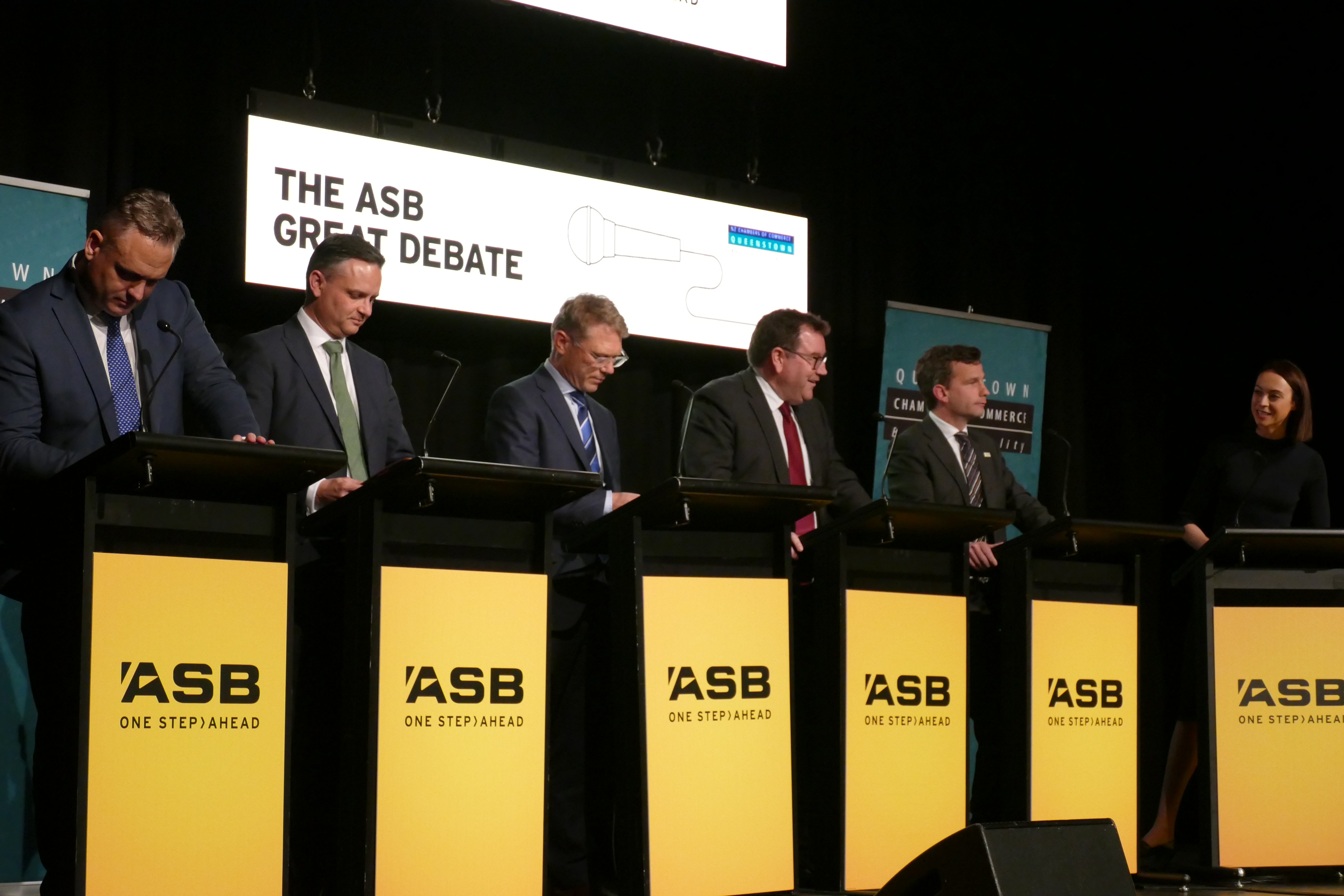 Mr Robertson hit back saying the problem with National and Act would be cuts to public services, including health.

Mr Seymour called Mr Robertson a "spendaholic" and asked if there was an epidemic of New Zealanders freezing to death before the "election bribe" winter fuel allowance.

Just over 400 people turned out to the debate, the first to be held in Level 1 conditions.

How is it that, when we are in the midst of a worldwide pandemic with no guide book telling us the best way out, some politicians are criticising the response, sniping and complaining that they haven't had time to campaign. This is a worldwide crisis and yet all we hear and read are promises based on vague ideas and variations on what is already happening. Childish barbed comments are a school yard taunt that belong in a playground. Where are the silver bullet ideas; the ones that preclude exposing this country to the same vulnerability being experienced by other countries. We don't need rehashed ideas: like covid passports that come from a country failing to control the outbreak; we don't need to use private companies for isolation that put profit ahead of the intent, that idea worked so well with private security. How about the Silver bullet ideas, after all it is what politicians are getting paid to come up with.

The reason why there are no "silver bullet" ideas is because they have none. Much easier to criticise what the Labour Govt have done than come up with realistic alternatives. The Nats would have had open borders a long time ago with the result that we would have more deaths and hospitals over-run, same as has happened overseas. Thank God they are not in charge.