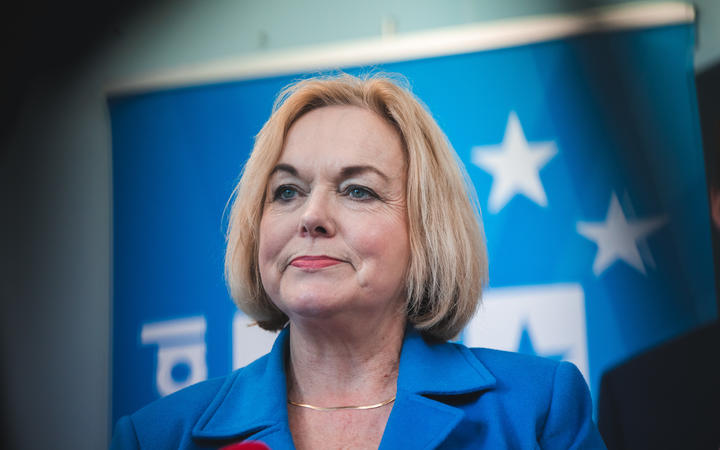 National Party leader Judith Collins. Photo: RNZ
National's caucus will today begin the task of trying to pick up the pieces, at its first meeting following the weekend's crushing defeat.

The caucus is a sombre affair this morning as retiring MPs and those who lost seats in Parliament gather for the traditional silver tray ceremony – they will each be presented with one.

Surviving and outgoing MPs have started arriving at Parliament this morning, and many are blaming an email leak for the election result.

An email from MP Denise Lee to the rest of caucus objected to party leader Judith Collins' decision to announce a review of the Auckland Council – and was leaked to a media outlet.

Collins has said that leak cost them about five points in the polls.

Northland MP Matt King urged the leaker to "front up."

He said the leak had definitely been a factor in National's result, but it was not the only reason for it.

He said he had to give credit to Labour for its result. "We have to acknowledge that. It was a decisive victory."

He was also nervous about holding on to his own seat of Northland, saying it was "on a knife edge" and special votes usually favoured Labour. He is currently just 729 votes ahead of Labour's Willow Jean Prime, and will not get back on the list if he does not hold the seat.

While there's been speculation that Collins' job may be on the line, it appears National MPs are still backing their leader for now.

Some of them were putting on a brave face as they arrived back in the capital yesterday.

Many, like Kanwaljit Singh Bakshi, were only back to say goodbye.

"Oh that's all right. You have to take it on the chin and move on. There's life after politics so we'll continue with that. But obviously very disappointing for a lot of us," he said.

National MPs from the class of 2008 met for a farewell dinner last night.

Melissa Lee - who is one of those still in a job - said the result was "devastating".

"We've always been very close friends and we've all become, you know, brothers and sisters. I love every single one of my colleagues and I feel terrible for those who did not make it this election," she said.

So far as the leaking during the campaign is concerned, she said: "That's something I'm really angry about. I just think New Zealanders will be very disappointed in us. We just look like politicians who can't actually keep it together.

"I'm really disappointed whoever it is and hopefully it will stop."

Lee said the problem with emails was they were sent to not just MPs but also their staff and possibly other people. She added she was not accusing staff of being behind the leak of the email she sent.

She advised any National MP who was leaking to media about Judith Collins being dumped as leader to "shut up".

Barbara Kuriger said the caucus was united behind Collins. Three leaders, departing MPs and board members and leakers had made for a difficult year but Collins had "kept a smile on her face every day".

She said there was no room in caucus for leakers.

She agreed it was ironic that the team ran on a strong team banner.

"We weren't the best team... You can have all the best players, it's no different to the rugby. If you've got people dropping the ball, or not being able to do the right thing, then you don't win, and that's what happened."

The Government could be formed and sworn in before the final results are declared on November 6.