Labour is promising to keep Southland's Tiwai Point smelter on life support for another three to five years while the Government works to transition the region's economy.

Prime Minister Jacinda Ardern arrived to a snowy Invercargill this morning, to talk with Southland community leaders about the issues facing the region.

Her first stop was Murihiku Marae, where she met Ngāi Tahu leaders to discuss the smelter closure.

She was welcomed with a haka, and chairman of the Ngāi Tahu Māori Trust Board Tipene O'Regan opened the meeting, saying transforming the smelter into a hydrogen plant was a “no brainer” decision. 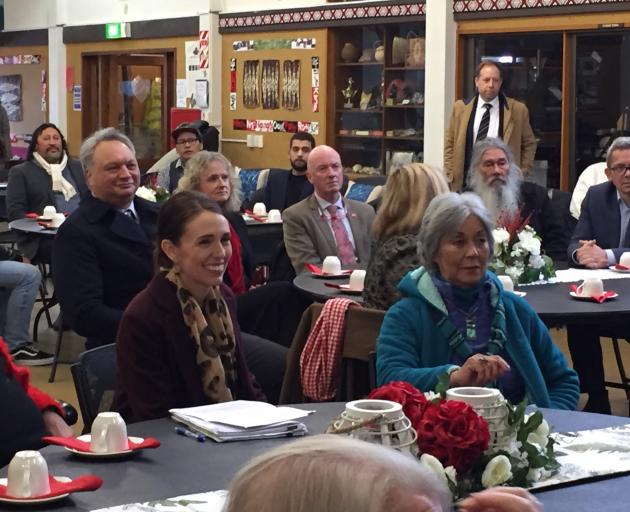 If re-elected next month, the party would work to reduce the amount of money the smelter pays for electricity - the major reason why Rio Tinto said it was closing the plant.

But there is a catch.

If the company wants cheaper power prices it needs to maintain current employment at the site, agree to work on remediation and work with the Government when it comes to the future use of the plant.

If the smelter does not meet these "bottom lines," the deal will be taken off the table.

In the meantime, a Labour-led Government would work to transition Southland's economy to create greener jobs.

Ms Ardern said the three to five-year extension would protect jobs now, as well as give the community time to consider and plan for the future.

"We will be investing in Southland's economic development based on a transition plan developed by local leaders and the community," she said.

In a statement to the ASX, the company said its strategic review had shown the business was "no longer viable given high energy costs and a challenging outlook for the aluminium industry".

The Southland smelter employs about 1000 people directly and creates a further 1600 indirect jobs in the region. Tiwai Point is one of the highest electricity users in New Zealand.

At the time, Deputy Prime Minister Winston Peters hinted at a Government buyout of the smelter.

But Ardern today ruled that out.

"We've been clear in Government that there will not be any further direct subsidies for Rio Tinto to continue operating the Aluminium Smelter," Labour's policy said.

Labour's energy spokeswoman Megan Woods said the extending the life of the aluminium smelter requires an agreement on electricity transmission costs - and that takes time.

Under the current system, electricity users - companies and consumers - pay for their power and the costs associated with maintaining the electricity grid as whole, based on how much they use.

Rio Tinto's position has said it pays a disproportionate amount for the transmission infrastructure across New Zealand, given they obtain most of their electricity from the nearby Manapouri hydroelectric power station.

Labour has promised to change how this works so the company won't have to pay as much; it would change the Transmission Pricing Methodology.

Under normal circumstances, any reduction in transmission costs for a major customer like the Tiwai would result in higher prices for other consumers.

But Ms Woods said Labour would negotiate a way forward to keep the smelter operating and prevent extra costs falling on other consumers.

"We'll do this by supporting Transpower to form an agreement with the smelter that preserves jobs in the medium term and gives Southland time to build a new economic future."

The Labour Party’s commitment to negotiate an extension to the life of the Tiwai Point Aluminium Smelter was welcomed by Southland leaders.

“Labour’s promise to help Southland with a Just Transition - creating new, sustainable jobs for the future - is good, but we need a firm and substantial commitment to funding not just the transition office which will be based in Southland, but also the projects that will come out of that initiative.

Mr Hicks said the region "has well developed plans"  for industries which would take Southland to the forefront of innovation.

"Getting these ideas off the ground will take time as well as significant government investment.

“Labour’s announcement is an important step in the right direction, but we will need to see it backed by successful negotiations with Rio Tinto and firm funding commitments for economic development. We stand ready to work with Central Government following the election to get this plan under way."

Look at all those face masks and 2m spacing.
No doubt the police will be having a word......

Invercargill is at level 1 not level 2, masks and distancing recommended but not required. https://covid19.govt.nz/alert-system/alert-level-1/

Why hasn't the Southland business community got contingencies in place already? After all it is not as if this has come out of the blue , as RT threatens to close Tiwai every couple of years and has done for at least 15. Why is it the government's responsibility to bail out businesses etc when we are constantly told the free markets knows best . This ideology only seems to hold true while business is good and top end wages. We get told business is better when govt hands are off , yet all this seems to go out the window the moment profits drop or bottom end wages threaten to rise . Then it is govt bail us out , govt subsidize our costs , etc etc .

Let Tiwai close or let the business leaders that say it is so vital subsidize it, that's the freemarket way after all
.

That chap who goes to everything (pictured middle) was on the Coast with the PM's party. Is he Parliamentary Services?