Prime Minister Jacinda Ardern says she is backing New Zealand's economy to "rebound" amid the country's first recession in 11 years.

Ardern is in Palmerston North campaigning with her finance spokesman Grant Robertson.

Figures from Statistics New Zealand today show that the economy shrunk by 12.2 per cent in the last quarter.

Two consecutive quarters of negative growth means the country is in its first recession in 11 years. 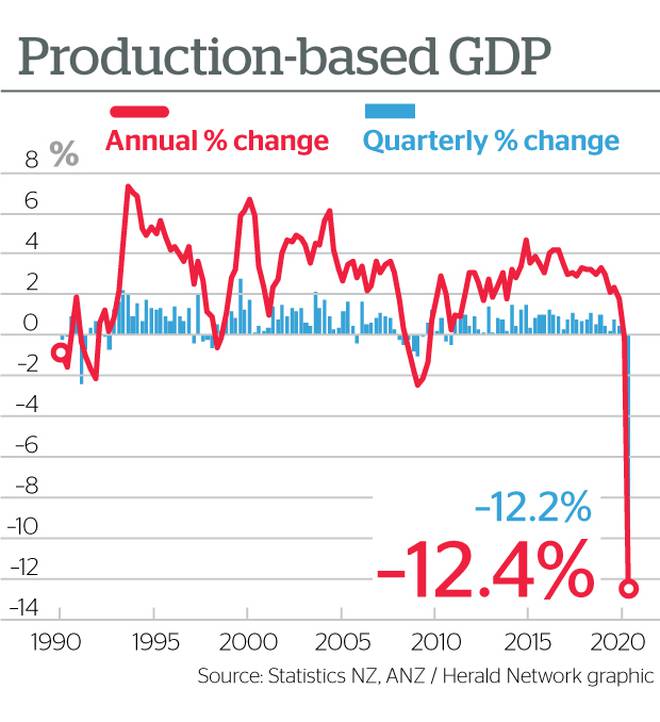 Speaking to reporters Ardern said: "I back New Zealand to rebound."

Asked about the 12.2 per cent drop, Ardern said that was lower than expected.

Robertson said New Zealand's growth and rebound would be "faster and quicker" than that of Australia's economy.

"I back our approach - I think we compare well with Australia on a number of fronts," he said.

Robertson said Covid's impact on the economy was a "1-in-100 year shock".

Asked about the fact the Treasury forecast a 16 per cent drop, and the fact that the drop was actually 12.2, Robertson said forecasting was "an art more than a science".

But he said this was all "backward looking data" - most of the press conference was Ardern and Robertson looking forward to the economic bounce.

Asked about the Covid numbers today, Robertson said it shows "we are on track - our plan is working".

PM: No reduction to tobacco tax

Ardern said a Labour government would not reduce taxes on cigarettes and that she would not negotiate on that with Winston Peters, who was calling for this tax to be reduced - "we want people to stop smoking in New Zealand".

Asked if she would like to see Peters stop smoking, she said "that was a decision for him" and added she has never had a conversation with him about this.

Ardern said she can "make coalitions work" and she has "proven" that she can make "even the most complex of those work".

Asked about Peters' comments that this was the "worst campaign ever" Robertson joked by responding "is that because of the price of cigarettes?".

Peters said the Government's Smokefree 2025 approach was not working - and it was hypocritical to hold a referendum on legalising recreational cannabis.

"New Zealand First will lower tobacco excise so that the average pack of cigarettes is no more than $20, remove tax from smoking cessation tools, and put a stop to the belief that what we're doing is working," he said.

Labour's $5b in infrastructure spending

Ardern said a Labour government would focus on infrastructure growth, which would have a focus on training more builders.

She cited her Government's record so far when it came to training people to work on building sites.

She also talked up the $5 billion the Government has spent in the lower North Island, when it comes to infrastructure.

Labour, she said, would support employers.

She said that over the last seven months, there was only a period of six weeks when construction wasn't happening. After that, there has been "good growth" in the sector.

This was in response to National's criticism of the Government not allowing construction over the first lockdown.

Although the drop was not as sharp as the Treasury was expected, it is still the biggest one-off quarterly dip in New Zealand's history.

In fact, according to Statistic NZ, it was the largest quarterly fall recorded since the current series began in 1987.

The numbers mean New Zealand is now officially in a recession.

In a statement this morning, Robertson said the figures were "better than forecast".

"The June quarter includes almost the entire time New Zealand was in alert level 4 which we moved into on March 26, so this result is not surprising."

He added that today's numbers were better than Treasury's estimates, which were yesterday revised down from a 23 per cent drop, to a 16 per cent contraction.

Soon after the data was released, National leader Judith Collins said this was a "devastating time" for many families in New Zealand.

Collins said many small businesses are feeling "a lot of heartache".

Collins again doubled down on the line that National would have "not let Covid-19 into New Zealand" as a way of saying what her party would have done differently to the Government.

She said tomorrow, when National unveils its economic policy, it would show a clear difference between her party and Labour's.

National's finance spokesman Paul Goldsmith said New Zealand is in a "deep hole" at the moment.

Meanwhile, Ardern and Robertson re-announced that the Government has spent $5 billion of lower North Island infrastructure projects - they said they plan to spend more too.

The list of projects they cited included projects in Wellington, Manawatū, Horowhenua, Whanganui and Palmerston North.

"With historically low interest rates, we are able to outline this much-needed investment in infrastructure," the party said in a statement.

It said similar investments would also be carried out across the rest of the country.

This GDP result is actually worse than the Great Depression of the 1930s. We need investments to train workers for farmers/orchardists/fisheries, and not burdening our kids/grandkids and great grandkids by borrowing to the wazoo. Time to bring essential manufacturing back to NZ, and keep it here. We are having our Southern fisheries harvested by factory ships offshore, our forest logs exported and we reimport NZ grown pine furniture- these things need to stop and the work done here, NZ should export the valued added product. There is plenty of labour to go around and money for factories instead of over priced housing/speculative investing.