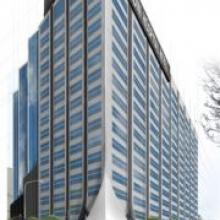 An artist’s impression of the proposed new Dunedin Hospital Hotel. IMAGE: SUPPLIED
A secret proposal to fund the Dunedin Hospital rebuild through a controversial public-private partnership that would deliver the city its long-awaited five-star hotel can be revealed.

The Otago Daily Times has been leaked details of a plan to combine the hospital rebuild and a five-star hotel into a $1 billion development split between two sites.

A five-star facility worth more than $800 million would be constructed on the existing Dunedin Hospital site catering for hotel guests and private hospital patients.

A hospital-only facility worth $200 million will be built in South Dunedin for public patients, possibly at the former KiwiRail Hillside site.

It is understood both hospitals would include an emergency department, but non-paying patients who went to the hospital hotel would be stabilised and transferred to South Dunedin.

It is hoped a focus on cosmetic surgery, and a health and wellbeing spa complex, will attract private patients from overseas, including the burgeoning Chinese tourism market.

Talks are understood to be under way with Dunedin Airport to extend and widen the runway to accommodate Airbus A380 aircraft for the expected growth in medical and spa tourism.

The historic physio pool in the hospital's Fraser Building would be saved from demolition and redeveloped as a health and wellbeing spa.

The 18-storey complex would feature 250 hotel rooms, and 300 hospital beds.

As well as room service for patients and guests, the hospital hotel would feature several restaurants.

Patients at the South Dunedin site would receive ready-meals trucked from Auckland.

A decision on whether to proceed to the next stage of the proposal is expected to be announced at noon today.

Project consultant Claude Flien-Flyoute, of Davos, Switzerland, said Dunedin needed a new hospital and a five-star hotel, but efforts to advance them separately had failed.

"This is an exciting and audacious win-win synergy scenario for the city of Dunedin,'' Dr Flien-Flyoute said.

Initially reluctant to discuss the project, Dr Flien-Flyoute said he was prepared to comment to counter any "misinformation''.

He enthused about the "interlocking synergies'' that would benefit many parties, not least of whom were patients languishing on waiting lists, he said.

During lulls in tourism, public patients would be admitted to the hospital hotel to clear elective surgery waiting lists, Dr Flien-Flyoute said.

The local rescue helicopter would be contracted to fly patients from the airport to the hospital hotel, providing a revenue stream for the service's emergency missions.

"The Government is clearly unable to deliver its promise of a new hospital for your city.

"Consider the years of delay, the decrepit state of your hospital ... This project will endow Dunedin with not one, but two modern hospitals, a five-star hotel and serious opportunities for tourism growth,'' Dr Flien-Flyoute said.

"And we can start building next year, as we will dispense with the so-called planning stages that are really just the Government's way of delaying the capital spend as long as possible,'' he said.

The biggest hurdle would be gaining resource consent from the city council, he said.

He rejected a suggestion that public opinion could be the biggest obstacle, saying concerns over privatisation were "risible''.

It is understood the secrecy around the Dunedin Hospital rebuild project in recent months has been to allow the Government and Southern District Health Board to consider the plan proffered by the Swiss consortium.