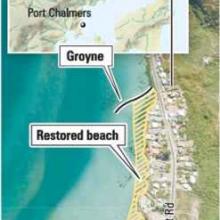 Information on plans for a restored beach near Harington Point, a $10 million wharf extension and a $100 million channel-deepening project was released by Port Otago yesterday.

The company last night presented details of its environmental assessment of its "next generation" project to a community consultation group, the Department of Conservation and Otakou-based iwi.

After more consultation, Port Otago plans to apply to the Otago Regional Council for resource consent, which would be publicly notified, in April.

Port Otago chief executive Geoff Plunket, in a briefing to the Otago Daily Times, said resource consent for the beach restoration would only be sought if the community backed the project.

The plan is to build a loose-boulder 80m groyne north of an erosion-prone strip.

A 200m beach stretching back towards Te Rauone beach would be formed using 45,000cu m of dredged sand.

The work has not been costed yet.

Port Otago has assessed the channel deepening would cause only minor effects.

The depth would increase from 13m to 15m when up to 7.2 million cubic metres of sand and silt was removed and dumped 6.5km beyond Taiaroa Head.

But resource consent was needed now because of the long lead-in time.

Mr Plunket said Aramoana's salt march and Shelly beach (visible from Port Chalmers at low tide) would suffer only from sediment suspended in the water, and both areas would be monitored.

During six to eight months of dredging, any affected areas of the 13km channel would be monitored and work would be scheduled to fit in with wildlife activities.

Commercial and public shellfish beds would not be encroached upon.

Mr Plunket said two parts of the channel would be widened - opposite Harington Point and at the Port Chalmers "ship-swinging area".

The up to $100 million project would include buying a fourth crane and a larger tug.

Port Otago wanted the 135m $10 million Boiler Point wharf extension, plus a further 30m fishing platform, to be built "some time in the next five years", Mr Plunket said.

Port Otago will meet the consultation group again on March 18 for its responses.

Last night, consultation group member Hoani Langsbury, from the Otakou runanga, said he could not comment until runanga had discussed the assessment at a meeting next week.

John Milburn, of Monarch Cruises, said group members were already fairly well-versed with the contents of the report.

Some were concerned there was not enough time to prepare submissions before the group's next meeting, but it seemed there would be further opportunities to make submissions after that.

He felt some of his ecological concerns about the project had been addressed in consultation over the past two years, while others still needed some work.