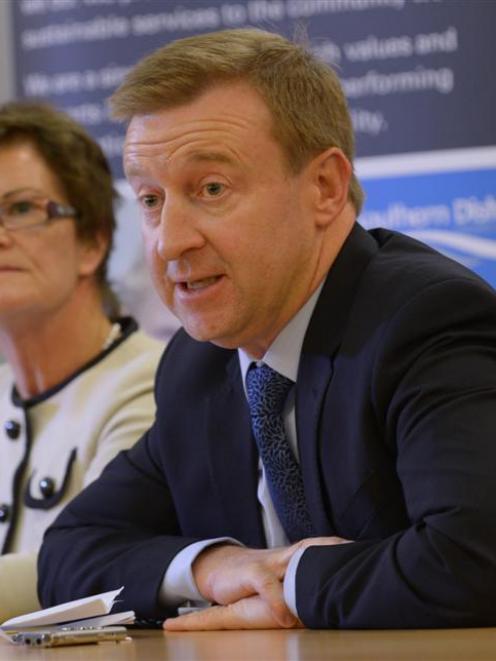 Minister of Health Jonathan Coleman fields questions during a press conference at Dunedin Hospital yesterday. Looking on is Southern District Health Board commissioner Kathy Grant. Photo by Gerard O'Brien.
The estimated price-tag on the new clinical services building at Dunedin Hospital is now as high as $300 million, rather than $200 million, Health Minister Dr Jonathan Coleman says.

Revealed the same week Dr Coleman sacked the board over its deficit, the soaring rebuild cost was promptly labelled an ''omnishambles'' by Dunedin North MP Dr David Clark.

Dr Coleman was in Dunedin yesterday escorting new commissioner Kathy Grant and her deputies, Richard Thomson and Graham Crombie, on a visit to Dunedin Hospital. Staff they had spoken to were pleased a commissioner had been installed, as it gave a fresh start, Dr Coleman said.

It was the commissioner team's first day on the job after the dismissal of the Southern District Health Board. In a press conference alongside the trio, Dr Coleman said Carole Heatly would keep her job as chief executive.

''Carole's going to be staying on. She's an important part of the team.

''The beauty of having a commissioner there is that you can cut through the decision-making processes that were in place under the previous governance model,'' Dr Coleman said.

The minister wanted to get the business case for the clinical services block rebuild to Cabinet for approval as soon as possible, but it would not be until next year.

In February, Dr Coleman said he still hoped to present the business case late this year - although it was more likely to be next year.

And that was slower than the timeframe given by his predecessor, Tony Ryall.

It was going to be a long process.

''These things can increase in cost and it could be up to the $300 million. That's the advice I've had about the rebuild of the hospital,'' he said when asked about the cost increase.

Asked if Dunedin neurosurgery would survive the coming shake-up of services, Dr Coleman's response indicated the Government was not keen to see the public riled up again over it.

''It's up to the commissioner to look at all aspects ... but obviously having been through a huge wrangle on neurosurgery just a few years ago, I think people would be loath to repeat that particular experience.''

The team was not expected to cut its way out of the deficit.

''This is not about cuts. It's about business as usual while the commissioners have a much longer timeframe to look at what the long-term strategy is.''

The board's projected deficit of up to $42 million next year had ''fluctuated wildly'', and the team had to work out the true figure.

''It's like turning round an ocean liner and the first thing is for Kathy and the team to have a chance to really get into the books, look into the mechanics of it, and really understand the workings of the DHB.

''These people are already well known in the community and I think that's going to be a strength, because in the end we want to take the community with us.

''Communication is going to be very important.''

Dr Clark, Labour's acting health spokesman, was scathing about a $100 million increase in the projected cost of the clinical services building.

''I'm not sure if this is irony or hypocrisy. Here he is criticising others for their strenuous efforts to balance the budget in his cash-starved health system while his own cost estimates shift by $100 million overnight.

''The situation is an omnishambles. Seven years into this Government's term, the people of the South deserve better.''

Board committee papers in April revealed an even slower timeframe was possible for the rebuild.

A staff report said detailed planning work to ''inform'' the business case would take until the end of next year.