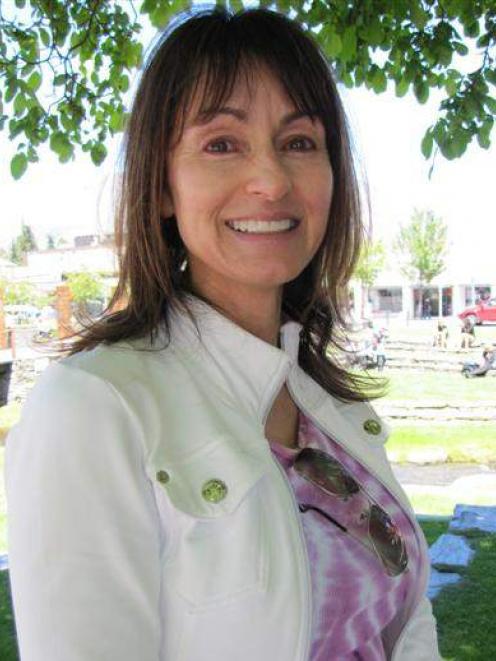 Stroke survivor turned inspirational speaker and author Kate Adamson, formerly of Otago, shared her experience of overcoming total paralysis caused by a devastating double brainstem stroke, in Queenstown yesterday as part of a South Island tour. Photo by James Beech.
Former Otago woman Kate Adamson says she was "locked in a glass coffin" for 70 days because she could see and hear everything, but could only communicate by blinking her eyes, after she was completely paralysed by a double brainstem stroke.

Now an inspirational speaker, Ms Adamson, of Los Angeles, but who was born in Oamaru and raised in Dunedin, shared the story of her incredible recovery and a message of positivity with a Queenstown audience at a talk at the Millennium Hotel last night.

Ms Adamson is accompanying Stroke Foundation Otago field officer Judith Hyslop, of Dunedin, on a tour of the South Island on behalf of the foundation.

Ms Adamson told the Otago Daily Times she experienced a "massive brainstem stroke" at the age of 33 and with two children aged 18 months and 3.

The sporty and healthy woman said she felt the warning signs for a month before she suffered "the worst headache of my life" at her family home, in Manhattan Beach, California in 1995.

"I noticed when I got up I felt dizzy, like I needed something to eat.

"That's when my left side went like jelly underneath me and I said to my husband, `I need to get to a doctor', and the next thing I remember is the paramedics running up the stairs."

Ms Adamson remembered being "locked in my body" and fighting for her life for 70 days in an intensive care unit.

Doctors told her she had less than a one in a million chance of surviving.

"My husband [Steven Klugman] was my biggest advocate.

"He said `Kate will be that one in a million'," she said.

"He realised I could communicate with the blinking and use the alphabet. People would point to a letter and I would blink once for yes and twice for no. The most frequent word was `home' - I just wanted to go home."

Ms Adamson said it was "pure hell" to be a prisoner inside her own body.

She was at the mercy of others and did not know if she would ever recover, she said.

She said she was alone with her thoughts and felt trapped, angry and depressed.

As a Christian, she asked God why she was stricken.

"I found myself bargaining with God. I was willing to do anything to get out of this mess.

"To suddenly go from being so fit and healthy and on top of the world to have everything stripped from you - the experience has made me more compassionate."

"I had to learn everything, to swallow, eat, write.

"I was like a baby; I had to restart everything."

She was still learning to live with her disabilities, including a non-functioning left arm and difficulty controlling her emotions, 15 years later, she said.

Ms Adamson wrote Paralysed But Not Powerless in 2004 and travels as a keynote speaker, talking about her experience, raising disability awareness and explaining how solutions to problems can apply to both the personal and corporate worlds.

She will talk in Alexandra's Centennial Court Conference Centre at 6pm today, then at locations around the South Island.

She will speak at the Dunedin Community House on January 19.

"It's wonderful to touch people with my story and be touched with people's generosity."