70 years on, Helen is still the one 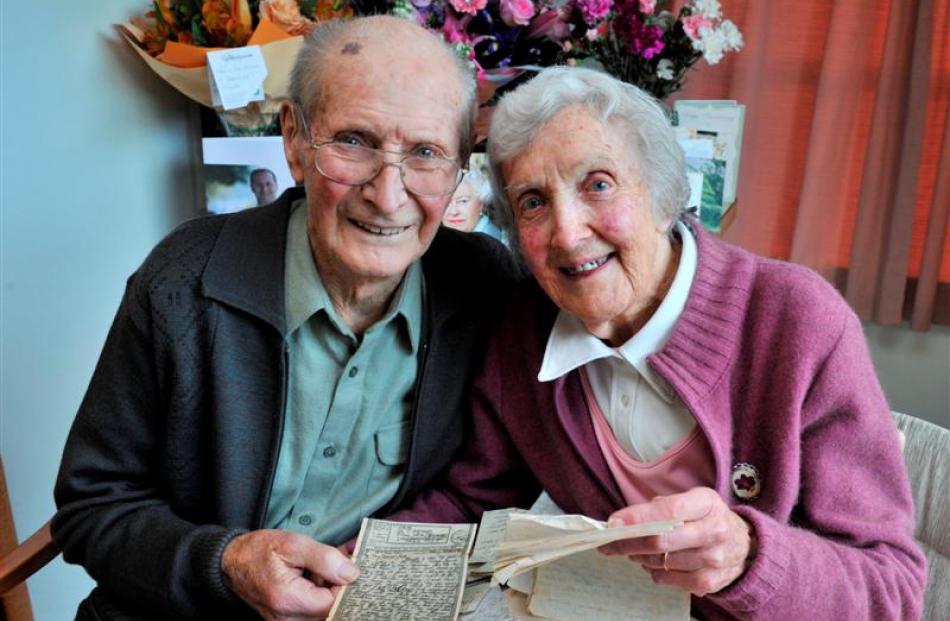 Jack and Helen Bremner, of Wingatui, who celebrated their 70th wedding anniversary this week, look through a letter Mr Bremner wrote to his wife while serving overseas in World War 2. Photo by Linda Robertson.

Returning from World War 2, Jack Bremner missed his wife Helen's 21st birthday because he was out with his army buddies, but after 70 years of marriage she has managed to reel in her soldier.

Mr and Mrs Bremner, aged 91 and 88 respectively, celebrated their platinum wedding anniversary last Saturday and will this weekend be joined by family for a big celebration.

When the couple first met as teenagers, it was love at first sight. After marrying in 1943, the couple were apart for three years until war's end - the gaps being filled with letter writing.

''He might not have talked much, but he did write a lot.''

The pair met at church, which Mrs Bremner (nee Bagnall) said was not a regular thing for her at the time and she only attended that day because her sister had spoken about three young gentlemen she might be interested in.

Her eventual husband stood out well above the rest and her vibrant personality sparked his interest.

When Mrs Bremner turned 18, they married but only after her mother got special permission from Auckland Teachers College to give her daughter a week from study to get married before he went to war.

''Mum had a soft spot for Jack and I had told her `I'm going to run away with Jack if I don't get married to him now'.''

Apart from the three years he was overseas, Mr Bremner has given her a bouquet of flowers on every wedding anniversary.

The Bremners relocated from Auckland to Dunedin in 1966 when Mr Bremner became the rector of King's High School, where he stayed for 16 years until his retirement. Mrs Bremner was also a teacher.

With a husband who sounds too good to be true, Mrs Bremner confides he had made some blues. As well as missing her 21st birthday the day he arrived back from war service, he was playing hockey when their first-born, Trevor, arrived.

''We've had our uphills. If people say they have never had an argument, well I say who's the doormat? None of us are doormats,'' she said.

The couple have two other children, Rennie and Graeme, three grandchildren and a great-granddaughter.

They both agree they have become more tolerant of the little things over the years and have grown more fond of each as the years have flown by.