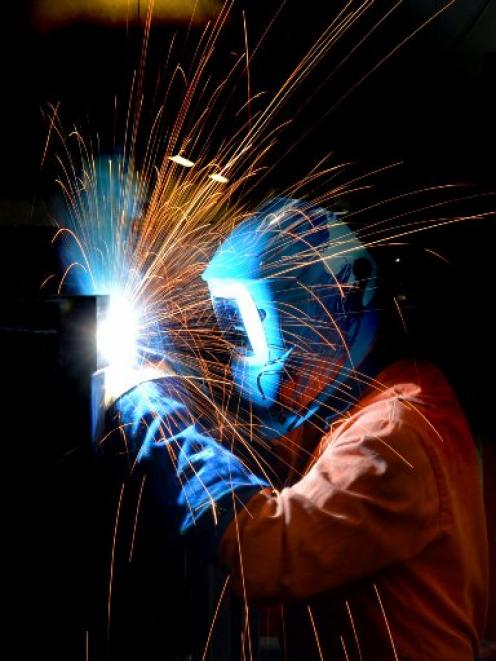 This prisoner has been spending his time inside learning a new, employable, skill. Photo: Stephen Jaquiery
The Otago Corrections Facility at Milburn opened its gates to 27 employers this week to showcase inmates' training and qualifications. Shawn McAvinue went behind the prison walls and talked to a prisoner seeking a better life on his release.

During an employers' visit to prison this week, an inmate welded skips for the Christchurch rebuild.

The Dunedin man, aged in his late 20s, who cannot be named, is inside the Otago Corrections Facility at Milburn after being convicted of violent offending.

Since 2012, he has spent six hours a day training in fabrication and welding to obtain NCEA qualifications in mechanical engineering, work for which he is paid 40c an hour.

''We work for the love here. We don't get big wages, we don't get much. We just get rewarded with education,'' he says during a smoko break.

Some fellow prisoners who reoffended have told him he is wasting his time training because nobody employs former prisoners, he says.

He has ignored the advice and found his calling.

''I found a little bit of a passion with welding. I realised I was good at it.''

The greatest reward of the work is the feeling of achievement and, after a year, obtaining an industry-recognised welding certification.

Becoming certified is ''a big achievement''.

''I haven't really achieved much growing up.''

After his release, he hopes to start a welding apprenticeship in Dunedin and is eager to work the several thousands of hours required.

He hopes a Dunedin business will employ him.

Offenders in the prison are also being trained in hospitality, carpentry, horticulture and agriculture skills.

Facility dairy farm principal instructor Tony Russell says prisoners milk about 350 cows on the 123ha farm it has owned for the past eight years.

The farm is outside the wire and prisoners need to meet strict criteria to work on it.

The farm's milk production is above the "local average" and each cow produced 400kg of milk solids in the 2013/14 season.

Some prisoners have achieved level 3 industry qualifications and the ''intensive'' training means they could ''easily'' become assistant managers after being released.

The training includes feeding about 80 prisoners with special dietary requirements such as vegetarian, vegan, dairy-free and gluten-free.

A list on the wall about prisoners' individual requirements includes a prawn allergy. Prawns have never appeared on the prison menu.

''It's quite funny when someone says [they're allergic to] lobster,'' she laughs. They do not serve lobster, either.

All of the food is prepared on site, so that the skills of a real kitchen can be learnt and prisoners can achieve hospitality qualifications up to level 3.

On the morning of the open day, the prisoners prepared lunch for the employers.

The spread included crostini with pancetta and lemon meringue pie.

As in a working kitchen, the chefs have to taste the food before it is served.

For many prisoners, it is the first time they have tasted foods such as blue cheese or smoked salmon.

A Mosgiel businessman at the open day says he has no regrets after employing a former prisoner from the facility for the past two years.

The man, who does not want to be named to protect his employee's identity, says the arrangement has worked out better than expected.

''He's always punctual, he works very hard and nothing is too much trouble - and he has not been in any trouble.''

OCF manager Jack Harrison, welcoming some of the 27 employers at the event, says it is rewarding to see a prisoner using skills obtained inside to get work on the outside and become a ''positive'' community member.

''For me as a prison manager, that's about as good as it gets.''

The employers walk among some of the 422 prisoners in the 485-bed prison.

Mr Harrison says the prison could have taken the ''easy route'', providing no training for prisoners, and locking them up 23 hours a day.

But the men would arrive at the prison angry, and leave angry, he says.

''I don't believe, in my heart of hearts, that's helping us as a community.''

Training programmes in NZ prisons
- Research shows prisoners who find sustainable work after being released are less likely to reoffend. More than 59% of prisoners participate in employment or industry training.
- Prisoners who undertake employment and training do so on a voluntary basis.
- Can train in industries such as construction, farming, nurseries, forestry, timber processing, furniture making, textiles, catering, engineering, concrete product manufacturing, printing and laundries.
- Training done through different avenues, including work environments inside the prison that match, as closely as possible, outside industry environments, industry training, work parties (low security supervised groups of prisoners work with local and regional councils, communities or businesses on work contracts outside the prison) and unit-based activities within the prison. Prisoners approaching the end of their prison sentence may be eligible to work in the community on release-to-work programmes.
Source: Corrections Department